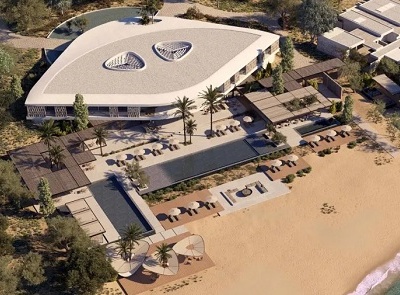 The One&Only Aesthesis Hotel on the Athens Riviera coast in Glyfada, Greece, opened its doors in September 2022. The Penetron System of concrete waterproofing was specified to provide long-lasting protection from the marine environment and durability for the below-grade concrete structures of the hotel complex.

An upscale suburb located immediately south of Athens on the Saronic Gulf; Glyfada is also known as “the jewel of the Athens Riviera.” Featuring many of Athens’ most popular nightclubs and restaurants, this city of 88,000 also has many luxury hotels that dot its wide, sandy beaches. A tram that runs along the coast and an underground metro line also connect Glyfada with the Athens city center.

Situated on a 21-hectares (52-acre) beachfront estate with a six-hectares (15-acre) forest reserve, the exclusive One&Only Aesthesis luxury hotel in Glyfada has 127 private rooms, suites, and private villas, for a total capacity of 400 beds. Most accommodations are secluded villas with private pools. The hotel is also home to two high-end restaurants, a Chenot Spa, event and exhibition spaces, and unique archeological walks.

The $120 million project was designed by J. Marneris, a Greek engineering and architectural firm, and built by Elemka, a local contractor.

“The various buildings and villas of the One&Only Aesthesis Hotel complex are all located in close proximity to the Aegean Sea,” says Theodor Mentzikofakis, Managing Director and Partner of Penetron Hellas. “This means all below-grade concrete structures – including the building foundations, basement areas, water storage tanks for the fire-fighting system, and swimming pools – are constantly exposed to hydrostatic pressure from the high groundwater levels, and chloride ion penetration from the marine environment.”

After consulting with Penetron Hellas about an optimal concrete waterproofing solution, Interbeton, the ready-mix concrete supplier, provided 5,000 m3 (6,540 yds3) of PENETRON ADMIX-treated concrete and 735 m (2,425 feet) of PENEBAR SW-55 swellable waterstop strips to seal the resulting construction joints. In addition, PENETRON, a topically applied crystalline waterproofing material, and PENECRETE MORTAR, a crystalline waterproofing repair grout, were applied to repair any cracks (wider than 0.5 mm) that may have appeared after the initial phase of construction.

How to Seal Microcracks and Pores in Concrete

Once exposed to moisture, the proprietary chemicals in Penetron crystalline products react in a catalytic reaction to generate a non-soluble crystalline formation throughout the pores and capillary tracts of the concrete. These crystals permanently seal micro-cracks, pores, and capillaries against the penetration of water or liquids from any direction – making the concrete impermeable.

“Our crystalline waterproofing admixture provides permanent protection for concrete exposed to the harsh weather conditions, a marine environment, and below-grade and water-retaining structures where hydrostatic pressure is present,” says Theodor Mentzikofakis. “The Penetron System also provides an added self-healing capability that will automatically self-heal and seal any hairline cracks that appear during the lifespan of the concrete, reducing the need for maintenance in the future.”

About The Penetron Group

The Penetron Group is a leading manufacturer of specialty construction products for concrete waterproofing, concrete repairs and floor preparation systems. The Group operates through a global network, offering support to the design and construction community through its regional offices, representatives, and distribution channels.