On May 28, 2014, The Wall Street Journal‘s "Real Time Economics" blog posted an article stating that construction loan volume is rebounding after a steep decline. According to the article, U.S. construction lending is seeing a slow, steady recovery much like what the rest of the nation’s economy is experiencing.

The volume of outstanding loans increased 2.1 percent in the first quarter from the fourth quarter to $214.3 billion, according to Federal Deposit Insurance Corp. data released Wednesday. The increase was the fourth consecutive quarterly gain for construction loans since the measure bottomed out early last year. The FDIC data cover loans for both commercial and residential development.

All told, construction lending has rebounded by 6.3 percent from its nadir in the first quarter of 2013, but it remains 66.1 percent below its boom-era peak of $631.8 billion in outstanding loans in early 2008, the FDIC data shows.

Even so, builders regard the nascent turnaround as a sign that the economic recovery, and specifically the housing rebound, will continue, albeit at a measured pace. In terms of home construction, outstanding loans totaled nearly $45.7 billion in the first quarter, up 4.5 percent from the fourth quarter. That marks the fourth consecutive quarterly gain for construction lending to home builders, though the total remains nearly 78 percent below its peak of $203.8 billion in early 2008.

Builders in recent years have pointed to scarcity of financing as a primary factor restraining home construction. Home starts so far this year are at a pace of roughly 60 percent of their annual average since 2000. Though starts increased by 7 percent in the first four months of this year from the same period a year earlier, most of that gain came from construction of multifamily projects rather than single-family homes.

“The fact that the (total of outstanding loans) has stopped declining suggests that we’ve probably worked our way through some of the more troubled lending from the past,” said Robert Dietz, an economist with the National Association of Home Builders. “It’s a positive trend, and it suggests good things going forward.”

But the 4.5 percent sequential gain in home-construction loans doesn’t include loans to developers for the acquisition and development of residential land. Lenders consider those loans far more risky than lending for construction of homes, and therefore those loans remain difficult for many builders to obtain. 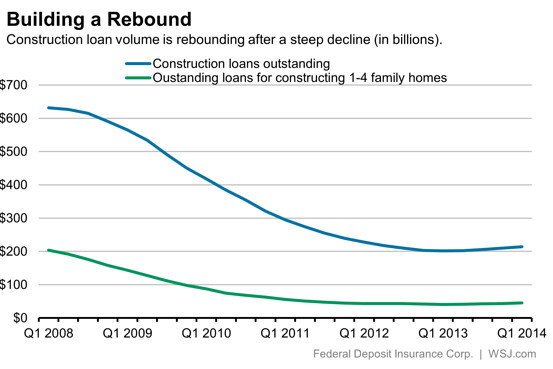