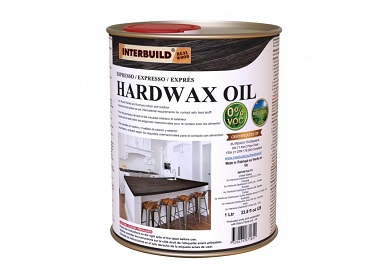 Early in 2021, globally acknowledged climate effect auditor South Pole performed a Life Cycle Analysis (LCA) of Interbuild’s Hardwax Oil. The group determined how much emissions the oil is causing during its lifetime from the sourcing of components all through to usage and disposal at the final customer.

Interbuild has compensated for the emissions actually caused. It has also committed to a plan for reducing of the already low emissions caused even further.

As a result of this, South Pole has formally approved that Interbuild can claim (and use their label confirming) that the Interbuild Hardwax Oil is Climate Neutral (Carbon Neutral).

The company treats all Interbuild solid wood products with it’s Hardwax Oil. This oil  contains no thinner or other solvents (which is customary in wood treatment oils). It has the approval (by US FDA – Food and Drug Administration) to allow contact with food. It can therefore be used for all kinds of wood, indoor and outdoor. Project ranging from deck tiles, flooring and patio furniture to worktops/countertops for cutting boards in the kitchen.

Early in 2020, Interbuild engaged South Pole as a globally leading Third Party climate related auditor. They asked South Pole to review the oil’s total effects on emissions of GreenHouse Gases. South Pole performed a LCA – Life Cycle Analysis “from cradle to grave.” This included all aspects from components, via production and transports to usage by end consumer.

South Pole determined the amount of CO2e (CO2-equivalents) that emit due to the oil (sourcing, production, transports and usage). Interbuild then paid for carbon offsets in order to compensate for the low emissions actually caused by the oil – as determined by South Pole. They then set a plan to reduce the already low emissions.

By the reduction plan and the offsets, Interbuild qualified the oil to be formally certified (in accordance with PAS 2060) by acknowledged auditor South Pole.

The management of Interbuild is very content taking this important step of sustainability. It is the hope that the market will appreciate having the choice to be able to use a wood treatment oil that is formally certified to have a net-zero of GreenHouse Gas emissions caused – low emissions to start with, a plan to further reduce emissions caused and compensating of emissions caused by investing in a socially responsible Gold Standard project.