Solo Inc., the world-wide leader and innovator in the production of backpack, hand-held and one-hand compression sprayers, offers saws with the patented iLube engine. The company’s innovative saws are effective for cutting materials such as concrete, steel, asphalt, castings or stone.

Most gasoline-powered equipment runs on a 50:1 mixture of gasoline and 2-cycle engine oil. Users must know the proper way of mixing the fuel in order to keep the equipment running effectively. An error in doing so can lead to damage to the engine and expensive repairs. With the 881 Cut-off Saw series, Solo Inc. introduced its patented world’s first iLube engine. iLube, which stands for “intelligent lubrication” system, eliminates the need for premixed gasoline. Solo Inc.’s 880 Cut-off Saws offer all the same features as the 881, but with traditional oil/gas mixing.

From a separate oil tank with a volume capacity of 10.8 ounces (0.32 liters), an electronically controlled pump adds the correct quantity of 2-stroke oil, metered to suit the engine speed, to the fuel. There is no need to premix fuel and oil. This eliminates any risk of incorrect fueling – a main cause of expensive engine damage. The full contents of the separate oil tank are sufficient for up to 20 fuel tank fillings. If there is insufficient oil in the tank, the engine automatically switches to a fault mode that reduces the engine speed to just above idling. This will also prompt a change in the engine sound compared with normal operation. This is the signal to replenish the oil tank. Instead of having to use expensive, pre-mixed 2-stroke fuel, users simply use standard fuel and oil.

Available in both 12-inch (300 mm) and 14-inch (350 mm), the 881 models are powered by a 81cc Solo German-designed and German-manufactured 2-stroke high-performance engine. An automatic choke system eliminates the need for a manual choke, and the One-Push-Stop System allows the operator to safely stop the saw with the push of a button. An innovative air filtration system, which includes an external rocker system, aids in extending the life of the air filter. Nikasil-coated cylinders and 2-ring Mahle-pistons ensure maximum service life expectancy. Solo’s anti-vibration system employs five steel springs and rubber-coated handles that significantly reduce user fatigue.

Watch a demo of the Solo Cut-off Saws. 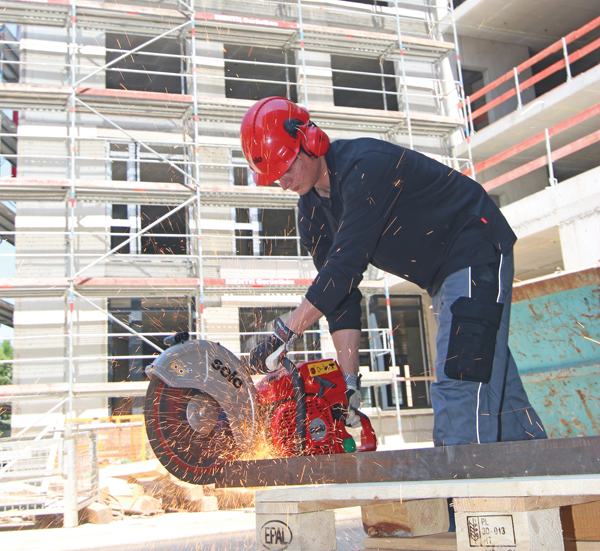