Concrete Stenciling and Flattooing for the Kids 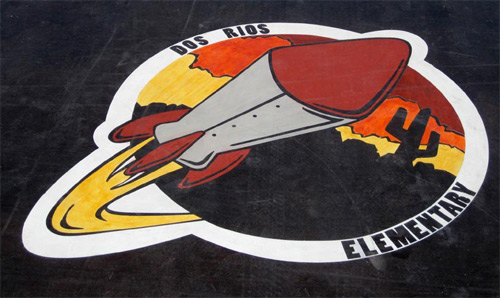 Located in Tolleson, Ariz., the project involved etching the school's logo - a rocket - into concrete outside the main entrance using various stains and a Flattoo, a stencil-like tool from Surface Gel Tek.

"It was a one-day project that took about 10 hours," says Excalibur owner Tim McPherson. "Because of the desert heat the concrete dries quicker, so you just have to work faster."

The generosity of the contractor and material suppliers allowed the school to reinvest $700 of the $1,000 raised for the project.

The project began with McPherson and his son Dustin hard-troweling the concrete and using Cohill's Super Deck Prep - diluted at 5 to 1 - to clean the slab and open the surface of the concrete.

The concrete was then acid-stained with Cohill's Earthtone Chemical Stain in Ebony. Two coats were applied at full strength to make it very black, according to Brett Lafevers, outside salesman for Cohill's.

After several hours the stain was neutralized and cleaned off, with workers using a shop vacuum to remove the excess residue from the concrete. 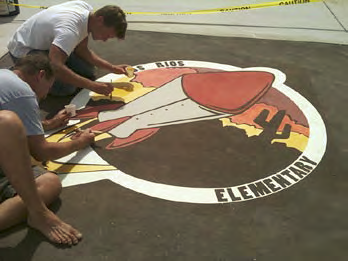 Once the concrete had dried, the rocket Flattoo was applied to the slab, with Surface Gel Tek's Tek Gel for Flattooing, a gelled acid material, used to stain colors other than black. To produce the red and gray areas of the rocket design, McPherson added Surface Gel Tek's Stain Mule and Cohill's water-based Envirostain to the Tek Gel.

The Flattoo adhered to the concrete. "That saved a day right there," McPherson says, noting that a typical stencil project involves taping the tool to a concrete surface, then taping off sections that will receive different stains and treatments.

Cohill's Pro Series New Canvas microtopping was applied over the areas that were to be white. To create the orange and the yellow areas of the rocket image, Bayferrox integral color was added to Cohill's New Canvas white.

After all materials and colors dried, the Flattoo was peeled off to reveal the finished product. The concrete was sealed with two coats of Cohill's Pro Series Clear Seal HS Sealer.

"The kids approved of the project and took photos," Fraker said, adding next year's project will either be another concrete-stained mural or technology upgrades to the auditorium.

Flattooing: The Art of "Tattooing" Images to a Concrete Surface 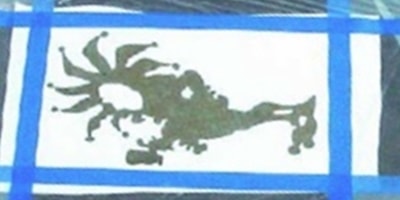 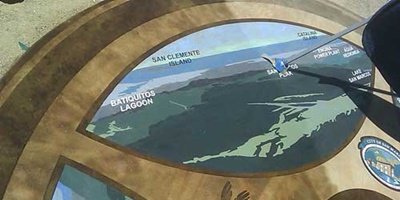 Decorative concrete is everywhere these days, even at the tops of mountains. This public art piece was installed by Los Angeles artisan Steve O'Loughlin and Surface Gel Tek president Tamryn Doolan at the top of Double Peak, a popular hiking area in San Marcos, Calif. 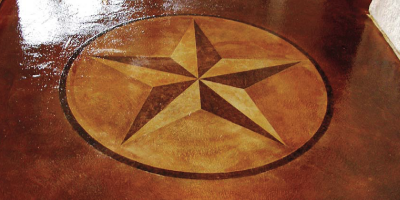 Stenciling on concrete opens the door to a world of design options that personalize and enhance a decorative concrete project. The results can be simple or complex depending on the design you are seeking.