When Rodney Robles of Lawrenceville, Georgia, decided to get back into the flooring maintenance business in 2014 after he had left it 16 years prior, the first piece of equipment he bought was one of the Lavina concrete polishing machines from Superabrasive, headquartered in Atlanta, Georgia.

Today, Robles owns five of the company’s grinders (three electric and two propane), a 36-inch planetary burnisher and several vacuums. “And I’m still looking to add one of their newly released propane machines,” he says.

He credits his rapid growth in the business to Superabrasive’s support and easy-to-use machines. “I wouldn’t have bought all this equipment from the same company if I hadn’t been convinced they were good machines and very efficient,” he says.

Reliable, affordable and easy to use

Timm Sowders, owner of 2 Palms Decorative Concrete in Vancouver, Washington, couldn’t agree more. Specializing in polish and stain work, he owns a brand-new L30G-X propane grinder with a larger Kawasaki engine. He purchased it at the Concrete Decor Show in San Diego, along with one of the company’s original 25-inch models. “It’s probably 12 years old,” he says of the older green machine. “And it’s been a real workhorse for me. I love it.”

For him, the machinery’s appeal is their reliability, price point and how simple they are to use. “Don’t get me wrong. It’s a beast of a machine,” Sowders says about his newest acquisition. “But it’s so easy to operate and handle it.”

When talking with competitors or people trying to sell him equipment, Robles says they’re always comparing themselves to Lavina, claiming to be just as good or better. “This tells me Lavina is a benchmark to others in the industry, that it has set a standard,” he says. “If others were that good, they wouldn’t have to compare themselves to another brand. They could stand on their own.”

Besides machinery, Superabrasive has made a tremendous array of diamonds since 1987 for nearly any floor application. From coating removal and texturing to polishing and maintenance, specialized tooling includes bush hammers, pcd, copper discs and ceramic discs for scratch removal. “As a result, if I run into a special circumstance I’m likely to have a diamond in my toolbox for that,” Robles says. “And if I don’t, they can provide it. Very few manufacturers can say the same.”

Cale Plowman of Concrete Expressions in Clarinda, Iowa, is also a fan of Superabrasive’s diamonds. “I use their machines and their diamonds,” he says. “It’s a package deal.” And although there may be others that are cheaper, he adds, “When I find something that works, I stick with it.”

Plowman, who has been in business since 2005, has amassed a fleet of nine Lavina machines. Although his workload can involve logos, stains and decorative saw cuts, the bulk of his business focuses on polishing and lots of it. “We stop long enough to change the grits and get back on the floor,” Plowman says. “All the grinders I have are Lavinas and I’m extremely happy with them.”

Upkeep on the machinery is minimal, he says. And his company does routine maintenance in shop because they’re easy to service. “The machines are very durable and are a great value,” he says, adding that they’re considerably heavier than some other grinders he’s used. “You can tell the difference when you try to pull them back to change the tooling. You can tell they are well-made.”

Superabrasive, which is “comfortable in its own skin,” certainly keeps its eye on what others in the industry are doing. However, it’s “not chasing the competition because it doesn’t have to.” Instead, the company listens to its customers and acts on the feedback it gets from them, Robles says.

“They are always improving their platform and adding new equipment,” he continues. “They are never sitting still.”

“I would definitely recommend a Lavina machine to anyone,” says Plowman, except to his competitors, he adds with a laugh. “I wish they would keep using Brand X.”

The Power of Diamond Grit 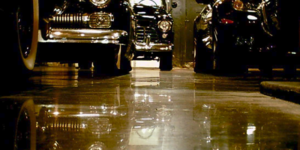 The Rundown on Concrete Polishing Machines 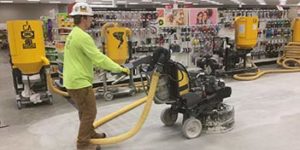 Propane Equipment Use Takes Off as Concrete Polishing Industry Grows