Going Green With Your Concrete Countertops

People are looking to go green in their homes and businesses, and not just through energy-efficient appliances and solar power. Sonoma Cast Stone Corp. is right there with them.

The Petaluma, Calif.-based company offers lines of concrete mixes that employ recycled materials but are as versatile as regular concrete. 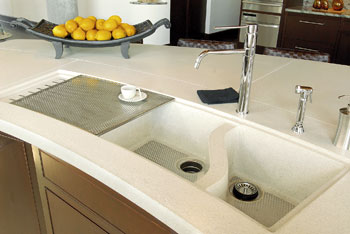 The EarthCrete formulas vary according to the application. For instance, SonomaLite is an EarthCrete product that is used for wall cladding and surrounds. It uses almost no portland cement, incorporating recycled materials instead. SonomaLite also weighs less than half of what conventional concrete does.

A second Sonoma product, NuCrete, is a precast concrete surface that comes with a five-year warranty against staining and a 5-year guarantee against cracking. In addition to countertops, sinks and other concrete products, NuCrete’s reach has stretched to include public restrooms, dining tables and commercial kitchen work tops. NuCrete is available in 20 colors and can be matched to most other colors.

Rosenblatt says restaurants and office building operators have really taken to NuCrete. “They don’t have to worry about staining,” he says. “They loved concrete but were always concerned about staining.”

So far, Rosenblatt says, NuCrete has been used for high-end work in kitchens and bathrooms.

Since the mid-1990s, Sonoma Cast Stone has developed a reputation as a leader in using recycled materials in its high-end products, as well as in manufacturing precast concrete.

The company says it is trying to develop a patented process to replace portland cement, which environmentally is the worst ingredient in the concrete recipe. Currently the mixture used by Sonoma Cast Stone averages 30 percent recycled consumer waste.

In addition to countertops and tables, Sonoma Cast Stone’s products are used in floor tiles, bathtubs, surrounds and landscaping.

Commercial landscaping in particular has kept Sonoma Cast Stone busy recently, Rosenblatt says. A number of hotels have ordered tiles and 24-inch paving stones for walkways at their facilities, he says. That is in addition to tile flooring for indoor areas, such as lobbies and reception areas.

Sonoma Cast Stone also does special projects. Rosenblatt says he is now at work on a two-ton fountain that is eight feet in diameter for the new Marin Health and Wellness Campus in Marin County, Calif. The fountain will be a bowl within a bowl, with the water overflowing from one well to another. Around the base will be inscriptions of famous quotes from such luminaries as Martin Luther King and Mahatma Gandhi.