This column has little to do with discussions of intuitive freestyle art versus disciplined mechanical graphics, or with criticism of superfluous decoration as contrasted with really spare concrete – my normal “literary” territory. It’s a column about me and a museum. It’s a tale of two topping slabs.

In 1999, I made the decision to call myself not just a concretist, but also an artist. I wasn’t really comfortable with this. That’s why I did it. I’d just completed a pivotal project, which provided a transformative experience, and I longed to stretch and grow. I wanted the return of that queasy feeling in my stomach that comes with walking the edge of a precipice.

At least once a week I was called a snake. They’d say, “Miller, you’re a snake!” And I was. I’d always been a bit of a snake. (My logo was a black adder.) It was time to make like a real snake and shed my skin. A bona fide re-creation!

The pivotal project was a wing of a Florida museum, the Charles Hosmer Morse Museum of American Art. It houses a comprehensive collection of works by Louis Comfort Tiffany, master of the decorative arts, revolutionary designer, and innovator in stained glass lamps, windows and interiors. I consulted on the placement of a small, unjointed topping slab over a deep, stable structural slab. This was simple, a slam-dunk. Subsequently, I traveled east to install a jointed, stained, dyed and pigmented overlay over the topping slab. It was a re-creation of the concrete of the historic chapel in Laurelton Hall, Tiffany’s Long Island estate.

Laurelton Hall, completed in 1905 and cited as Tiffany’s greatest work of art, was destroyed by fire in 1957. Fortunately, the chapel and many other artifacts were salvageable and moved to Florida. They became the seeds of the Morse Museum.

This was my first exposure to Tiffany’s genius. What really grabbed me was his sense of materials. Layered colors and textures … so many layers! And layers of light. He was a fine artist who not only designed, he collected and composed. What he couldn’t source, he produced. This was the core of it … not only an artist, he was a master! Like the color-makers of old, his gift was recognizing beauty in what was rough … raw, awesome glass. I can’t help myself – it was “raw-some”!

At the start of his career, Tiffany used cheap jelly jars and bottles. They had curious mineral impurities that finer glass lacked. Unable to convince other glassmakers to leave the impurities in, he began making his own. Tiffany used opalescent and variegated glass in a variety of colors to create a unique style that contrasted with painting in enamels on colorless glass, the dominant method of creating stained glass for hundreds of years in Europe. Later, he would continue to bend and meld materials and styles, incorporating fused and sculptural molded glass. If this sounds similar to the sensibilities of sensory concrete (less control beats more, more variegation beats less, question authority, burn your bra), it should.

A seed had been planted. I can pinpoint the moment of conception of sensory concrete. It began with intoxicants, followed by a heightened awareness of my immediate surroundings … a heady morning that included screed posts and the fragrance of sweat off the coarse Latin workers, followed by a lunch of sweet Cuban coffee and a Havana-style ham sandwich. Then, a sweat texture troweled into the slab. Finally, I spent a leisurely afternoon in the museum with Louis Comfort Tiffany. I spent plenty of time pondering his work while flying home.

Months passed, still 1999, and I returned to apply the finishes. This involved many steps and a lot more time. The original pieces that composed the chapel were now installed. It was stunning! Working in that space was working in the presence of God. Not like there was much pressure – rather, he was looking over my shoulder. Wonderful! Again, heady! This was a place and a moment where something important might happen.

Each step wouldn’t take long and required substantial drying time. I worked at night, so there was time to wander and peruse the museum alone. Time to study and think. Just like before, I was in awe of the materials and the man and his organization. (More than an artist, Tiffany was a visionary technologist and provocateur/promoter, surrounded by other fine artists.) I was in awe, but also inspired. I developed a plan. I was no artist, with no background or training in art, but I appreciated it, had opinions, and could speak of it passionately and with some eloquence. They weren’t educated words, but they were honest and inspired, perhaps inspirational. Sweet, simple messages from a simple guy! In addition to this passion for art and materials, I possessed a passion for concrete. I also possessed a somewhat trained but mostly intuitive understanding of this most basic, yet precious material. And what I didn’t know, I was willing to search for and discover. Just like a belief in God requires a leap of faith,

I had faith that my understanding, intuition and searching would yield success. And if not always successful, I would have enough successes to sustain the effort.

I, like Tiffany, would surround myself with artists, providing them with my passion and knowledge of concrete and a venue. I would turn artists into concrete technicians, and they would turn me into an artist. And they did! So ends the tale of the first topping slab, and how it transformed Michael Miller, the concretist, into an artist, and the concretist inc. into an art and design studio – materials-oriented, honest, willing to take chances, expecting good fortune through often unexpected results.

This year’s return
Fast-forward to 2010. I still call myself an artist – I’m comfortable with this now. The concretist inc. is still structured as an art/design studio, but the economy has shifted the nature of our projects. They’re still materials-oriented, honest, sometimes to the point of being bare bones, and still yield pleasant surprises. However, there’s one helluva lot less art, and instead, more formulaic consulting and colorist work … and we’re happy to have it! While there’s a lot less business, we’re fortunate to have enough. This includes many repeat customers. This includes the Morse. And this is the tale of the second topping slab.

I received a call from George Sexton, exhibit designer, about adding a new wing, re-creating another space from Laurelton Hall, the Daffodil Terrace. A delightful outdoor space would be re-created in an indoor atrium. The Daffodil Terrace was named after lovely floral column capitals, featuring daffodils in embedded cast and cut glass, in precast natural gray concrete. These, on top of gold-veined, pale suede marble columns. And these, on a hand-tooled, natural gray slab. That is, we assumed it was natural gray. Our references were black-and-white photos. Even if the original was pink, we were assuming a natural gray. The colorist challenge here was recreating “the patina.” By this, I don’t mean any kind of acid stain – no rusts or coppers, nothing as strong as an ebony. George and the museum director, Larry Rugerrio, were looking for the natural patina of erosion through weather and use, a slab burnished by shoe leather and heels, stained by cigar ashes, white wine, extra virgin olive oil and tannins. Not a challenge, as this about describes my patio back home after a big weekend. The real challenge was structural, in the design of the slab itself.

My idea is: We have a heavy battleship, floating on the sea. It works for our navy. It seems to have worked for me. This method of using multiple styles of reinforcement, along with a sheet-style bond-breaker, also works great on really thin (1-inch to 1 1/2-inch) slabs, including radiant-heated ones. The step-downs in steel can go from rebar to welded wire to fibers, or from welded wire to fencing material to fibers, depending upon the section of the slab and the engineering constraints. I’ve often utilized this for people who just don’t like joints. They’d prefer to take their chances with some minor cracking.

By the way, as for slab two, we’ve been back to joint and patina. There’s not a single crack, large or small! Forget about the American Concrete Institute – it seems that sometimes not even God requires a contraction joint. 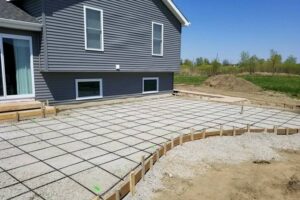 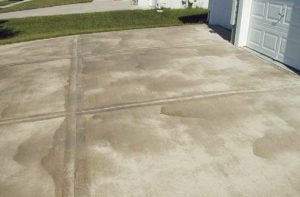 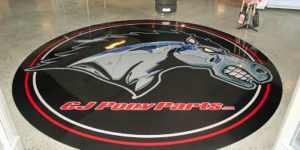