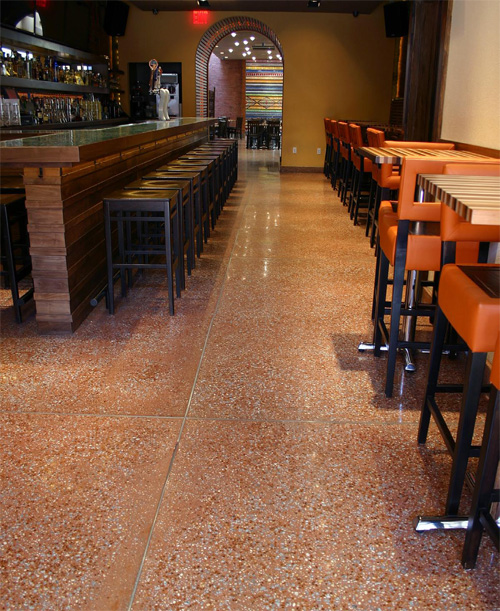 Starting a business is a challenging process no matter what the circumstances, but starting a business at 19 years old, while holding down two other jobs and working on a degree? Now that’s a challenge. And it’s also precisely how Dominick Cardone, owner of The Concrete Impressionist, got his start.

Cardone, now 46, has a come a long, long way from his days as a 19-year-old flatwork finisher, and the journey has been an interesting one, to say the least. In the early ’80s, when he was just getting his start, Cardone says the industry was incredibly competitive. There were a lot of people in the business who weren’t licensed, weren’t insured, and were underbidding Cardone left and right, he says. Rather than try to beat their prices, Cardone’s solution was to change gears entirely. For the first decade of his career, this soon-to-be concrete artisan did pretty much everything except concrete.

“From ’85 to the mid-’90s I was a general contractor,” Cardone says. “High-end residential interiors, retail, restaurants, you name it.” His company, which he managed, then as now, with his wife, Janine, relied a lot on renovation work and even had annual contracts to construct and maintain some of the big Manhattan Christmas installations. “I had really made the transition to the construction world,” Cardone says of his first decade. 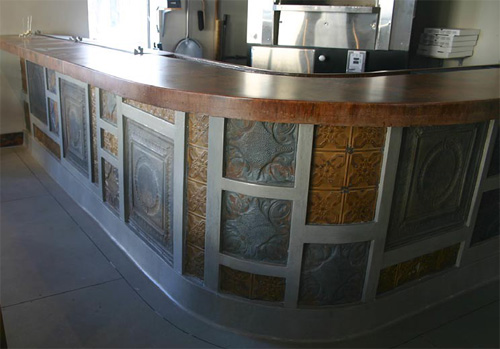 Cardone’s zeal for countertops was enough to pull his company firmly back into the realm of concrete, and it wasn’t long before other decorative techniques caught his attention. Cardone connected with Bob Harris, of Decorative Concrete Institute fame, and the two quickly became friends. Harris helped Cardone broaden his decorative concrete horizons, and more and more services, such as acid staining, pattern stamping and microtopping application, found their way onto The Concrete Impressionist’s list of services. Thus equipped, the company — comprised of the Cardones and their crew of half a dozen concrete craftsman – set about making a name for themselves as trailblazers in the decorative concrete world.

Making a splash
Take for example, the company’s custom concrete tiles. For years, the company’s bread and butter was countertops and other concrete elements (with a healthy portion of stamped concrete and interior floors as well). Working on so many kitchen counters, Cardone saw an opportunity to offer clients some added value by manufacturing and installing custom concrete tile backsplashes. In a kitchen with big monolithic countertops, a big monolithic backsplash can be “a little much,” he says. Concrete tiles let them continue the concrete theme without weighing down the design aesthetic. 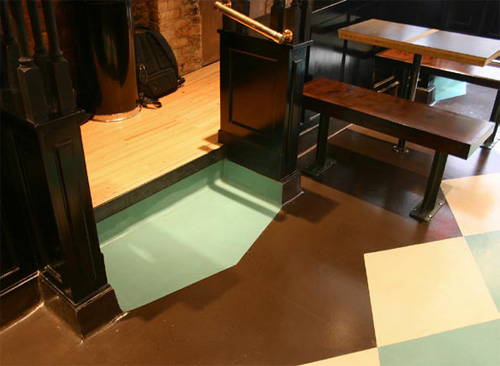 Although Cardone says there’s not a huge market for the tiles (yet), they’ve come in handy for more than just backsplashes. For example, when he worked on a nightclub in West Hempstead, N.Y., back in 2003, he says the owners really took to the Concrete Impressionist team and gave them a pretty free hand with the renovation. “It turned into a concrete playground,” he says. In addition to concrete floors and tables, Cardone sheathed one of the club’s walls in charcoal-gray concrete tiles. The concrete bar top was also a high point — it was one of the first, if not THE first, bar top done with embedded fiber optics.

Discovering gold
Although the company’s fiber-optic work has definitely become a trademark — Cardone has taught several fiber optics classes, both for the DCI and for the American Society of Concrete Contractors’ Decorative Concrete Council — they have one other specialty that rates even higher on the extravagance scale: gilded concrete.

Going back to the Cardones’ days maintaining Manhattan Christmas installations, one of their responsibilities was to keep the displays in good condition. Because many of the decorations involved gilt, Janine mastered the craft, studying, in fact, with a world-renowned gilder. After some experimentation to find a topcoat that wouldn’t discolor the gold leaf, gilded concrete was born, and the technique has turned into, if you’ll excuse the expression, quite a gold mine. 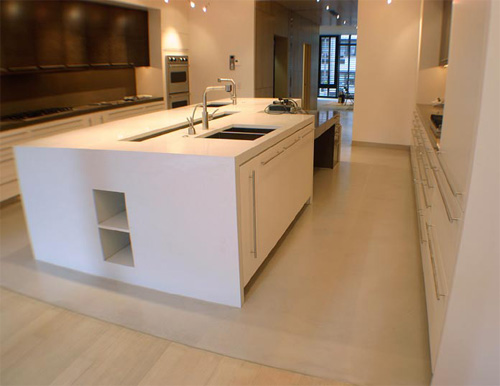 Doing most of their work in Manhattan, The Concrete Impressionist boasts a clientele that is pretty upper-crust for both their residential and commercial projects (they do about half and half). It was this experience with high-end clients, combined with their gilded concrete specialization, that landed them the contract for Reem Acra’s Fifth Avenue boutique. A world-renowned fashion designer, Acra produces a line of luxury bridal and evening wear and is known for incorporating real gold fibers into the embroidery of her garments. The Concrete Impressionist’s gilt floors were a perfect fit. Using a custom Modello Designs stencil, Cardone and his team installed 22-carat gold leaf in a design over an integrally colored floor.

Little did they know four years ago when they did those first floors that Fifth Avenue was only the beginning. This fall, Cardone and his crew flew to Beirut, Lebanon, Acra’s hometown, to install the now-signature gilt floors in her newest showroom. Although Cardone has worked on projects all over the States, this was his first international job – and boy, was it a doozy.

Reem Acra had contracted them just to finish the floors, while a local contractor was going to do the actual pour. Unfortunately, when Cardone and his team arrived, the floor wasn’t done, the products on hand weren’t the ones he said he would need, and the local contractor had added almost 200 grams of integral color to the mix when Cardone’s instructions had been to use 6. After two days trying desperately to save the floors, Cardone and his team hatched a plan (at 2 a.m., at their hotel’s rooftop bar). A coat of properly colored 100-percent solids epoxy would get their floor back on track. But where to find it?

The following morning, Cardone met with the project’s GC, who took him to a local hardware store. 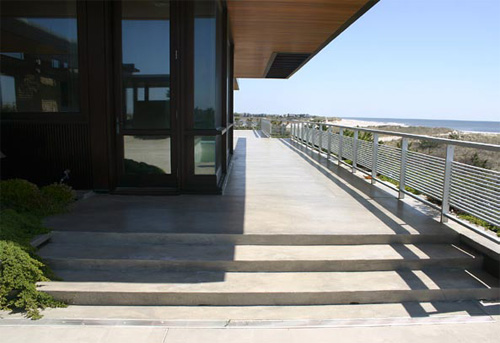 “In the middle of a place where a paper towel is a luxury,” Cardone says, “we went into this store, and up on the wall are gauge rakes and spiked shoes. I wanted to cry.” The fates smiled on them further – the store happened to carry the exact integral color Cardone had used in the Fifth Avenue store.

After losing four days to rescuing the floor, Cardone and his team finished the job just in time for the boutique’s grand opening.

“It was a great experience,” Cardone says. “I said I wouldn’t, but I’d do it again in a heartbeat.” 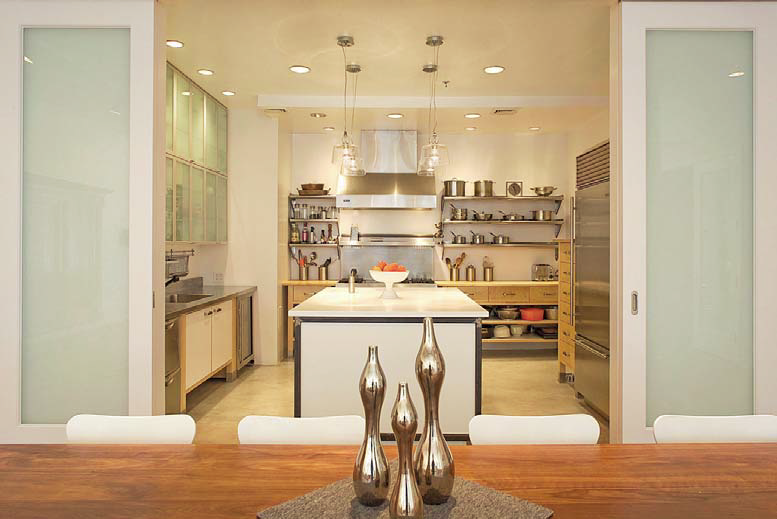 Good thing too, because Cardone’s adventures aren’t over. Reem Acra has more international locations in the works, and Cardone is on the books for all of them.

But whether Cardone is halfway across the globe, doing luxurious floors for the fashion elite or installing a simple, well-poured, hand-finished floor in a West Village walk-up, you can be certain of one thing: He’s sure to leave an impression. 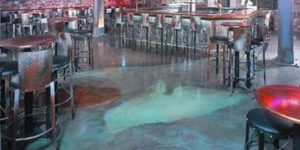 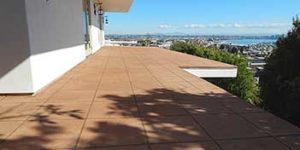 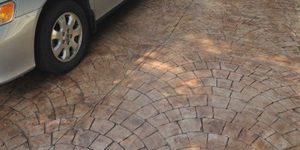