Just east of the Cascades, between Ellensburg, Wash., and Yakima, is one of those places. As the concretist, we’ve worked both internationally and nationwide. You might find us working just about anywhere. But we’ve done more jobs in a 30-mile radius between Ellensburg and Yakima, than just about anywhere else. Believe me, this is no major population center. But the concrete there has been sweet, and the people have been warm even while the weather has often been not so warm. We love this place — the Washington wine country.

I’ve just been back to another such place, where my fondest personal and sensory concrete memories mingle. We haven’t done quite as many jobs in Casper, Wyo., as in central Washington, but we’ve done enough. They love their concrete in Casper, and they know how to do it right. And people who love concrete are my kind of people. 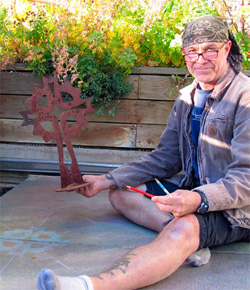 Art Boatright is the president of Mobile Concrete, a ready-mix producer in Mills, Wyo., just outside of Casper. He was born and raised there but attended college in California. This must have tweaked him just enough to allow him to develop certain unusual tastes: proclivities and fantasies involving variegated patina stains and sensory concrete.

It’s the late ’90s and Art’s building new offices for Mobile. Some glass, some steel, but mostly concrete. When we arrived in Casper, our primary scope of work for him was to stain some 10,000 square feet of suspended and basement-slab concrete. It was now time to indulge Art’s fantasies. Our job was the interior slabs, but so often, we arrive, meet the folks, take a look around and see what more needs doing, what is truly appropriate for both the client and the site.

In the case of Mobile, Art was interested in having a really special reception lobby. He was in the process of completing a totally cool (deep and massive) purple-brown integrally colored receptionist’s desktop. This was out of precast, and it was to be integrated within low walls of cast-in-place natural gray.

He also had an equally massive concrete fireplace in the middle of the lobby as a focal point. Square block-outs above the firebox were stacked vertically, two on each side. These were there … for what? Really boring! They begged for something more.

The bulk of the floors had minimal jointing, but this lobby had been jointed with something like a 2-foot grid. It was obvious that it was an area of special emphasis, and Art would want us to spend more attention on color and details there. Can do!

Leading to this interior lobby was an exterior sidewalk. Nice, but kinda plain. This seemed a natural place to begin clients’ introduction to the “Mobile Concrete Experience” and their sensory concrete journey.

The North Platte River is a wonderful resource and a distinctive part of Casper. It also runs smack dab through the middle of the Mobile Concrete property. So, we began our journey at the river (a bit icy in December) to look for site-specific clues, inspiration and elements we might incorporate in what we were about to do.

Dyes and colors — and fish for stamps
And this is what we did: The bulk of the slabs were patina-stained and dye-washed in a variegated “iron-y” (as is ironlike, not ironic) purple-brown, with Ironite spotting. These were similar in color to an old rusted railroad trestle.

We filled the ho-hum square voids in the fireplace with art panels that were stained and dyed Sgraffino-skimmed cement board. The Sgraffino was imprinted and embedded with found objects from the North Platte River, such as grasses, pebbles and even fat brown trout. The fish were caught in the river and placed in the wet Sgraffino overlay. Slime on the fish acts as its own release agent. Wait ‘til the next day, when the skim is hard, and the fish are easily removed. Scales and all details are perfect, like a Japanese fish print! If they were removed earlier (as in a stamp), the details are smudged and not crisp.

This is a hybrid application, where the fish are impressed like a stamp, but left in place until the mud is hard, more like a form liner.

The same is true with the grasses. They were harvested from the riverbank, scattered on the wet mud, impressed, and removed the next day. Pebbles from the river’s edge were inlaid and left in place permanently. 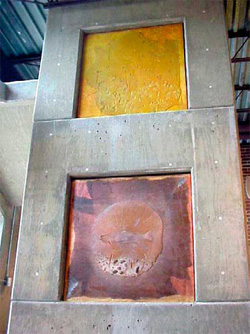 The 2-foot grid on the lobby floor at the base of the fireplace was stained and dyed in much brighter and more saturated colors: reds, oranges and yellows. The occasional corner was flashed with a shading lacquer containing metallic pigments.

As for the front sidewalk, we sealed the on-grade, cast-in-place, natural gray sidewalk with a solvent-based acrylic (which would also, later, act as a resist). We then sandblasted through a plasma-cut steel template. Blasted graphics were based on aggregate shapes, ancient alluvial deposits from Mobile’s quarries, with the very occasional stray leaf and rattlesnake thrown in for fun and shock-value.

Where sealer (acting as a resist) was blasted away, the graphic was subsequently patina-stained.

Meet the Lowers
We’ve been back to Wyoming several times since the ’90s: once to visit Yellowstone and Jackson Hole with Art and his wife, Lynette, once to stain floors and walls for a new Boys Club. And once with our youngest daughter and her boyfriend, who was attending college in Laramie at the time, for a blizzardy Thanksgiving with the Boatrights.

It’s now early November 2010. I arrive in Casper and am picked up at the airport by a guy whose e-mail address begins with “fatbob.” And I’m a bit surprised and confused, as structural engineer Bob Lower isn’t really fat at all. But he is warm and jolly.

We pass fat antelope grazing at the airport, too numerous to count, and make our way to Lower’s downtown residence. I meet his wife, Teresa, and their two lovely daughters. I get a tour of the house (where I’m looking for their penchants in colors and other design clues). Eclectic bright colors. Edgy, funky art and lots of crosses. This tour also includes the patios and sidewalks I’m about to stain.

Wow … sophisticated construction! Cast-in-place and precast. Old and new concrete. A new suspended deck. Wild structural shapes, including lots of circles. This guy may be a structural engineer but he’s no square.

Father, forgive me for what I am about to do! I say this before just about every new job. HA! It helps me settle that familiar queasy feeling, the one that I’ve come to terms with, that I now recognize and even enjoy. The one that comes with the start of each new sensory concrete journey working without a map.

Neighbor Art Boatright shows up. The cork comes out of the bottle, and we start talking concrete. 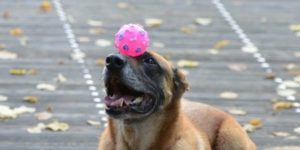 Tips and Hints from the Concrete Pros 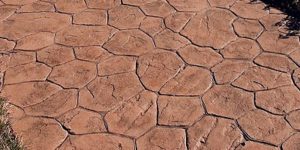 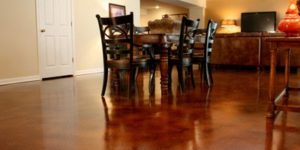