The historical structure that now houses the Nashville Dinner Theatre has always attracted attention. During Prohibition times, people slyly used a tunnel in the building to transport alcohol to area nightclubs. Today, it attracts crowds for its dinner shows and performances by local vocalists. And thanks to a group of decorative concrete professionals and artists who donated time and materials, the building’s floors and bar tops are attracting a lot of attention too. Last summer, Nashville Dinner Theatre owner Kaine Riggan wasn’t sure what the fate of his venue’s worn-out floors, which had last been treated with a wood laminate product, would be. But in September, staff of Professional Trade Publications Inc. (which publishes Concrete Decor magazine) were in Nashville to plan the 2011 Concrete Decor Show & Spring Training. They stopped by the soon-to-open theater and noticed that its floors could use an overhaul. Looking to coordinate a project that would generate buzz for the upcoming trade show, Concrete Decor publisher Bent Mikkelsen proposed a theater floor makeover to Riggan. Mikkelsen then connected Riggan with Lobdell and Samford, who agreed with enthusiasm to complete the job, and found them some suppliers for materials. Each one of the project’s workers and suppliers provided time and products free of charge.

“I had been waiting for a chance to give Nashville national exposure, so when Bent called me, I didn’t hesitate to jump on the opportunity,” Lobdell says.

The project’s timeline posed a challenge to workers — in order to meet the theater’s scheduled opening date of Nov. 12, 2010, they had just two and a half weeks to complete installation. 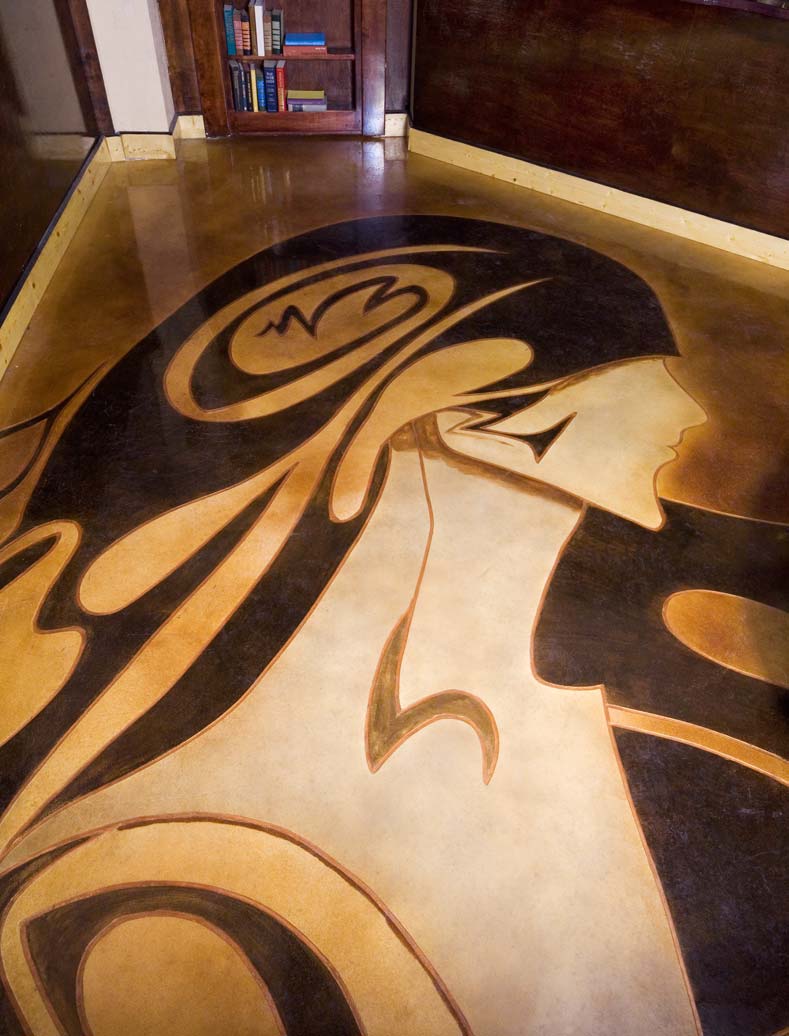 Floor show
First, leftover residue was removed from the theater’s entire floor surface with a Werkmaster grinder and diamond tooling. Next, using products donated by H&C Concrete Coatings, Lobdell, Ryan and Drake took three days to overlay, design, stain and seal the floor of the main theater. The floors of two balconies located in the main theater were coated with products from H&C Concrete Coatings, SkimStone, Elite Crete Systems and Surface Koatings Inc. Drake installed H&C’s Heavy Traffic Resurfacer Texture System on the main theater floor, and Lobdell then etched designs into the floor using a hand grinder. The theater floor was stained with H&C’s Semi Transparent Decorative Stains (which were chosen for their fast-drying quality) in Poppy Bloom, Dahlia Red, Cordovan and Obsidian, and it was sealed with three coats of H&C High Performance Industrial Clear Sealer.

The focal point of the main theater floor is a giant fleur-de-lis design, which Lobdell said he chose after considering existing elements in the space. The design portion of the project wasn’t so challenging for Lobdell. A graduate of the Savannah College of Art and Design with an M.F.A. in painting and background in theater, he knows a thing or two about art — and about the type of client he was working for. “I understand how theaters run and the mentality and feel of a dinner theater,” he says. “The main theater has wrought iron railings with fleur-de-lis medallions, and when I saw them I thought, ‘That has to be one of the main images in the room.’” Let’s all go to the lobby
The next floor space workers tackled was the theater’s front lobby. With input from Mike Samford, Lobdell designed an art deco-style image depicting the profile of a woman with flowing brown hair. Drake first installed two layers of Elite Crete’s overlay system (one layer of Thin-Finish and one layer of Micro-Finish). Then, Lobdell used a hand grinder to carve the design into the floor, and with help from Ryan Samford, added color with Surface Koatings’ Kolour Dyes in Sun Buff, Taupe, Caramel, Chocolate and Walnut. Finally, Ryan filled in the engraved lines with Elite Crete’s E100-PT1 Fast Clear Epoxy mixed with Elite Crete’s Reflector Enhancer, an Elite Crete admixture that produces shimmer and texture, in Brass to make the epoxy nontransparent. He finished the entire floor with a topcoat of the same epoxy mixed with a hint of the Brass Reflector Enhancer. The front lobby was completed in three days. The Climax
With just one and a half weeks of time remaining, Lobdell and Ryan split up the next portion of the job to complete two rooms simultaneously. Lobdell got to work on the building’s lower lobby, which is located at the base of a staircase. Wells and Lobdell designed detailed images of an attention-drawing “Phantom of the Opera” character and a three-dimensional spiral staircase, which creates the illusion that the lobby’s staircase goes on longer than it really does.

“The first thing I saw in the lobby was the staircase, and I thought, ‘Wouldn’t it be cool if the staircase were bigger?’” Wells says. “It had to look believable, so I had to draw the image at just the right angle.”

Drake first installed SkimStone’s Type I and Powder (the two components that comprise its overlay system) in the lower lobby. Then, Lobdell and Wells hand-painted the cloaked phantom character and spiraling staircase onto the floor using a mixture of SkimStone’s Type I Solution, Powder and ColorPaks in a variety of shades, including Minoan Red and Sapphire Blue. They sealed the floor with three coats of sealer and two coats of high-gloss finish, both by SkimStone.

In the meantime, Ryan got moving on the two levels of flooring in Randolph’s. Using Elite Crete’s E100-PT4 Colored Epoxy Coating and Reflector Enhancer, the bar’s floors were brought to life with thick curves, swirls and lines in brass, coffee, blue and silver hues. Mike echoed the vibe of the floors on Randolph’s bar top — he created a fun, flashy look with materials such as marble chips, brass wires, and wooden rods that were soaked and bent into curves.

“The idea for Randolph’s was ‘obnoxious, art deco flashiness,’” Ryan says. “We wanted glitz and glamour, and it looks awesome now. It needed more pop.”

Lobdell and Ryan agree the project’s demanding schedule was a challenge, but so was working with a long list of materials, some of which they had never used before.

“We were out of our comfort zones with some of these materials, and on top of that, we were doing some of the hardest designs you can think of,” Lobdell says. The hard work artisans and contractors put into the project resulted in much praise. Nashville Dinner Theatre owner Kaine Riggan says he keeps a stack of the artisans’ business cards handy because people often ask him who did such a nice job on the floors.

“It’s gorgeous work, and it’s very artistic,” Riggan says. “When you walk inside, you’re not just walking through the halls of a historic 1880s building. There’s a canvas under your feet.”

Because of the publicity the project gave to each contractor, artisan and material supplier involved, not one of them viewed working or supplying materials free of charge as a burden. H&C account executive Thad Bradley says H&C was happy to participate when offered the chance. “I’ve been getting to know Rick over the past few years, and when he called, we pressed the button immediately,” Bradley says. “We knew it would be a high-profile job and were able to hop all over it. It says to people in the industry that we’re in business, we have a great product line, and this is the kind of service we can give to the customer.”

Lobdell notes that one of the project’s most rewarding aspects was creating a work of art that will be recognized and enjoyed as a Nashville landmark for years to come.

“We got the opportunity to make a new icon for Nashville,” Lobdell says. “I’m hoping these floors will survive the test of time and that people will love the place itself, not just the shows that are performed there.

Duration of project: Two and a half weeks If you want to install garage floor coatings properly and create a profit, you must understand that not everyone is your customer. The price tag on the kit in the box store has already created a perceived value or cost to complete the job in many customers’ mind.