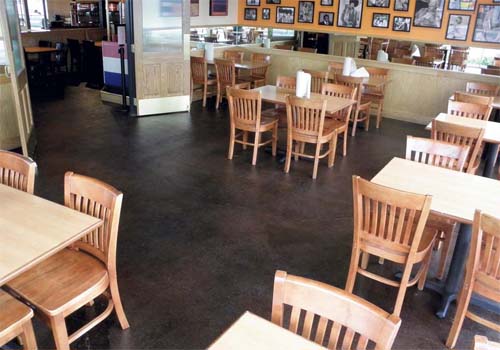 After three years of spilled milkshakes, splattered ketchup and oversquirted mustard, the carpet in the dining area of the Fuddruckers in Modesto, Calif., had to go. Franchise owner Kevin Bidlack considered replacing it but knew the fix would be temporary. Three years later, he’d have to do it again.

The gourmet burger restaurant’s carpeting also had upkeep issues. “I would have the carpet deep-cleaned every two to three months but it would only smell clean for a day or two,” Bidlack says.

However, refinishing the existing 3,000-square-foot concrete slab underneath would be an investment in time, a precious commodity for a business that depends on cash flow. “If I just swapped out the carpet, I could have closed early one evening and opened up the next day,” Bidlack says.
Instead, he closed for 2 1/2 days, trusting a contractor’s commitment that a long-lasting quality concrete product could be delivered on time.

A sticky glue issue
Tearing up the carpet and removing it was a snap, says Mark Butler, vice president of Concrete Technology-Modesto, the company that got the job. But removing the adhesive was another story. Commercial carpeting, he explains, doesn’t have a pad — it’s glued straight to the slab floor. And a small miscalculation put the time-crunched schedule in jeopardy.

The initial area Concrete Technology-Modesto head foreman Colin Sparkman tested only had one layer of glue, which easily came up. Unfortunately, he laments, the rest had three to four layers. “I had to bring in a couple of extra guys to keep the job on schedule.”

With three crews of 10 working around the clock, they removed the adhesive with sling-arm buffers and Citrus-Scrub 90, a commercial adhesive remover from Hillyard Inc. “We had to stay with a low-odor material because we were dealing with a restaurant,” Sparkman says. “We couldn’t use anything really aggressive.”

When the adhesive was removed, they lightly sanded the floor to open up the concrete’s pores so it could better accept a colorant.

Bidlack wanted a rustic, distressed look for his restaurant. Sparkman initially suggested using an acid stain but nixed the idea because the process takes too long. Dyes, which like acid stains can produce deep brilliant colors, were a logical option.

“Typically it takes anywhere from 24 to 48 hours for an acid stain to penetrate and chemically react with the concrete,” Sparkman says. The copious cleanup process usually takes another day, and then you still have to seal. Overall, an acid-staining project this size usually takes five to seven days. This one took less than three.

A look to dye for
To color the floor, Sparkman chose QuickDye, an acetone-based material for interiors from Concrete Coatings Inc. that’s easy to apply and can be sealed quickly. His crew, he says, had never used QuickDye but had no trouble applying it. “They were flabbergasted at how little time it took to get such great results.” 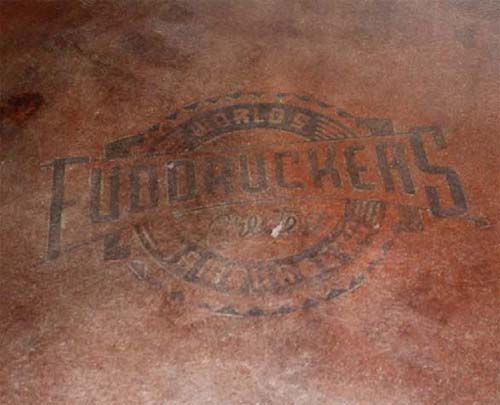 The client also got the rustic effect he wanted. In a couple of hours, the crew sprayed a combination of Mahogany, Walnut and Ebony dyes to achieve the desired mottled look without having to wait for a chemical reaction. They removed dye residue by washing the concrete with an autoscrubber for less than four hours. The final step involved applying two coats of Aquathane 6000, a food-safe sealer from CTi.

Sparkman says he didn’t even consider water-based or acrylic stains for this job because in his experience a lot of them tend to fail in high-traffic areas. “I wanted a dye that actually penetrates the concrete, so when chairs scrape across the floor, color will still be there. With universal stains, the color just sits on top of the surface. Scrapes easily show.”

If the floor gets mangled from something like a refrigerator being dropped or dragged on it, water-based and acrylic finishes are hard to fix, he says. “I’ve run into that situation with other commercial jobs and matching up the color was a nightmare. I’ve had to reglaze the entire floor to fix the problem.”

With QuickDye, he says, you can easily touch up marred areas. “As far as blending goes, you can get the same mottled effect time and time again.”

But precautions need to be taken when applying acetone-based dyes such as QuickDye, Sparkman says. They’re highly flammable, and respirators must be worn because of the fumes. “We had fans running the whole time and had to shut off all the pilot lights, including the one for the hot water,” he says. “We had to bring in our own hot water.”

According to Brandon Gutierrez, director of marketing for Concrete Coatings Inc., dyes are prized for their consistency and ease of use. “People really love dyes because they can be used by themselves or as a touch-up to acid stains that don’t react with certain areas of concrete.”

Challenge: To get the entire job done from removal to completion in less than three days.