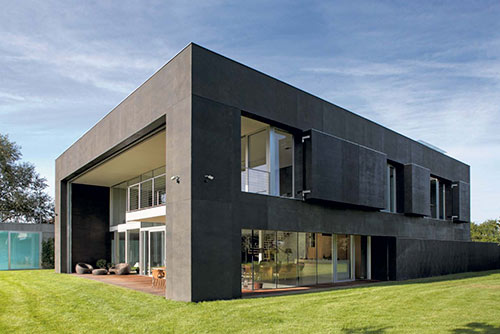 Often, in the process of selling a client on the advantages of concrete, contractors or designers essentially break out a laundry list: It’s durable. It’s versatile. It’s green, design-friendly, affordable, and on and on. Thanks to Safe House — edgy concept home by day, impregnable concrete fortress by night — we can now add “zombie-proof” to the list of concrete’s marketable features.

Designed by KWK Promes arch. Robert Konieczny, an architecture firm based in Katowice, Poland, Safe House was built for a couple whose “top priority was to gain the feeling of maximum security in their future house, which determined the building’s outlook and performance,” wrote lead architect Robert Konieczny on his firm’s website.

Thanks to Konieczny’s radical design, the project has not only satisfied his clients but has also become somewhat Internet-famous, described as the world’s first zombie-proof dwelling on dozens of architecture websites and nerd-culture blogs. Konieczny says the undead angle sort of diminishes the point of the house, although he doesn’t seem terribly troubled by the home’s oddball notoriety either. “Some people have a very superficial outlook on Safe House. They don’t entirely understand the idea,” he says. “We can only shrug our shoulders and be happy about the positive comments of those who understood the concept.”

Located on the outskirts of Warsaw, amidst a sea of stark, modernist homes from the ’60s and ’70s — Konieczny refers to them as “Polish cubes” — Safe House certainly sticks out, if for no other reason than it takes the concept of cube to a whole new level.

When closed, the home resembles nothing so much as one of those perfectly square Borg spaceships from “Star Trek: The Next Generation.” The walls appear to be smooth and seamless, giving the house the look of a mammoth, 6,000-square-foot concrete building block.

When in open mode, Safe House becomes better suited to an architecture coffee table book than a science fiction TV show. Huge portions of the cube slide, swing or roll away to reveal glass facades, rich alder-wood decking and luxurious interior design. A drawbridge swings down to connect the home’s upper level to the roof terrace atop the pool house. A huge rollaway door disappears, opening the entire southern face of the home to the beautifully manicured lawn. Massive shutters, easily 2 feet thick, swing out to let light flood the interior.

In his description of the project, Konieczny compares the open and shut design of Safe House to daily cycles in the natural world. “Every day the house acts in a similar way — it wakes up every morning and closes up after the dusk,” he writes. “This routine reminds us of the processes occurring in nature — the house resembles a plant in its day and night cycle.” And looking at photos of the house as it’s opening, it does indeed resemble a massive, blooming concrete flower.

The home’s monolithic structure is all reinforced concrete, chosen, says Konieczny, for its strength and durability, both good qualities for a hypersecure home. “I like working with different materials —everything depends on the concept of the building,” he says. “I used concrete (for Safe House) because it is a very good structural material. It was perfect for this task.” 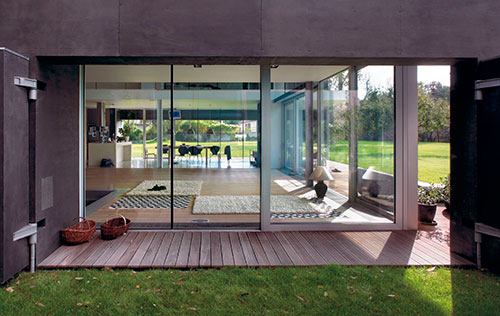 Part of what makes the Safe House design so compelling is the apparent ease with which its impossibly heavy-looking walls and shutters slide open and closed. But there was no clever mix design or revolutionary additive employed to bring those pieces down to a manageable weight. Instead, KWK Promes achieved the effect with a little cementitious slight of hand. Rather than concrete, the movable elements of the house are actually an insulated steel framework clad with cement-bonded particleboard, a composite material made from mineralized wood chips and portland cement. To complete the effect, Konieczny also enclosed the rest of the home’s exterior surfaces in the same material, making it impossible to distinguish real concrete from the make-believe.

KWK Promes was originally approached to do this project because the clients had seen a write-up of one of the firm’s previous homes, Broken House (worth Googling). “The functionality and aesthetics of that house convinced (the owner) that he could entrust us with his project,” Konieczny says. And fortuitously, such cerebral projects are KWK Promes’ specialty. 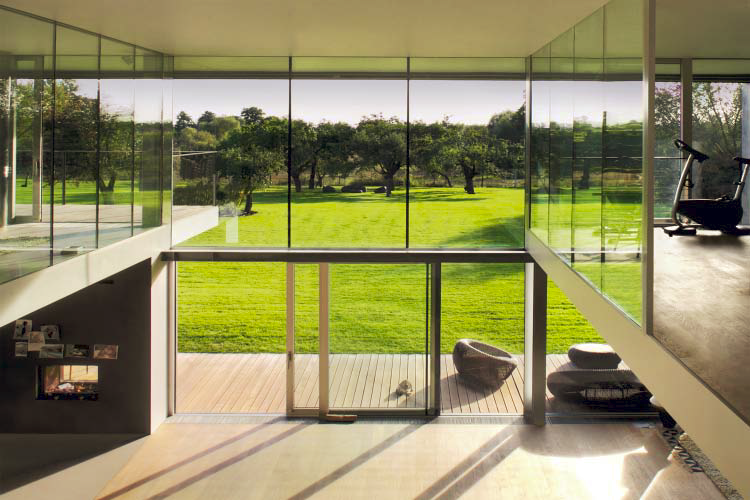 “In designing, the most important thing for me is the conceptual approach. I think I can even call myself a conceptualist,” says Konieczny. “Consistently following an idea often forces us to get rid of our habits and sense of taste but also gives us the possibility to achieve unprecedented things.” And unquestionably, Safe House is one such case.

“The innovation of the project is not found in the block of the house itself, but in the two movable walls, which change the functional layout of the plot,” Konieczny says. The two walls he’s referring to are huge, 7-foot-tall sections that are 50 and 72 feet long, respectively, and extend out along the sides of the house, at the push of a button.

Getting at that central concept of security, it was important for the owners to feel equally safe whether the house was closed or not. When it’s closed, the security is an obvious product of the house being completely sealed to the outside. But when it’s open, the security perimeter actually extends to include the entire property. As the flower blooms, so to speak, those two key walls slide back to enclose the whole yard and create a small, airlock-style front courtyard. No entry to any part of the lot is possible without first passing through that entry space. Besides security, another useful aspect of the wall configuration is that the owner’s children can have free rein of the garden with no concerns about them wandering where they shouldn’t.

“To design Safe House was a very complicated venture, which needed individual solutions, very often created from scratch,” says Konieczny about the challenges of the project. “The most important thing was to keep the cohesion between the idea, the functionality and all of the complicated and difficult technology used in this house.”

As challenging to design as Safe House may have been, it is easy to see its success in providing a haven from the perils of the outside world — be they undead or otherwise.

Clients: A security-minded couple to whom privacy is also important.

Scope of project: A 6,000-square-foot semimechanized concrete home on the outskirts of Warsaw, Poland, designed not only to embody groundbreaking modern design but also to meet the clients’ rigorous security requirements.

Duration of project: Design began in 2004, construction completed in 2009. 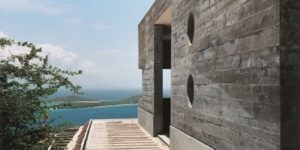 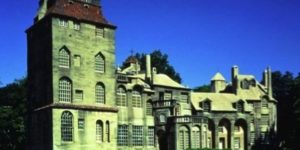