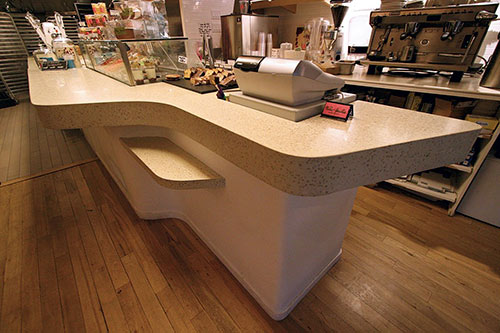 Dominating the interior of Mille-feuille, a tiny bakery and cafe in New York City’s Greenwich Village, is a massive pale beige countertop, all smooth concrete curves and subtle flecks of off-white marble. The piece is the work of Passaic, N.J., decorative concrete contractor Remigiusz “Remik” Iwuc, owner of Concrete Shop. In Remik’s eight years as a concrete fabricator, he’s done his fair share of complex projects. But with two architecture firms involved, a pair of hands-on clients with engineering degrees, and a design with extreme performance requirements and no margin for error, the Mille-feuille project represented something of a perfect storm.

A tasty concept
First, there was the countertop’s origin. Bakery owners Olivier and Nathalie Dessyn visited New York on vacation from Paris, back in 2009, and promptly fell in love with the city. Although both of the Dessyns were career engineers, Olivier had also trained at a prestigious pastry school in Paris, and he and Natahalie had always dreamed of opening a pastry shop someday. Well, their trip to New York convinced them that the time was now, and the place was New York. Olivier spent a year preparing things: procuring a location, finding investors, and developing with a preliminary design for the space — and the countertop.

“My view was to open up the pastry shop’s interior,” Olivier says. “I didn’t want to work in the back and be separated from people. I wanted to be able to talk and interact with the customers.”

Olivier took his concept to Agence Jouin-Manku, a Paris-based architecture firm and rising star on the international design scene. Olivier pitched not only his concept for the space, but also his passion for pastry and his family’s plans to open a cafe in Manhattan, confident that it would resonate with the jet-setting design luminaries. “I bet that they were going to like such an entrepreneurial project,” Olivier says, and he was right.

After a couple of months, the firm came back to Olivier with drawings. “Their idea was to make just one big countertop,” says Olivier. With a display area for their pastry at one end and a large work surface at the other, the mammoth countertop would form the focal point of the entire shop. 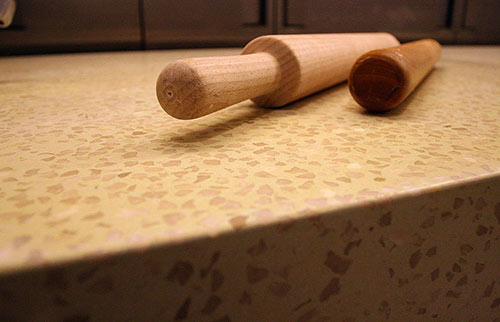 Making the design a reality
Steve Hoffman, an architect with W.I. Van Campen Architect, the Manhattan firm the Dessyns hired to handle things stateside, says he approached Remik for the project specifically because of the contractor’s reputation for GFRC work. “The clients’ design called for this very thick edge and curvilinear profile, which you would never be able to make up out of stone or synthetic stone,” Hoffman says. “Remik was chosen in particular because of his GFRC approach. GFRC could give us the appearance of massiveness, but really be thin and lightweight.”

Even though the design had been through two engineers and two architects, Remik worked with them to make some final changes to account for the particulars of doing the top in concrete. First off, he helped them adjust the design so the whole thing could come together in just three pieces. Next, they relocated the seams. “Since there are two levels of the countertop, we were able to put one of the seams where it changes height, so there’s only one seam visible,” says Remik.

When it came to the display cases and appliances that the countertop was designed to wrap around, there was literally no wiggle room. Olivier had pored over the designs in AutoCAD and had visited with Hoffman and Remik to make sure it could be executed accurately. “With all that the computer lets you do,” says Hoffman, “there’s an expectation that there’s a way to get perfect fabrication.” To get there, though, they ended up using an “old-school technique,” he says. Using the digital specs, Hoffman printed out a 1:1 template of the countertop’s shape, which Remik used as a basis for his forms. 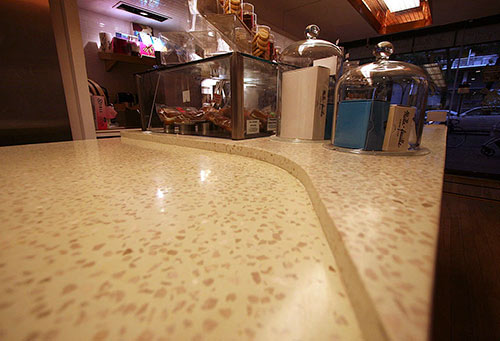 The finished product
Once Remik had worked out all of the design kinks, the fabrication process went off without a hitch. Remik polished the surface slowly, up to 400 grit, and was thrilled with the results. “I polished it so much I got a surface that was glass-like,” he says. “I’ve never reached such a nice and tight surface as I did with this piece. It felt like it was sealed already.” 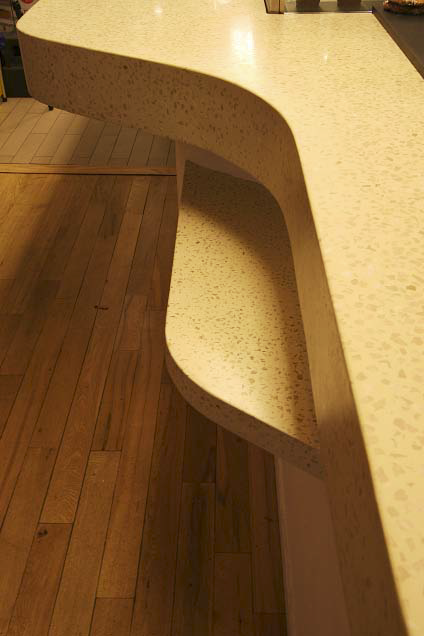 The installation was also straightforward, impressing Hoffman. “The lovely thing was that, with relative ease, it went right into place and there it was,” he says.

But it was only after the countertop was installed that its real test began. Because half of the counter serves as a work space for the bakers, the surface has to hold up to daily abuse. “We hit the countertop a lot,” Olivier says, with hands, dough and rolling pins. So far, though, the only damage sustained was on the day they decided to make lemon cake on the counter instead of on one of their stainless steel tables. “There was lemon juice sitting on the surface for several hours,” Remik says.

But even that was quickly undone. Remik refinished the area and reapplied the ICT reactive sealer, and the work space looks good as new.

In the end, despite all the challenges and complexities of the project, the countertop functions just the way Olivier envisioned. Every day, he and his staff work at one end to produce mouthwatering French pastry, all the while chatting with their customers on the other side of the counter. “It’s really just what I wanted it to be,” he says.

Scope of project: 40-inch-wide, 24-foot-long GFRC countertop for a French bakery and cafe in New York City. The counter serves two purposes, providing a display area for baked goods and a work surface for bakers. 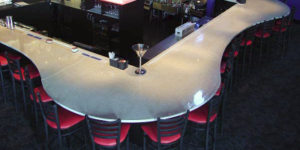 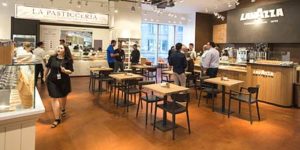