The new Exploration Center at the Monterey Bay National Marine Sanctuary in Santa Cruz, Calif., invites visitors to interact with exhibits that explore issues impacting the marine ecosystem. In fact, one of the first sights they see when they arrive is a subtly colored and textured entryway plaza featuring concrete poured in a swirling wave pattern and a life-size bronze sculpture of a humpback whale’s tail — something that gives young visitors a good idea of just how enormous sea creatures can be.

The man in charge of the entryway plaza’s decorative concrete installation, Dave Pettigrew of Santa Cruz-based Diamond D Concrete, says that of all the installations he’s completed in the past several decades, he holds this one particularly close to his heart. A native of Santa Cruz, he says he’s proud to be behind a new city landmark that will be enjoyed by future generations. 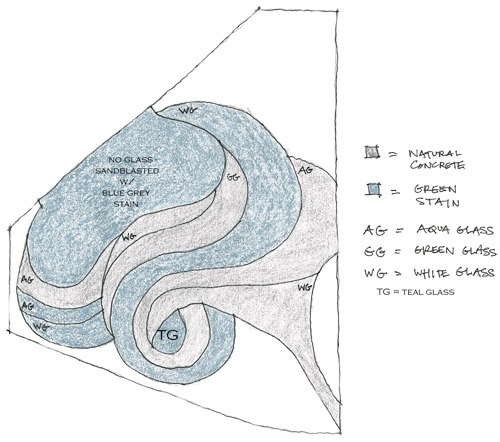 “This project is a huge focal point in the city of Santa Cruz and in our community,” Pettigrew says. “I told my daughters that their children and grandchildren will be coming to see this.”

Construction of the Exploration Center, a joint venture between the city of Santa Cruz, the NOAA (National Oceanic and Atmospheric Administration) Monterey Bay National Marine Sanctuary and the National Marine Sanctuary Foundation, began in 2010. The city of Santa Cruz commissioned Scott Constable and Ene Osteraas-Constable, artists who run Wowhaus, a Sebastopol, Calif., public art design and installation company, to create the look of the center’s entryway plaza. Having worked with Pettigrew in the past, the city invited Diamond D Concrete to install the decorative concrete portion and collaborate on the plaza’s design.

Wowhaus came up with the plaza’s surface design as well as the concept of the whale’s tail. For the plaza’s surface, they mapped out an oval-shaped section of swirling waves in vivid blues and greens. On one side of the oval, they incorporated a kidney bean-shaped faux pool of water. The faux water would serve as the backdrop out of which the cast-bronze whale’s tail sculpture would emerge.

“Our inspiration for the whale’s tail was the concept of charismatic megafauna — creatures that humans can connect with that are usually appealing and large,” Osteraas-Constable says. “We also thought a lot about children. We wanted them to be able to easily picture the whale and to evoke the scale of the ocean. We chose organic, curvaceous forms and oceanic colors for the concrete waves.” Making waves with concrete
Pettigrew dove into the faux-wave project by making samples. He came up with a plan to pour concrete, sandblast it, and apply stains in three or four bright shades of green and blue. But as he worked on the samples, he began experimenting with different ways of adding color and texture and realized the chosen stain colors were a bit too bright. So he decided to take a different route.
Instead of using stains, he would individually pour integrally colored concrete waves in alternating, more subtle shades of green and gray, then broadcast colored recycled glass onto each wave. In the kidney bean-shaped pool section, he’d pour concrete, then create indentations with texture mats and coarse rock salt, resulting in a look of water currents churning around the whale’s tail.

“I wanted to tone down the colors to match the building a little better,” Pettigrew says. “I used recycled glass, which was a big bonus for this project, and I chose several different colors of glass to give the surface movement.”

To set up his work, he drew a grid over the artists’ wave design drawing. (One quarter inch on paper equaled 1 foot on the base surface.) Then, he created a 10-square-foot grid on the surface using string, which served as a guide for outlining the larger-scale wave design. Pettigrew saw-cut the wave pattern into the surface and built wooden forms into which he would pour each individual wave.

To help sharply define each wave, Pettigrew first poured wave sections that did not touch one another. Once they dried, he poured the remainder of the wave sections, filling out the entire design. He used gray concrete supplied by Las Animas Concrete and tinted with Dry Integral Color in Slate from Solomon Colors Inc. for the kidney bean-shaped pool and several of the waves. He poured untinted gray concrete into the remaining sections. To further define the color of each wave, he broadcast recycled glass aggregate from Heritage Glass in teal, aqua, clear and green, using several color combinations. In the bean-shaped current pool, Pettigrew first stamped the concrete in a Fractured Slate pattern using L. M. Scofield’s Embossing Skin. Then, he broadcast coarse rock salt onto the freshly stamped concrete and tapped it into the surface using hand tools. The next day, he washed away the coarse rock salt, revealing various-sized pits and dimples.

He then planned to sandblast the concrete wave sections to expose the glass pieces, but several other contractors were busy working on their own projects for the exploration center and tended to walk through Pettigrew’s work area on a daily basis. So as not to expose the glass to heavy foot traffic, he held off on this next step for six weeks until the majority of the building’s construction was complete.

The tail end
The final touch on the oceanic plaza surface was installing the cast bronze whale’s tail, which Constable constructed in his studio. “It’s very nice and has no sharp edges on it so kids can play on it,” Pettigrew notes.

Pettigrew says he’s proud of the fact that he helped develop a notable work of public art in the heart of Santa Cruz and appreciates the education that the new exploration center will offer to visiting children.

“It’s a place kids can visit from school and learn about sea life, and there’s no admission charge, which is something I really applaud,” he says. “To have something there like a whale’s tail that is life-sized and can be touched gives kids perceptions of how big these animals are. It’s a really neat thing. I can’t wait to see those kids start lining up out front.”

For her part, Crystal Birns, city arts program manager for the city of Santa Cruz, describes the entryway plaza as a memorable, engaging space where visitors can gather together.

“It’s a dynamic, water-inspired concrete composition that evokes the motion of waves, and embedded recycled glass aggregate adds visual depth,” Birns says. “The whale’s tail invites visitors to sit, touch and explore. We were lucky to have Dave manage the concrete fabrication, as he is a skilled fabricator with an artist’s eye.”

Duration of project: A year and a half of planning and two months of labor