There are many types of “man caves,” from basements built for watching football to music-filled office spaces. The cave of Spokane, Wash., homeowner Doug Baker holds an antique pinball machine, a wall-mounted screen for projecting movies, and features crafted from glass-fiber reinforced concrete by decorative concrete designer, builder and artist Roch Fautch.

Fautch, owner of Magicraftsman Co. in Spokane Valley, met Baker when the retired vice president of Spokane-based Baker Construction & Development asked Fautch to help him pour exterior concrete at his home. The two hit it off, and in July 2011, after Baker completed a 6,000-square-foot home expansion, he made Fautch an offer of more work. Their still-in-progress project includes a number of concrete features inside the home, the centerpiece being a cast-in-place, carved, stamped GFRC staircase that resembles rock and leads into the basement-level man cave, graced by a sun-and-clouds water feature on the wall next to the staircase.

“I really just wanted to make it into a fun room, like a playroom,” Baker says of the man cave. 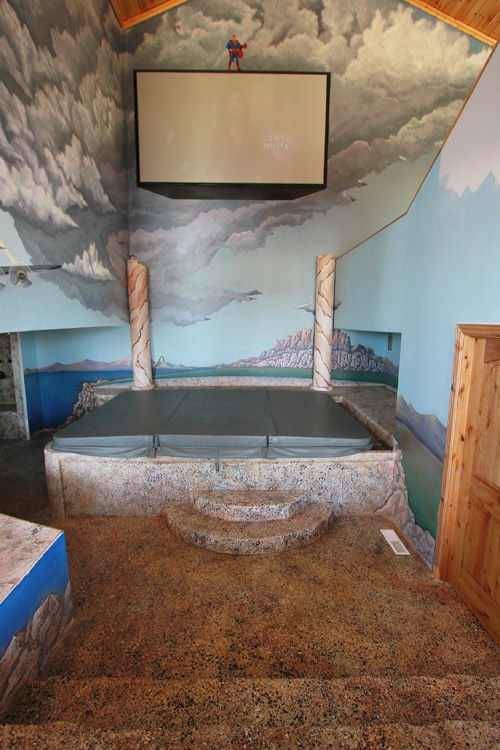 So far, Fautch has also installed several countertops and additional staircases, flooring, a deck, a steam room and a swim spa with removable parts — mostly using cast-in-place GFRC (some parts of the swim spa were cast off-site). Fautch painted murals of clouds and cartoon character images on the walls of the man cave, adding whimsy and nostalgia.

Fautch’s background reflects a blend of science and art. He studied engineering in school but says he always knew he’d be an artist. “The difference between the two is this: Engineers solve real problems, and artists create their own problems to solve.” 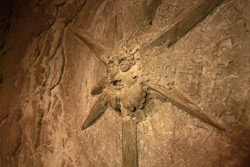 Fautch purposefully created “problems” throughout Baker’s property, dreaming up designs that would keep himself challenged. He says he and Baker collaborated extensively on the project. “Working together, we came up with things I couldn’t have come up with on my own.”

The artist, engineer and self-described “mad scientist,” who has 30 years of experience as a concrete finisher in residential and commercial markets, says knowing concrete inside and out has allowed him to enhance his artistic abilities and develop unique skills in the decorative concrete realm. For instance, he builds his own fiberglass concrete molds and has spent 15 years perfecting his own GFRC mixes.

“My experience has given me a better understanding of concrete,” he says. “It allows me to do things with a hawk and trowel that I haven’t seen anyone else do.”

Sculpting concrete into intricate designs is one of Fautch’s signature skills. A recent notable work of his (that isn’t part of the man cave) is a 7-foot-tall sculpted concrete dragon, which he carved using a palette knife handed down to him by his cartoonist grandfather, he says.

Fautch’s carving technique, which he employed while working on Doug’s staircase and wall water feature, involves adding new layers of GFRC, each one within 48 hours of the last, and carving while the material is still wet.

Each layer builds on the last, and because he does not allow the material to cure in between layers, the multiple layers act as one strong, durable application of GFRC and won’t delaminate, he explains. “Once you’ve waited 14 to 28 days, the last layer of concrete you’ve added will be cured. Then, the next layer will act as a separate application, and that’s not what you want. The biggest concern associated with waiting to add new layers is delamination and having it come apart. This way, the material grows together.” 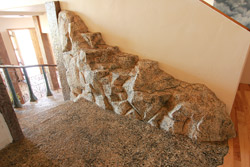 For the staircase railing, he anchored 1-inch, square-shaped steel rods to the floor vertically, then installed PVC pipe — heated, then bent — to create the top rail. He used PEX tubing to build the snakelike downward-curving end of the top rail, and he wrapped everything with a GFRC mix that contained 2-inch-long fibers, which are significantly longer than the typically used 3/4-inch fibers, to add strength. Long fibers tend to cause clumping in GFRC mixes, so Fautch says he mixed this concoction by hand to ensure a smooth result.

“The railing is amazing — you can put your whole weight on it, and it won’t budge,” he boasts.

Fautch added texture to every concrete surface besides the countertops with homemade stamps made from rocks native to the property. He simply picked out pieces of granite from Baker’s front yard, cleaned them, sprayed them with polyvinyl alcohol, spread urethane rubber on them and peeled the cured urethane rubber off to create the stamps. He used diluted acrylic paint to color every GFRC surface he installed, applying it as he would a stain. 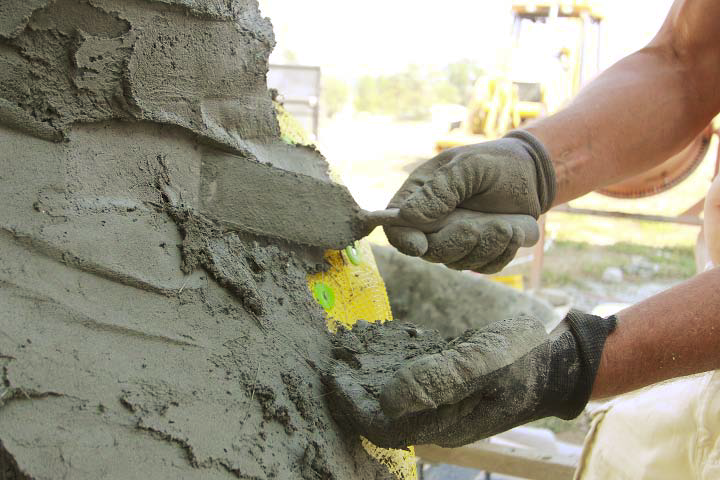 Over the next couple of years, Fautch will be expanding on his man-cave mural artwork, which currently includes images that help transport Baker and his wife back to their younger days, such as a Superman and a Flintstones scene. He also plans to add two balconies (one is currently in progress), outdoor water features, and possibly even a reproduction of a Renaissance statue in the front yard.

“It’s been a lot of fun working with Roch,” Baker says. “He’s very innovative — and a typical artist. He’ll come up and work all night long just to come up with a drawing, and he does some crazy stuff. He can make concrete into anything, and it doesn’t crack. You won’t see a single fracture.”

For his part, Fautch says he had free rein to create as he pleased at Baker’s home. “Doug gave me complete artistic freedom to do what I wanted,” he says. “The reason why I’ve been an artist my whole life and attracted to concrete is because I thrive on challenges. If something doesn’t challenge me, I’ll invent something that will. And it’s exciting when someone gives you their space and says, ‘Go for it.’”

Scope of project: A cast-in-place GFRC staircase and carved concrete water wall feature inside a basement-level “man cave,” plus GFRC countertops, staircases, a deck, a swim spa, a sauna and flooring

Duration of project: About one year. Fautch continues to add finishing touches to the home. 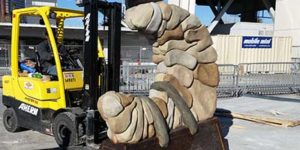 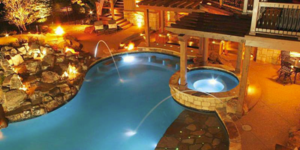 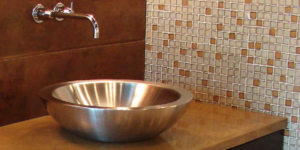