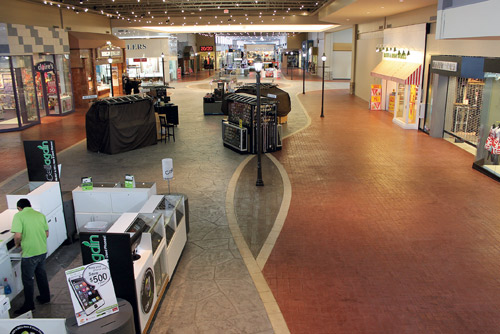 Last fall, Architectural Concrete and Design Inc., a family-owned company in Draper, Utah, was tasked with retrofitting the concourse of nearby Valley Fair Mall with a stampable overlay system. The specifications dictated that the selected concrete system was to be installed over existing ceramic tile without any demolition.

Why over the tile? Because tearing it out would have cost more and the job would have been messier. The mall was to be open as usual throughout the renovation and the owners didn’t want the hassle of ripping up anything. 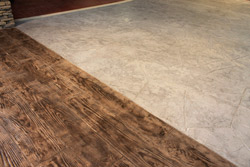 The clincher was that the work performed on the expansive 70,000-to-80,000-square-foot concourse could not be done during normal working hours or block daily access to any store in the mall.

As one of the first 10 Bomanite franchises in the nation — it began representing Bomanite in Utah in 1978 — Architectural Concrete and Design had over the years installed a wide variety of hardscapes for commercial, residential and municipal projects, but it had never tackled the interior of a mall. So Devin Johnson, the company’s vice president of technical sales and marketing, turned to Bomanite’s expertise for guidance.

Terry Grimbal, director of technical services for Bomanite, was key to the project’s success, as was technical input from Chris Sullivan with ChemSystems Inc., says Johnson. “Grimbal traveled to Utah and spent about a week with us, helping us develop the Thin-Set II system and get it down pat.”

Although Johnson says he’s used the Thin-Set II system multiple times over various substrates, he had never before used it over existing tile.

The Bomanite product, a specially formulated polymer-modified topping mix that can be imprinted, will bond to any stable, structurally sound substrate. It typically is installed 3/8-inch thick and can be feathered to a zero edge. Billed as an extremely effective alternative to demolishing an existing substrate, Thin-Set also can be exposed to traffic quickly — which was a priority for this job. 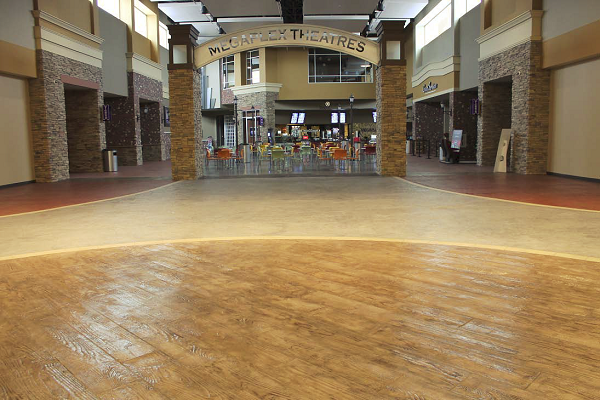 A patterned upgrade
Valley Fair Mall first opened for business in 1970. Like many of its ’70s counterparts, the mall featured a concourse outfitted with now-outdated colored tiles. The new design called for a variety of concrete stamp patterns, colors and streetlights that would transform the mundane walkway into an interesting, winding streetscape.

Throughout the concourse, a basket-weave brick pattern integrally colored with Bomanite Brick Red and a random slate pattern in Shale Gray covers much of the way. For visual breaks, an 8-inch slate border in Sand is straight in places and free-flowing in others. For even more variety, a 12-inch wood-plank boardwalk pattern in Sonora Tan graces the mall’s roundabout and accents selected areas.

The work was scheduled to be completed in two phases, with the first phase beginning in September 2012, continuing until the first part of November and then breaking for the holidays, and the whole job wrapping in February.

Working each evening in increments of between 1,000 and 3,000 square feet, the Architectural Concrete and Design crew bead-blasted sections of the floor to profile it, using a machine equipped with a vacuum to contain the dust and residual mess. They then laid down a Bomanite epoxy primer and silica sand to create a mechanical bond for the overlay. The next day, after that coat dried, the crew applied a “scratch coat” of Thin-Set II (with lines scratched on its surface to improve bonding), then a 3/8-inch-thick layer of Thin-Set II, stamping it with one of four Bomanite patterns. Johnson estimates they stamped roughly 1,000 to 2,000 square feet per night. 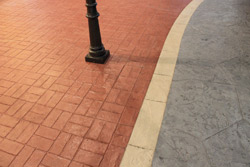 Because the mall remained open for business during this whole process, the team had to work at night, from 9 p.m. to 7 a.m., Johnson explains. Then, from 7 a.m. until 8:30 a.m. each day, they laid down a 10-foot swatch of breathable landscape fabric at affected stores’ entrances and roped off everything else they had stamped that night. In addition to the possibility of wet concrete, the terrazzo strips the crew used for their formwork were potential trip hazards.

“We had to control traffic by channeling shoppers into each store over a covered pathway that was dry enough to walk on. And that was quite a challenge,” he says. “We had to time it so what we stamped the night before (at the stores’ entrances) had time to dry and could withstand foot traffic. Some mornings we were right on the bubble, as the product was almost too wet to walk on.”

Overall, Johnson says, the Bomanite overlay system went down as planned, allowing mall owners to avoid a messy and more costly demolition route. “All the patterns, colors and designs came together within the time frame allowed. The (almost-finished) product is well above the mall’s expectations.”

Scope of Project: Without involving demolition, cover the existing tile in the mall’s 70,000-to-80,000-square-foot concourse with a stampable overlay.