There’s the “bump and pass” thrills that have long galvanized fans who flock to the track’s spring and late-summer NASCAR Sprint Cup showdowns.

“It’s called being ‘Bristolized,’” Stephen Swift, an official with Bristol Speedway owner Speedway Motorsports Inc., says of the sometimes hair-raising brand of racing that has long been a Bristol trademark.

But Bristol hit a bump in the road back in 2007, when a major reconstruction of the concrete track changed the way drivers attacked the course.

In the 2007 project, the choice was made to go with “progressive” banking, an emerging development on stock-car racetracks at the time. This re-engineering left the track with a higher degree of banking at the top (nearly 30 degrees) than at the bottom (24 degrees). The redesign was built for speed, but drivers, fans and speedway officials also noticed a change in the old Bristol tradition of thrills, spills and daring maneuvers.

Bringing the thunder back
Bristol Speedway is a NASCAR short-track venue that can hold up to 165,000, making it the nation’s fourth-largest sports venue, according to published information. Speeds don’t hit the pace seen in most NASCAR oval tracks, but the short track and steep banking generate a good deal of congestion and contact.

Matching the rocking and rolling on the track is Bristol’s decibel level — the site is sometimes called “Thunder Valley.”

But Speedway Motorsports noticed a change after the 2007 track rehab, as faster but tamer races throttled fan excitement.

“When we reconstructed the track, we were trying to get a side-by-side, faster track,” Swift says. “We achieved this better than we expected, with three cars wide with no problems. There was no need to bump or push (other cars) out of the way for position.”

Bruton Smith, Speedway Motorsports chairman, “was determined to make a change to the surface” to bring back some of that old-time Bristol mayhem, Swift says. After the spring 2012 Sprint Cup race, Bristol’s engineering team “instantly went into brainstorming mode to determine what our options were prior to the August race.” (Bristol hosts two major Sprint Cup events — the Food City 500 in March and the Irwin Tools Night Race in August.)

After talking with a number of industry people, the decision was made to lessen the slope of the upper groove. This would slow down the outside lane and force drivers to compete more aggressively in the turns, he says. 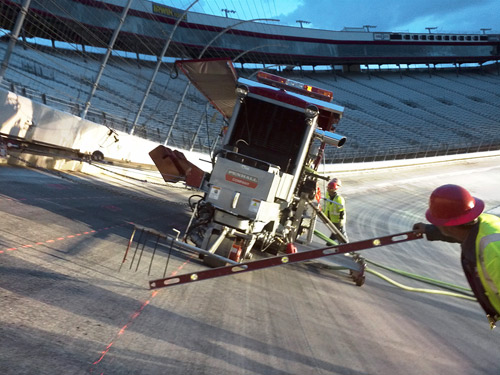 The company made some adjustments to its G-38 diamond grinder to facilitate removal of up to 1 1/2 inches of depth in the upper lane of the banked track, in the corners. The machine, built by Penhall Co., employs a barrel-type grinding head equipped with 220 12-inch diamond grinding blades mounted on a 38-inch shaft. The grinding head turns as the machine inches forward, and the spinning diamond blades cut into the concrete.

The job required precision and safety precautions, with the machine operator actually manning the controls while walking outside the grinder, to protect against the threat of injury on the steep banks.

“The biggest challenge for the work was that the slope was as steep as 30 degrees,” Neal says. “That’s difficult to walk on, much less put a 25,000-pound piece of equipment on.”

The grinding task called for the machine to make four passes, each 3 feet wide, along the 12-foot-wide outer lane of the track’s corners, which total 1,500 linear feet. Major challenges in accomplishing the task included mechanical operation — lubrication and fluid flow to all machine parts — and stability, which was ensured with a rolling restraint system.

With tolerances for error narrow, the job was a grind in more than one sense and required several weeks to complete, with the Penhall Co. crew working six days a week, 12 hours a day to meet a tight deadline. The work started in April and was finished in time for a tire test of the surface in June.

“We were learning on the job,” Neal says. “To date, this type of operation had not been attempted or executed. We’ve done jobs on high-bank tracks, but not on that steep of a slope. It was a tough job.” 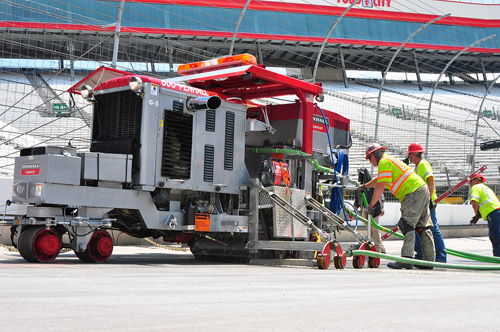 After Penhall Co. had removed some 80 tons of concrete with the grinding work, another contractor smoothed out the abraded surface — described by Neal as a “corduroy” texture — with a rotary diamond grinder mounted on a Bobcat. The company, Freeburn Track Repair, headed by Charles Freeburn, “did a tremendous job and has for years,” Swift says. “He mostly works on drag strips and has worked in about every state in the U.S. and outside of the U.S. Great contractor.”

Swift says a return to the old Bristol excitement was clearly evident at the August 2012 Irwin Tools Night Race.

“The fans, owners, competitors and officials were ecstatic with the outcome of the grinding,” Swift says. “With the modifications, the race was more like the old-style racing at BMS.

“This was a huge difference from the previous four years on the new surface. Bristol coined the phrase ‘racing the way it ought to be,’ and with the improvements we were back to this status. The modifications created the notorious bump-for-position racing that BMS was known for.” 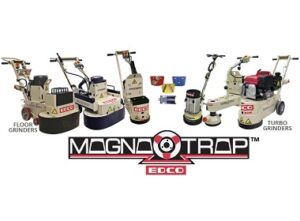 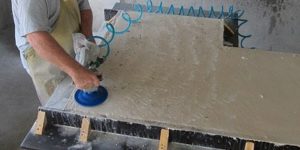 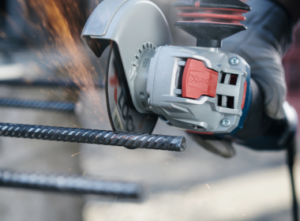