Choosing the right mixer for casting countertops, sinks and the like is an important element of getting the results you want. The mixer must deliver a workable and consistent mix, in the quantity you need, at a speed that allows you to work profitably.

We talked to four experts about the issues and the choices, and found general agreement about the big questions but some interesting differences in the details. They all began by saying that the mixer you need depends on the type of concrete you’re casting. Mixers that work excellently with one type of material may not deliver a workable result with another.

Jeffrey Girard, P.E., president and founder of The Concrete Countertop Institute, was emphatic that using the right mixer for the job is integral to getting good results. “A lot of the problems that people have in this field occur because they cheap out, do it the wrong way and then have callbacks. That is what kills your profitability. There cannot be any compromises in the process.” And if the price of the equipment seems high, he points out that “buying a brand new mixer is dirt-cheap compared to setting up most businesses.”

For a conventional sand-and-gravel mix — sometimes referred to as a wet-cast mix — a drum-style mixer is considered the best choice. It’s also one of the most economical, and very easy to find. A drum mixer consists of a rotating drum or barrel with blades fixed to the inside, basically a personal-sized version of the familiar ready-mix truck.

“Barrel mixers rely on the material folding through itself to mix properly,” explains Mark Celebuski, partner at Trinic LLC.

Mike Heidebrink, co-president of Cheng Concrete, notes that a barrel mixer operates with the drum tipped on its side, so the concrete is falling in on itself. “The aggregate needs to be kept in suspension, and that’s what drum mixing does,” he says. Not only does the drum mixer prevent the coarse aggregate from collecting at the bottom, it also requires coarse aggregate to enhance mixing action. The rocks act as little mixing blades, helping blend the sand, water and cement.

Girard agrees that a barrel mixer can work well for wet-cast — if you load the mixer properly. “Add liquid up front, cement last. The wrong way is to put all dry ingredients in, dry-blend them, then add water. It will form stiff clumps and never mix properly.”

He recommends first mixing the water and all dry materials except the cement, and blending very uniformly. You can take as much time as you need, because the clock doesn’t start ticking until you introduce the cement. Then, he says, “add cement gradually, so it mixes easily and efficiently without hassles or problems.”

Our fourth expert, Jeremy French of Blue Concrete, not only agreed, but felt drum mixers are “especially good” for wet-cast.

Drum mixers come in a wide range of sizes. It’s important to remember that the size rating refers to the total capacity of the barrel, and you would never actually try to mix that much at once. (This is true of all mixer types.) Girard suggests mixing about a third of the rated capacity. Celebuski recommends mixing half the rated capacity or less. “For a 10-cubic-foot rating, mix 3-5 cubic feet.” He also cautions not to try to mix too little in a barrel mixer, because the material will roll around without folding.

Sand mixes don’t work as well in a drum-type mixer because they lack the coarse aggregate to help the dispersing action. Since a sand mix is basically similar to mortar (cement, sand and water) it stands to reason that a mortar mixer might be a good choice, and our experts concurred on that.

A mortar mixer is usually a horizontal trough, with a horizontal shaft bearing mixing blades that turns inside it. The blades or paddles constantly sweep the mix up out of the bottom of the trough and fold it over itself. They typically have a rated capacity of about 7 cubic feet and are usually tow-behind devices. They’re often seen at the job sites of masonry or stucco projects.

Girard says that a mortar mixer is also useful for wet-cast mixes. “For people who want to do both kinds of mixes, my only recommendation is a mortar mixer. And I recommend an electric mixer. They’re a tiny bit more expensive, but they have no fumes.” Heidebrink felt the opposite, that mortar mixers “are not good for large-aggregate mixes.”

Everyone agreed that glass-fiber reinforced concrete (GFRC) (and its near-cousins using other fibers) is a very different material that requires high shear in mixing to produce a consistent and workable result.

Girard explains that GFRC materials were designed to meet the needs of large-scale precast plants. The ideal mixers for them are “very large, very impressive, very expensive” high-shear mixers.

“Conservatively speaking, 90 percent of concrete countertop people can’t afford them. Instead, they use a drill, or a handheld mixer, that spins a 5- or 6-inch diameter blade at about 500-800 rpm. They’re marketed for mixing paint or thin-set. These work.”

You typically use this type of mixer in a 5-gallon bucket. It may have one or two blades. Heidebrink feels two is better.

The drill-and-bucket method can be arranged on a production basis, Celebuski points out. You just need a lot of buckets. He measures all the dry materials except the fiber into all of the buckets. He then pre-measures the water and fiber for each bucket. “Then one guy starts mixing and the other guy pours.”

However, Girard points out that there are, “big downsides” to the hand-held option. “You can only make a small amount of concrete at once. The most I’ve been able to make efficiently is about 80 pounds at a time. (And) it is killer on the person mixing. It’s very fatiguing. At the end of the day, your back is done. From an efficiency standpoint, that’s a downside.”

French concurs. “It’s what many guys use for GFRC, and it’s an absolute time drain. Your motto should be, ‘What equipment can I get to reduce the labor?” Because labor is almost the entire cost in making countertops.”

If your shop produces enough volume to support it, a stand-alone high-shear mixer seems well worth the investment. Described as being like an oversized milkshake machine, a high-shear mixer runs at very high speed and produces a very consistent, well-mixed batch very quickly. 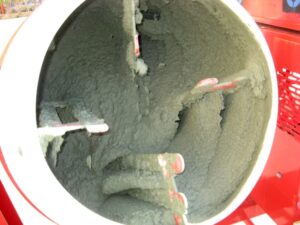 “If you’re running a GFRC pump rig,” suggests French, “this is the mixer you need to use. It mixes in the fiber better than any other type. In order for the mix to go through a pump, you need to mix the glass very well. If you leave it in there too long, however, it will shred the glass fiber.”

Surprisingly, everyone agreed that a vertical-shaft or pan mixer was a great choice for GFRC. Several mentioned the Imer Mortarman 360 specifically in terms of performance and size. Although it does not produce as fast as a big, high-shear mixer, the entire panel deemed the result with this type of mixer as  more than adequate. One typically costs about $5,000 to $6,000.

Girard also mentioned a specialized GFRC mixer made by RimCraft Technologies Inc. This product, the GFRC Mini Mixer, is not on the company’s website, but it is a high-shear mixer with two speeds and a claimed 150-pound batch capacity.

Looking for the right mixer? 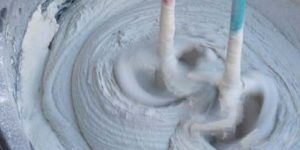 Picking the Right Mixer and Paddle for Concrete 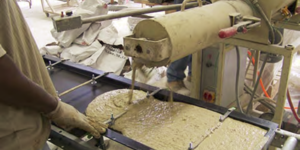 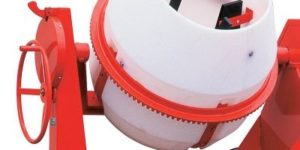 Which Portable Concrete Mixer is Right for You?