As J.C. Penney Co. continues to try to regain its foothold in the market after ousting CEO Ron Johnson, industry experts contend the company isn’t likely to toss out all of Johnson’s ideas. “I think Ron’s concept was right,” says Scott Metzger, vice president of Metzger/McGuire, a company involved in Penney’s recent renovation efforts. “He just tried to do things too fast perhaps.”

That said, interim CEO Mike Ullman forged ahead with the “shop-within-a-shop” concept as Wave 3 of the stores’ remodeling makeover took place this spring in JCPenney stores across the country. Polished concrete is still part of the plan … at least for now.

500 Stores
When JCPenney announced Wave 3 of the national remodeling program was about to begin, nearly 700 stores were reportedly out to bid. But in the end, that list was whittled down to about 500 stores, according to a company press release.

Unlike with Wave 1, there was no hard start this time, says Metzger, whose company supplies the joint and small-crack repair filler for the renovations. Most construction began sometime in February and was supposed to end April 15, he adds, but his company was still selling materials in early May.

“This wave didn’t kick off as quickly as the last one so there wasn’t as much scrambling (for materials),” says Bobby Watson, national sales and training manager for AmeriPolish.

AmeriPolish and Prosoco supplied the densifier, stain guard, dye and stain for all three waves. For this wave, Prosoco also supplied RealCrete PC, a new repair and patching product the company introduced at 2013 World of Concrete. Rapid Set TRU from CTS Cement Manufacturing Corp. was the other approved wide-surface repair product.

“Waves 1 and 2 put a stop to a lot of work elsewhere because contractors were floating jobs back and forth. This wave was more strategized,” says Tabitha McCarter, vice president of operations for Yarbrough Concrete Polishing, in Knoxville, Tenn. “The first wave was fast and furious but this one was a little more planned. Contractors had a heads up as to when it was going to start.”

“I thought this wave went much more smoothly than the first two,” says Doug Wright, general manager of Rite-Way Concrete Seal Systems Inc., in Wolcott, Ind. “JCPenney had a better understanding of the polishing process and their expectations were more realistic than before.”

Although many contend there was technically an approved list of contractors based on the previous one, it wasn’t followed very well. “JCPenney gave the general contractors the freedom to move away from the list at their own discretion,” says Watson.

This meant more companies were bidding on projects and bidding wars ensued. Consequently, many in the industry believe, the quality of some work suffered when less experienced companies won bids with very lowball figures but were ill-equipped to handle the rigors of polishing.

Also, unlike previous waves in which contractors were overhauling carpeted areas and removing layer upon layer of glue, this time they were removing old aisles. Slabs were jackhammered to death to remove ceramic tile and, in the process, big chunks of concrete. “Many of the (future) streets were in such bad condition they had to be overlaid,” says Watson.

One store in West Town Mall in Knoxville was so badly damaged after the tile removal, McCarter says, she had to pour a brand-new floor. “Whoever put tile in there wanted it to be permanent,” she says.

The "Streets"
In Wave 3, about 500 JCPenney home departments were renovated with updated lighting, fixtures and flooring to differentiate the “shops” that feature specific brand names. Unlike in Waves 1 and 2, the new shops’ floors don’t feature concrete but rather coverings such as carpet and laminate.

And, of course, there are the new streets. Designed to make the shopping experience more enjoyable, the streets’ primary aisles range between 12 and 14 feet wide, with side aisles about 10 feet wide. Total footage of the streets in each store’s home décor section range from as small as 3,500 square feet up to 12,000, with most averaging between 7,000 and 10,000 square feet.

This made for a big change in the layout of each store. In the three stores Wright worked on in Wave 3, the street pattern layout was “completely different from” the previous aisle pattern, he says.

Several contractors reported the streets they worked on kept changing in the middle of the job. “Just when we thought we were done, they added more square footage to the job,” says McCarter.

Impact on the Polishing Industry
Unlike Walmart and other retailers that have chosen to use polished concrete floors throughout a store, JCPenney is the first major retailer using polished concrete to define areas. “In the Penney’s scenario, polished concrete becomes the enhancement.” says Metzger. “Most other retailers look at polished concrete’s lower maintenance cost while JCP is looking at it as being more aesthetically pleasing than alternate flooring systems. They are definitely believers of using concrete as a decorative element instead of a wear element. And that changes the rules.”

Watson of AmeriPolish agrees that JCP’s decision to go with concrete for its aesthetics rather than its cost has opened up a door for the polishing industry. “Hopefully, Penney’s choice will influence other retailers and make them realize it’s not just for grocery stores and super-centers,” he says.

Wright says he can’t speak for national retailers but he thinks the work has made an impact in his area. “We’ve had a number of local businesses tell us they’d like something similar to the floors at Penney’s,” he says. “(JCP) managers have told us people are asking about the floors. Customers want to know who installed the floor and what process was performed.”

He also notes the floors are a great reference tool because potential customers can conveniently see polished floors in action whenever the stores are open.

Work Environment
Just like the previous waves, the work in Wave 3 was done at night so the stores could remain open during regular business hours.

“It took a lot more coordination from the applicator to complete the work in one night or, at the very least, make it suitable for foot traffic the next day,” says Joe Reardon, concrete product group specialist for Prosoco.

Several things contributed to making the work harder to complete in a timely fashion. Barricades that blocked off the work area had to be put up and taken down each day. Cables had to be run and equipment set up and lugged out each night to store elsewhere on the premises. And in some instances, because of the location, subcontractors couldn’t use their generators and had to rely on house power, which limited the number of machines they could run at any one time.

On top of these constraints, “There weren’t enough working hours in an evening’s time frame to apply the color and stain guard in one evening to finish a particular section,” says McCarter. “In some cases, it was taking us twice as long as we projected.”

As to pay, having learned from the first wave, several contractors asked for operating money upfront. “And many got it, from what they tell me,” Watson says. “At least enough to cover their bills.”

Plans For the Future
The decorative concrete makeovers seem set to continue despite JCPenney’s recent change at the top. “The interim CEO was impressed with what he saw at the prototype store in Texas but there hasn’t been any word if the work on the streets will continue,” Watson says. “But he’ll have to make a decision as to continue polishing the streets or go back and retile. They can’t leave them the way they are. I think they’re going to step back, recoup some money and decide which way they want to go.”

Some polishing contractors on JCPenney’s approved list who didn’t pick up any work in the previous waves landed contracts in this surge.

“The first wave was a massive rollout creating chaos abroad,” says Ryan Klacking, president of Michigan Maintenance Solutions, in Dearborn, Mich., who doesn’t regret not winning any bids in Waves 1 or 2. “Everything was revealed at the last minute. There was no real prep time.”

This time around, however, he was able to walk several stores and understand the client’s expectations before accepting the job. “Several stores had to be reworked after they were completed last time,” he says, and he wanted to avoid those pitfalls.

In Wave 3, Michigan Maintenance was responsible for demolition, repair and polishing in three Michigan stores. All of the areas involved had been covered with ceramic tile which had bonded well — make that too well — with the underlying concrete slab. Consequently, “Demolition was tough and slab repairs were extensive,” Klacking says. “Polishing was a small piece of the project in comparison.”

Klacking concedes that some polishing contractors were hired for this wave that had no business attempting the work. “Several companies were thrown off jobs because they could not meet the schedule and expectations. We were called to take over several projects. In some cases, we were able to get the companies on the right track, but on others extreme rework had to be done.”

Overall, he says, “I think the extensive amount of repairs required to meet JCP’s expectations will strengthen the industry” and keep expectations high when it comes to polished concrete.

Controversy Motivates Many to Pass on Wave 3

If you didn’t catch the last wave of J.C. Penney Co.’s ongoing renovation, you’re not alone. Plenty of contractors decided to sit this one out.

First, there was so much negative publicity about JCPenney’s financial status. Many polishing contractors turned down work because they were unsure of the company’s stability and whether it would be around long enough to pay them.

Next, most cited at least one of two reasons. One, they were put off by the piddly amount many general contractors wanted to pay per square foot to repair and polish aisles during this wave when constructing the “streets.” Two, they were concerned about how long it took to get paid for Waves 1 and 2, which encompassed polishing areas for the Levi’s, The Original Arizona Jean Co. and Izod shops. Some subcontractors reportedly had to wait 120 days or more to get paid.

“We attempted to participate (in Wave 3) but the general contractor wanted us to come down to $4.50 a square foot and we weren’t willing to do that,” says Sam Godbey, director of operations in the decorative concrete division of Artistic Surfaces, in Pompano Beach, Fla. “It’s too hard to travel on that kind of money when I have to pay my guys a per diem (on top of wages).” In Waves 1 and 2, Artistic Surfaces was subcontracted to do seven stores in Florida and South Carolina and later hired to repair two others.

Tommy Clay, general manager/owner of Ardor Solutions, in Oklahoma City, Okla., and Charleston, S.C., says his company, which had done eight stores in the previous waves, also declined the work. “There was a risk there without fair compensation for that risk,” he says. “We had bid work at a price based on the scope given to us and were unwilling to quote a polish-only price plus change orders after the fact.”

Besides that, he adds, for Waves 1 and 2, the promised net payment in 15 days stretched into more like 45-60 days. “And that was frustrating,” Clay says.

As it turns out, JCPenney secured a $2.25 billion loan this spring from its investors to pay for capital expenditures, day-to-day operations and some of its debt. As a result of that, people are getting paid for this wave in a timely manner.

“So that’s one highlight,” says Joe Reardon, concrete product group specialist for Prosoco. “Everyone I know has received their checks so far. They just don’t know if they’ll get any more work from them any time soon.” 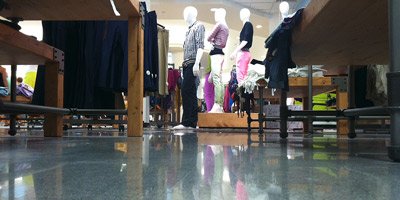