Metallic Epoxies Glitter on the Floor at a Contemporary Show House

The unabashedly modernist home in the River’s End community, in Eagle, Idaho, near Boise, is called a “stunning glass jewel box” in an Idaho builders association’s 2013 Parade of Homes description.

The dark-hued, glistening floors could certainly be described as gemlike. Hitting pay dirt with this flooring creation was Silverline Systems, a Boise decorative concrete company with specialties that include coatings, overlays and stain-and-seals. The company used a metallic epoxy flooring system — Liquid Dazzle, from Westcoat Specialty Coating Systems — to deliver stunning visuals throughout the custom-built home.

The home, called the “The Manhattan,” was designed with concrete floors and radiant heating on both levels, and the epoxy metallic flooring was installed on all 5,200 square feet — great room, bedrooms, kitchen, bathrooms, even the stairs and closets. 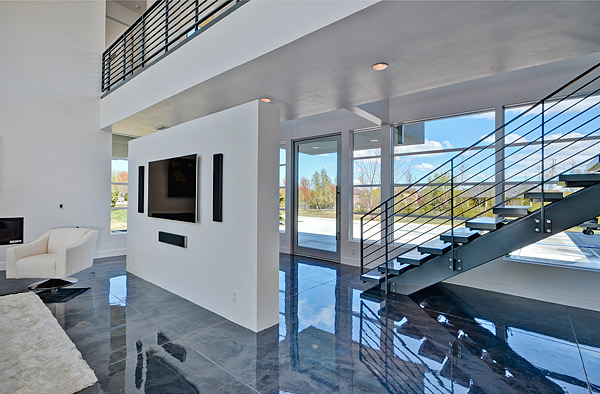 “We wanted more depth, movement,” says Tyler Hess, president and CEO of Silverline Systems. “Polishing would be more uniform in appearance.” And it would produce an earth-tone color, rather than a glamorous shade more suited to this contemporary abode.

Hess was hit with a sudden bolt of inspiration: He had recently seen a decorative epoxy flooring material that could well be an ideal match for the design theme of the Eagle home.

Silverline Systems prepared a small-scale version of the Liquid Dazzle floor — about 200 square feet — at its Boise showroom, Hess says. “As soon as I saw it, I knew it was the floor they had imagined,” he says, referring to the owners and interior designer Reed-Engelhardt.

Designer Reed-Engelhardt calls the result spectacular. “The floor sets off the house in the most amazing way.” 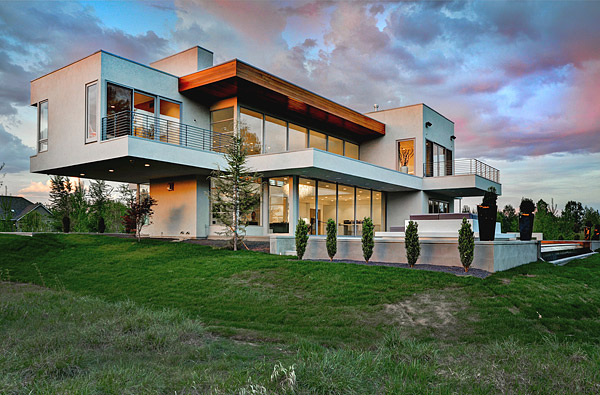 In a write-up for the Building Contractors Association of Southwestern Idaho, the home is described as having a “modern, moody and exceptionally chic” design of a type that might be encountered in New York City rather than Boise. Located near the South Channel of the Boise River, the home “blurs the lines between indoors and outdoors.” It features white lacquer cabinetry, stainless steel architectural elements, sundecks, and terraces that “take full advantage of pool, river and mountain views.”

Tradewinds owner Steve Martinez says getting the homeowners association in the River’s End community to approve the home’s modernist design presented a real challenge for the architects and builder. “For this area, you would have a better chance of seeing a UFO than getting this approved,” he says, adding that a conditional use permit was required. Homes in the area are generally a more typical prairie or ranch style, he says.

“You could put it (the home) in Malibu all day long, but for Idaho it’s out there,” Martinez says.

The home may push the design envelope in Boise, but the Building Contractors Association liked what it saw — the house earned a spot on the association’s Spring 2013 Parade of Homes, a showcase of new dwellings recognized for top-notch floor plans, designs and attention to detail.

The concrete floors feature radiant heating. Martinez says the builder and subcontractor trades must ensure they are in sync when radiant heating systems are part of the package. “You have to be dead-on with anything you’re doing on the concrete,” he says, as any damage to the system’s water lines or wire mesh would present major repair headaches. “Everything has to be precise, and you can’t move a wall or add a plumbing line,” Martinez says.

He adds that Tradewinds takes photos of the construction process as part of a process to carefully record installation of the radiant-heat system. The photos can act as a guide to where subsequent saw cuts can be made or other issues may arise where cutting into the floor is needed. 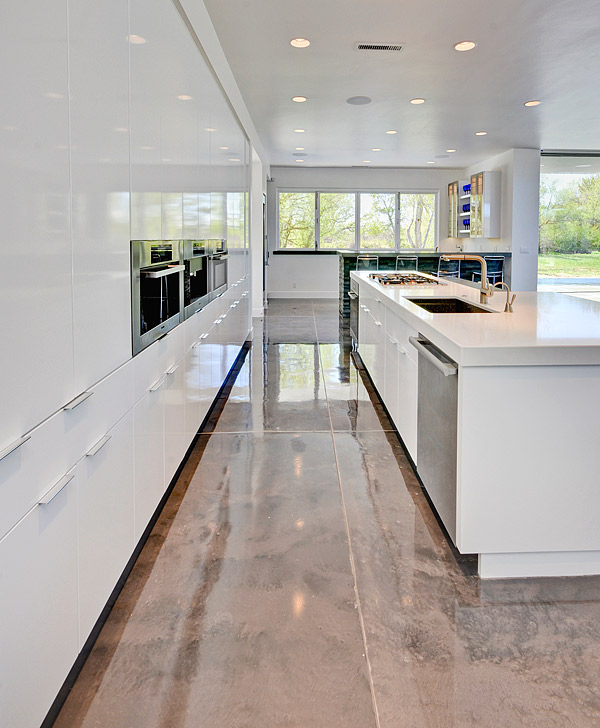 Application art and science
Silverline Systems employed a combination of etching with muriatic acid and spot grinding to prep the concrete surface for application of the Liquid Dazzle floor. The crew used an HTC 500 grinder with 40-grit diamonds in areas where the surface was not opened up adequately for optimal adhesion. Hess says the crew looked for spots where the cream coat on the concrete surface remained visible, and they ground the surface to increase the exposure of aggregate as a salt-and-pepper look.

Caution was required in grinding, however, in recognition of the presence of the radiant-heating system. “You want to be careful because some of those coils could be near the surface,” Hess says. “You need to take it slow, and examine the surface ahead of time.”

A good deal of masking was required, as the selection and installation of the liquid flooring system occurred late in the construction process and other finishes were in place, including paint.

Installation of the flooring system began with roller application of a basecoat, using Westcoat’s EC-12 epoxy primer, tinted in Stone Gray to work with the finish coat. Following a 24-hour dry, the Liquid Dazzle was trowel-applied at a high-build thickness of approximately 3/8 inch. A notched trowel is used to spread the epoxy, and a loop roller is employed immediately after trowel application to enhance the visual effects of the finish. Backrolling in this fashion with the loop roller works to enhance distribution of the metallic content and “helps create that movement,” Hess says.

A final step with the epoxy system is rolling with a porcupine roller to remove any bubbles that may develop. Silverline Systems also added its own twist with a light spray of acetone, which Hess says amps up the dynamics of the metallic finish. “We tried this with our own showroom floor and really liked it,” he says.

In addition to the floors on both the first and second levels, Silverline Systems installed the epoxy metallic system to the home’s concrete stairs, a process Hess called ‘tricky.” The steps were suspended on a metal structural framework — without risers — and constructed with cast-in-place concrete. The crew used duct tape to create a lip on the edges of the steps to facilitate application of the high-build epoxy.

Color and effect
Mardie Reed-Engelhardt, the interior designer, calls Liquid Dazzle “a great fit for the project.” Reed, initially skeptical about the dark color and perceived slipperiness of the high-gloss surface, was quickly won over after seeing the installation get underway.

And concerns about slip proved to be unfounded, she found out.

“We walked on it, and found that it gets enough grit from use to where you don’t slip.”

Most challenging aspect: Effective execution of application methods, including use of spikes on shoes, loop rolling, porcupine rolling and acetone spray.