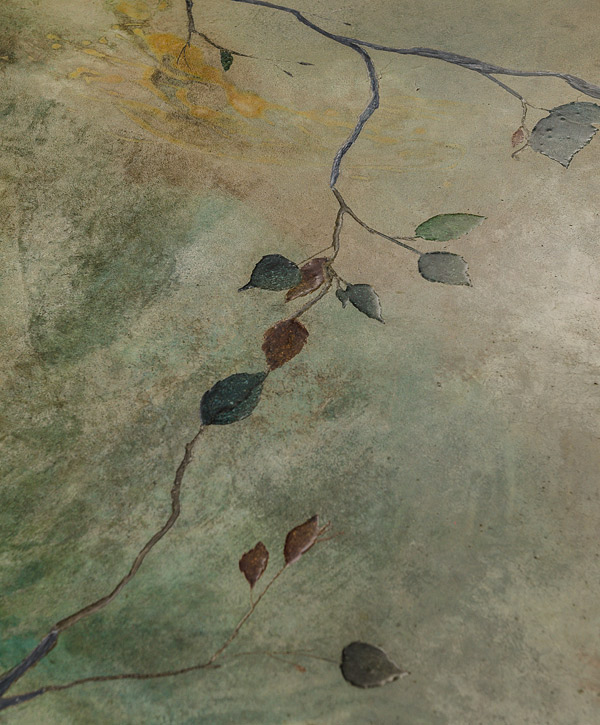 But he hasn’t been able to get the hang of retirement.

“The beginning of Concrete Polishing & Artistic Staining of Alaska represents my fourth retirement failure,” he admits.

“I can’t seem to do it. Too many ideas emerge whilst resting too much.”

CPASA emerged in 2002-2003 when Jim and his wife, Lindsay Noah-Vermillion, were researching finishes for the concrete floor of a loft in their home in Chugiak, Alaska. They found inspiration in the work Gaye Goodman had done with acid stains.

“The diamond polishing process and the acid staining process were argued to be mutually exclusive, and I didn’t see why that had to be,” he says. “So we started experimenting with how they might be combined.”

The Vermillions bought polishing equipment and started on their own garage floor. “I think we ground, polished and stained our own shop floor three or four times, different sections using different sequences. We worked out how to put the two together and have an acid-stained floor that was also glossy. We figured out how to do something that everyone said you couldn’t do.”

The Vermillions’ next step was to use their newfound skills to start a business. Although they were newcomers to the construction industry, the Vermillions drew on their experience running an auto care center, a coffee shop, an outdoor outfitting business and other enterprises. “We figured if we liked it and figured out how to do it, we would offer it and see if there was interest,” Vermillion says. “Initially, we thought it would be seasonal, with the construction industry. But as it turned out, it’s been year-round since we started.”

At the Anchorage home show, they met an engineer from nearby Joint Base Elmendorf-Richardson who was seeking a way to rehab a concrete stairwell at the military facility. 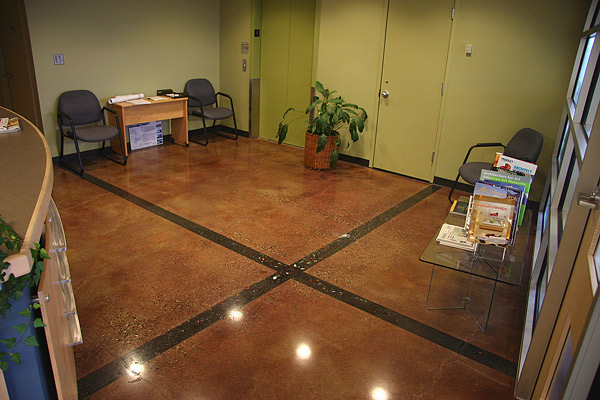 “He asked us to come and do a mock-up on an unused section of the stairwell to see whether we could do something he thought would work,” Vermillion says. “We did, he liked it, and then they had to put it out for bid. But everyone who came to look at it couldn’t figure out how we did it. So we got a no-bid contract.

“That was our first commercial job. It was a lot of work. You develop a lot of good core strength when you’re polishing on concrete stairs,” Vermillion says.

Lindsey contributed design work for several years, but now, she is no longer active in the day-to-day work.

Most of CPASA’s work comes from word-of-mouth. “I am a bit picky about the work we take on,” he says. “If the owners are looking for a low-end, quick and dirty performance, I can’t find room in my schedule for them. I don’t want my name on a job that won’t look good and be durable.

“I once got a job because of being so picky. While I was bidding on rehabbing the floor in a store in a local mall, the mall manager tried to talk my client into having a competitor of mine do the polishing. The manager said, ‘Jim’s too picky, you should have X do the job.’ The customer told me this was the deciding factor in choosing us to do the floor. She figured that us being picky about doing the job right was just what she wanted in a contractor.”

Vermillion doesn’t hesitate to contradict corporate customers who want to specify a sealer coat on their polished floor. In Alaska, he says, that approach won’t work because of the abrasive traction grit that customers track into buildings from the sidewalks and parking lots.

“I have argued several of the corporate players into a proper polishing protocol, turning away their standardized low-end grinding-and-guard-coat approach,” he says. “If we can’t do the job right, I don’t want the job.”

Vermillion at one point hired a marketing consultant in Anchorage who set up appointments for him with architects who wanted to learn how to specify polished concrete floors. That has led to some useful relationships. “We’re often called to consult on a project in advance of it being released for bid so we can talk about how to achieve what the architect perceives as the vision and have some input into their specifications,” Vermillion says.

CPASA is also sometimes called upon to rescue floors that another contractor hasn’t been able to polish properly. Vermillion was once called to a Lowe’s store 12 days before its scheduled opening. An out-of-state contractor had left a polished floor with densifier streaks and a 400-grit finish where 1,100 grit had been specified. “We did a whole bunch of 18-hour days,” he says. “We got it done 12 hours before opening.”

Tried and true tools
Vermillion uses equipment, tooling, stains and densifiers from several different manufacturers. “Reliability is key to me. I have both counter-rotating and planetary grinders — it doesn’t matter. What matters is if the tooling runs flat on the floor and if the machine itself is reliable,” he says. His big grinders are counter-rotating models STI-4430, STI-3030 and STI-2420 in the Prep/Master series from Substrate Technology Inc.

When it comes to chemicals, “I use different manufacturers for different purposes,” he says. “Some reactive stains we adjust the chemistry of to suit us for a particular purpose. We have some custom reactive stains that spring off some work done by Roy Snowball in New Zealand years ago. We use water-based as well as solvent dyes, and we’ve been using dyes mixed with densifiers since before that was commercially available.”

Whether the floor is new or a rehab, proper application of densifier is essential, says Vermillion. And sometimes his idea of “proper” doesn’t agree with the manufacturer’s instructions.

“The concrete has to be fully densified so that it builds up that abrasion resistance within the wear surface of the slab,” he says. “It’s chemistry, and it requires a reaction, and reactions take time, and if you don’t keep it wet during the reactive period and give it time to react, you can’t build adequate product with adequate durability and wear resistance.”

On some jobs, Vermillion has done six applications of densifier. “Manufacturers recommend two applications, but particularly rehab floors need more. I haven’t found a way to predict how many applications a floor’s going to take. But you have to saturate the floor and give it time to react.

“Sometimes we will go outside the manufacturer’s protocols to make sure it’s fully saturated. Manufacturers call for allowing the densifier to remain on the floor for half an hour or 45 minutes, but we’ve done much longer periods, allowing the material to begin to dry into the floor. That’s the artisan’s eye or experience, to know when you can get away with it or when you will have a lot of work on your hands or ruin something you’ve partially completed. That’s one difference between a beginner and someone who knows what they’re doing.”

Vermillion has had to be an experimenter because “we don’t get manufacturers’ visits here,” he says. He says his home in Chugiak, near Anchorage, is “a half-day drive from the end of the contiguous highway system in North America.”

“It’s hard to find out about new products (out here),” he says. “I guess that’s part of what fosters creativity.”

Encouraging an industry
Vermillion has been sharing what he’s learned by working on the American Concrete Institute committee that created ACI 310R-13, the new Guide to Decorative Concrete, which was published in December.

He’s also the head of the newly formed Subcommittee 310-0J, Polished Finishes, and he will lead efforts to write a new ACI specification for polished concrete flatwork.

“I got involved because of seeing so many people, owners and architects, who didn’t understand how to achieve good polished concrete,” he says. “There was no excellent resource for them to go to that says, ‘This is how to do it.’ People were saying and claiming different things, like saying a coating on partially polished concrete was polished concrete — as a result, making owners afraid to ask for polished concrete. The best way to address that, I thought, was nationally.”

Another way Vermillion has been sharing his knowledge is by training employees in an apprenticeship system. CPASA’s crew leader, Stephanie Deal, “has progressed from a rank beginner to journeywoman status,” he says. “She’s both artistic and able to run a grinder.” The company currently has three part-time apprentices and adds other part-timers, usually candidates for apprenticeship, when necessary. Vermillion mentions Alanna Blough and Nicholas Wolfe as apprentices who have especially contributed to the company’s development.

To further the idea of apprenticeship, Vermillion helped found the Guild of Artisan Polishers a couple of years ago. “We’re a small group, invitation-only — sort of a medieval guild. Members are invited based on the quality of their work,” he says. “We’re continuing to develop that organization. We mainly correspond by email and calls. We haven’t had any physical get-togethers yet.”

In fact, Vermillion hopes to sell CPASA soon to that he can focus more on GAP. “I’d love to find someone to buy our business who would want to maintain the quality, so that I could wrap my heart around training and transition into it,” he says.

“Our equipment’s heavy, and I’m a thin guy who’s getting older.” 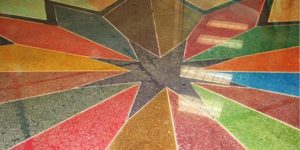 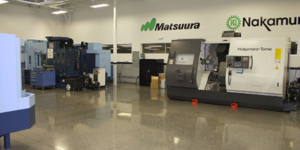