When Tom Zilian, founder and president of Rhode Island-based Madstone LLC, was contacted by Alex and Ani, a national jewelry retailer with headquarters in the Ocean State, he thought he would be bidding on a straightforward job. They wanted to polish the concrete floors at their new location on Weybosset Street, in Providence, R.I. One problem — the substrate in the building was gypcrete and not polishable. Typical overlay products won’t bond to gypcrete. A clear-cut job was becoming complex.

Luckily, Zilian knows his business, and he knew of a product that would work. “We’ve worked with Duraamen products quite a bit,” says Zilian. “They have one, Sgraffino, that’s an excellent microtopping, and it adheres to gypcrete.”

Victor Pachade, general manager of Duraamen, says, as far as he knows, Sgraffino is the only microtopping that adheres to gypcrete. “This was a fantastic solution for Alex and Ani,” he says. “I don’t know what other resolution they could have come up with, particularly if they wanted the job to remain cost-effective.” 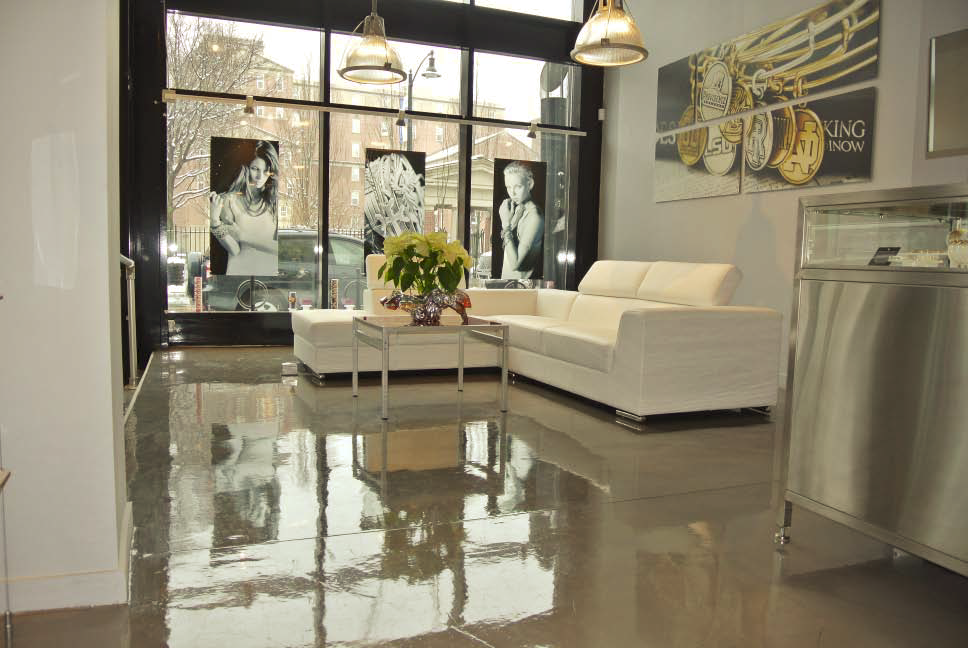 Not exactly like polished
“Sgraffino is a great way to resurface a concrete floor,” says Zilian. “Although it doesn’t exactly look like polished concrete, when done correctly you’ll end up with a beautiful floor, with a smooth, burnished steel-trowelled finish. Another advantage is how much control you have with the color.”

Zilian presented Alex and Ani with the Sgraffino option, integrally colored with Duraamen Colorfast. He showed them examples and they agreed. “A big part of presenting customers with choices involves managing expectations — being upfront about the pros and cons of different options,” says Zilian. “No product is perfect. Each time you use something you end up with slight variations in the result. An important aspect of working with customers is making sure they understand that.”

The space was fairly large, about 5,000 square feet, with an office area in the rear and a retail space up front. Alex and Ani wanted the floor completed in time for the 2012 holiday season.

As with most decorative work, preparation is as much a key to a quality end result as any other step. In this case, the gypcrete floor was relatively stable, allowing for a fairly uncomplicated approach to preparation. Madstone prepared the floor by abrading it with 40-grit screen, followed by a thorough cleaning with a walk-behind automatic scrubber, leveling high and low spots while creating a surface amenable to priming. The floor was primed with CP1000 polymer primer. Duraamen recommends applying CP1000 with a garden sprayer, one coat the day before placing the Sgraffino and the second coat the day of the job. For this job, Madstone chose to pour the primer directly on the floor and spread it with a mop. “We did this three times” Zilian says. “This does two things. First, it stabilizes the substrate. Secondly, it allows for a chemical bond between the substrate and the concrete overlay.”

Zilian originally planned to do the job in one continuous pour, but Alex and Ani wanted to continue getting the store ready. Consequently, he decided to do the office area and retail space separately. “It added a few days to the job, but didn’t really create any problems for us,” says Zilian.

They did the retail space first, mixing the Sgraffino with Duraamen Colorfast, a powder designed specifically for integrally coloring cementitious materials. Placement was done in continuous pours to minimize variations and defects.

The dance
Zilian describes the process of putting down a microtopping as a ballet. “Everything has to be choreographed,” he says.

“We started with white based Sgraffino and added a carefully calculated portion of Colorfast Charcoal Suede colorant. This color tends to not completely disperse, so we strain it and premix it with a cocktail mixer,” explains Zilian. 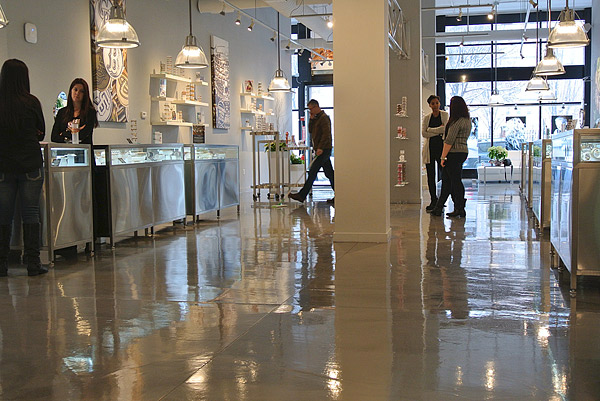 “The mixing station was set up to provide continuous flow of product to the crew on the floor. Containers were all tumbled beforehand. A holding tank was created for the CP1000 with a large trash barrel to quickly measure the amount of product for each batch,” says Zilian.

Sgraffino was applied using Magic Trowels — rubber squeegees, handled with a specific angle and degree of pressure. Floor technicians switched places, rotating in and out of areas, ensuring the patterning of the floor remained consistently natural and organic. “Each technician has a slightly different sense of touch” says Zilian.

The microtopping in place, the floor was screened (100-grit), vacuumed and washed before applying a clear epoxy resin. Clear urethane, to protect the epoxy, was the final step.

“The amazing thing is that you can put all this down on a floor and it’s only 1/8 inch thick,” says Pachade. “And it looks amazingly good. In fact it wasn’t long after Alex and Ani was done that a competing jewelry store called and is now refurbishing their floor with our products. You can’t get much more of an endorsement than that.”

Most challenging aspect: Existing floor was gypcrete, which is not polishable and not amenable to bonding with most microtoppings. 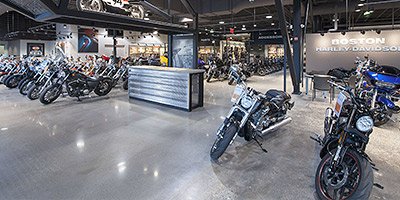 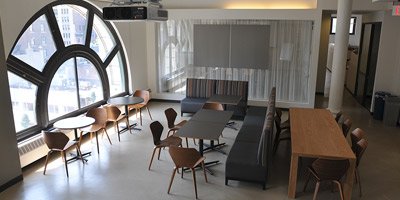