When asked if concrete contractors should add safety surfacing to their roster of services, George Coon’s answer was a question that was succinct and to the point: “Do they want to make money?”

If so, the owner and operator of AquaSeal Resurfacing LLC, in Louisville, Ohio, says they should look into it. The topping option is growing in popularity and application uses. “I’ve been a caulking, sealing and restoring concrete for over 40 years and this is a lot easier to do,” he says.

Coon has been in the safety surfacing business since 2006 when among the toppings he distributed and installed was PebbleFlex, a spherical-shaped polyurethane granule that predates the polyolefin PolySoft. In 2011, when Landscape Structures Inc., a leading designer and manufacturer of commercial playground equipment, acquired the PebbleFlex company, his distribution services were no longer needed.

Soon, as the PebbleFlex product became harder and harder to get from LSI, Coon discovered PolySoft and fell in love with it. “It is 10 times better than anything else out there,” says Coon, who now distributes and installs PolySoft, as well as other safety surfacing products. “No mold will grow on PolySoft in and out of the water. Colors always stay bright and vibrant because it has a UV inhibitor. And it can stay up to 60 degrees cooler than other surfaces.” Not to mention, he adds, it can be troweled vertically and overhead, something you can’t do with EPDM or TPV rubber granules.

Coon says he still uses PebbleFlex when a customer requests it — “I still have some excess pallets and I’ve been buying other installers’ leftover stock” — but repairs to existing PebbleFlex surfaces can be made with PolySoft.

The trick to applying either product is to use a screed box. “It makes production go faster and reduces job time from four days to two,” he says. “And the screed box doesn’t waste any material. It puts down exactly 3/8 inch.” He also uses power trowels, such as the Power Pole Finisher, from LR Tools Inc., for smaller jobs and the HoverTrowel for larger jobs.

Coon says he also does quite a bit of broadcast work with PolySoft, the safety surfacing material he installs most often. “You just put the binder down and throw the smaller granules into the binder like you’re feeding chickens,” he says. “All you need is a 5-gallon bucket. You don’t even need a trowel.”

The resulting surface is similar to an epoxy and stone floor, he says, “but it’s more rubbery. It grabs the feet and will keep someone from slipping, unlike epoxy floor grit. And it’s easy to clean.” He recently completed broadcast jobs for Great Wolf Lodge in Dallas, Texas, and Stowe Mountain Resort in Vermont. 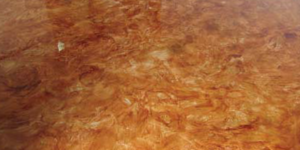 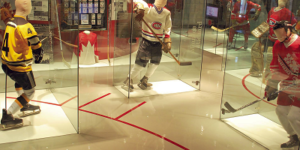 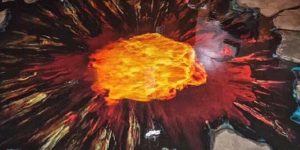 An Epoxy Hole to the Middle of the Earth