Designed and built by Scott Cohen, owner of Green Scene Landscaping and Swimming Pools, in Chatsworth, Calif., the “staycation” resort only retained one element from the previous backyard expanse: a wooden pergola at the back of the property, something Cohen thought was too small for the massive makeover. 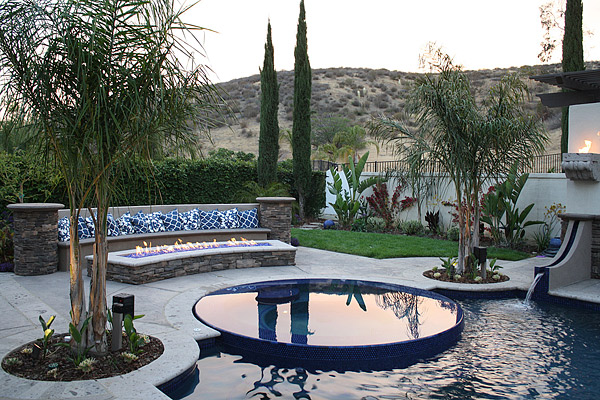 “The homeowners wanted to keep the pergola and I had to figure out how to tie it in to make it work. Its location also dictated the location of the swimming pool,” Cohen says. His solution was to make the pool longer than the pergola on both ends, centering it to the pergola, and to visually tie the pool and pergola together with four runnels, similar to the narrow channels used in ancient Spain’s aqueducts that allowed water to flow from one place to another. “I stole the idea from Tarragona, Spain,” he confesses.

The runnels are positioned to create three cabana-like areas along one of the pool’s edges, where family and guests may lounge. Each runnel is accented with a flaming torch ensemble made by a Mexican craftsman who carved them out of Cantera stone. “The craftsman worked from a 3-D sketch we supplied and he was able to get all four to look nearly identical,” Cohen says. “The details are quite impressive.” 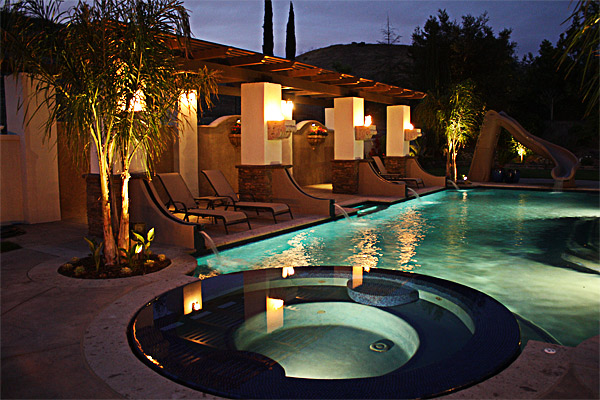 Three planters attached to a wall behind the pergola and the coping for the pool are also carved out of Cantera stone.

Something for everybody
To help him design backyard retreats, Cohen says he first doodles several concepts and then uses SketchUp to create a 3-D model that homeowners can view on a computer. He finds the 3-D model very important when conveying the concept to homeowners, he says, because it helps all parties see how the project will look from different angles both on the ground and from vantage points in the house.

One of the biggest influences of this design was the young family’s penchant for socializing, Cohen says. “They make up holidays in between holidays so they have an excuse to entertain,” he says with a laugh. The couple has a 10-year-old son and a 4-year-old daughter, so the backyard setup needed to accommodate large groups of both adults and children. 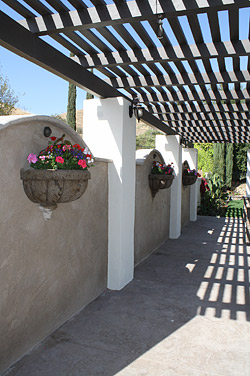 At the grown-up side of the backyard, a perimeter overflow spa, which Cohen calls an “illusion spa,” flows into the pool. Its flat, waveless surface “gives the impression you can walk across the water,” he says. “It makes for a very cool effect, especially at night.” Behind the spa, there’s a conversation area complete with pillows and a 12-foot-long fire trough.

At the other end of the pool, there’s a big slide for the kids and a wide-open grassy area behind that where they can play.

At each end of the pool there is a concrete table with built-in seating. “That’s one of my signature touches,” Cohen says. “It’s a super alternative to a swim-up bar. It provides the same sit-around-and-have-a-cocktail experience at a fraction of the cost.” And the kids like their table because they can sit in the water and play games like checkers, backgammon or cards, he adds, and have a place for their drinks and snacks.

Midway along the pool’s edge closest to the house, there’s a Baja or sun shelf, “one of the hottest trends in pool design today,” Cohen says, where people can enjoy each other’s company while sitting in shallow water. It features oversized steps wide enough to hold lounge chairs.

Overall, he continues, the pool features what’s called a sport layout, where it’s 4 feet deep at the ends and 5 feet deep in the middle. “It’s great for playing volleyball,” Cohen says, noting that the 44-by-18-foot pool is equipped with places to attach a net. 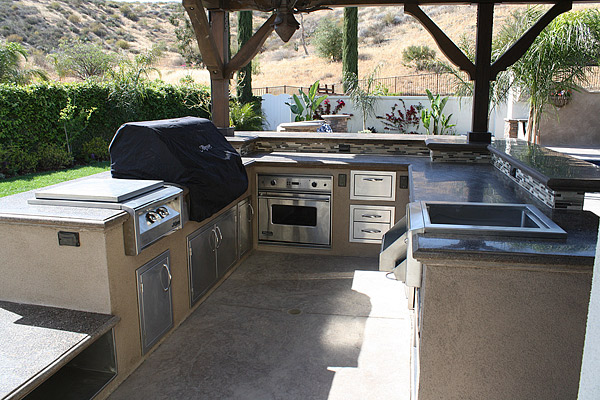 Everything and the kitchen sink
As part of the backyard renovation, Cohen also built the family an outdoor kitchen, complete with high-end, stainless-steel Alfresco appliances and a cast-in-place concrete countertop hand-seeded with recycled beer bottle glass and accents of blue glass.

“To bring out the blue in the swimming pool, we used a light seeding of blue glass chips dipped in silver,” Cohen says. “When you grind and polish you end up with little pieces of blue glass and miniature mirrors. It’s a very cool effect. Subtle, yet effective.” 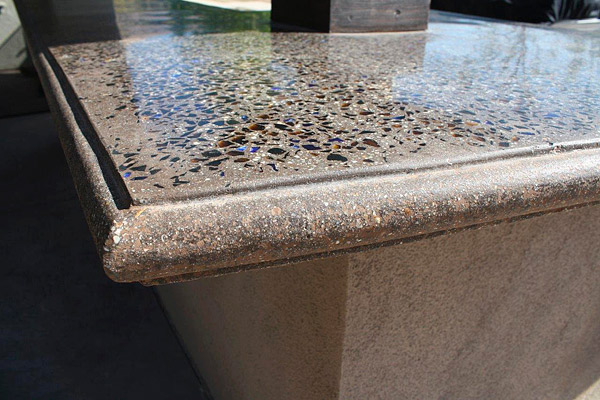 The project also integrated ample outdoor lighting and speakers throughout the landscape so the homeowners can control the mood for a variety of events. “That really brings a project like this together,” Cohen says.

From start to finish, the entire project took Cohen about six months to complete and ran about $265,000. He says his crew fluctuated between three and eight men, depending on the task performed.

“I never get tired of seeing my projects going from concept to completion,” Cohen says. “When I was a kid, I loved to play with Legos. Now the blocks I use are just heavier.”

Scope of project: Design and build a residential backyard resort in that includes an outdoor kitchen with a polished concrete countertop and a 792-square-foot concrete pool surrounded by a stamped pool deck.

Most challenging aspect: Tying the new backyard design to an existing pergola.

Are you interested in learning more about Cohen’s work? If so, check out “Scott Cohen’s Outdoor Kitchen Design Workbook” where, step by step, he covers how to cast countertops and embed glass. This and other Cohen titles are available for purchase from the Bookstore at ConcreteDecor.net.