Question: We had colored stamp work installed in the summer of 2013 at our home in Kentucky. It is failing after the first winter. My concrete contractor wants to warranty his work but does not have an answer as to what happened and how to fix it. Can you give me a clue?

Large parts of the United States recently experienced a brutal winter of cold temperatures and record snow and ice accumulations. As I write this in mid-March, yet another blast of winter weather is pounding the Mid-Atlantic and Northeast parts of the country.

Residents of these areas are used to snowy, icy winters, but what made the winter of early 2014 so harsh was the extent of the affected areas and the numbers of storms these areas endured. Cities such as Atlanta, Nashville and Dallas, that may see one ice storm during a typical winter, were hit three or more times with ice, snow and freezing temperatures. Even regions of the U.S. that we associate with harsh winters were taken by surprise at the extent of this year’s cold. This was the first year in decades where 92 percent of the Great Lakes froze over — now that is cold! These are areas that are not used to this type of weather, and in springtime the long-term effects of a hard winter on exterior concrete became clear.

So now that I have stated what most of you experienced — it was a long, cold winter — what does this have to do with the question about stamped concrete failure?

The picture the homeowners sent clearly shows a stamped concrete patio where the top layer of the concrete is failing. Additional information provided later by the homeowner confirmed that color hardener was used and that this region of the country (Kentucky) saw an unusually cold and wet winter. It is not much of a jump to conclude that the harsh freeze-thaw cycles have caused the top surface of this concrete to fail.

When water freezes it expands 9 percent. Add up multiple freeze-thaw cycles with lots of moisture, and the potential for damage increases significantly. Another important fact to consider is that when water freezes, the 9 percent expansion can exert upwards of 100,000 pounds per square inch of pressure. That is a massive amount of pressure, and when you consider that most commercial concrete paving is below 10,000 psi, it’s a no-brainer which material wins that battle. It actually speaks volumes to the strength and durability of modern concrete when you consider how little of it actually does fail when exposed to those kinds of destructive pressures.

The picture of our damaged residential patio also shows that the failing thin top layer looks to be color-rich. This is an indication that the color hardener was not applied properly — specifically, that it did not wet out and become one with the concrete substrate. In essence, the color hardener became a thin, weak color layer on top of the concrete, kind of like icing on a cake. The harsh winter created a situation where water migrated into and under the top thin color hardener layer. Throw in multiple freeze-thaw cycles and it was not long before the top layer broke away and the homeowner ended up with the mess we see now.

I want to point out that there was no mention of deicing salts being used. The question of whether deicing salts are a direct cause of concrete damage has been debated and studied for decades. Both sides of that argument claim there is no conclusive proof either way. I personally recommend avoiding deicing salts on stamped or decorative concrete, from a standpoint of avoiding any potential risk as well as protecting an investment.

While this case is specific to color hardener failure, there will unfortunately be many other situations where concrete flatwork, decorative or otherwise, will succumb to the harsh winter months of 2013 and 2014. This leads me to the next chapter in this ticking time bomb scenario — who is to blame? That is usually the second part of every question I get on this subject.

I commend the installer in this particular case, as he has stated he wants to honor the warranty and make it right. Homeowners are usually quick to point the finger at the installer, and in many cases who can blame them? Not even a year after having a premium stamped concrete patio installed, a large portion of the surface is falling apart. What was supposed to be a “value-added” concrete patio is now an eyesore and possibly even a tripping hazard. But is this the fault of the installer? Can environmental conditions — an extra-harsh winter in this case — take the blame and allow the installer to wash his or her hands of the problem? I have heard both sides of the argument, and in certain situations both sides can make a pretty strong case. The one fact that always comes to the forefront in this debate is that millions of square feet of concrete are exposed to harsh winter conditions and deicing salts year after year and perform without issue. If the precedent is set that a significant amount of concrete can withstand the harsh conditions, shouldn’t all concrete pass the test? The key variables that remain are the quality of the concrete and the quality of the installation.

In regard to repairing this particular scenario, there is not a lot that can be done. In some cases all the loose failing material can be removed and an overlay can be applied. In some cases a cross section can be applied that’s thin enough for the pattern to still be seen even after the overlay is applied. In most cases, the owner paid for stamped concrete, and that is what they want. A stampable overlay can be used in some situations, but in most cases rip out and replace is the only choice.

There is no way to tell how many square feet of stamped concrete fell victim to the polar vortex of 2014. Now that the snow has finally melted and people have ventured outside to take stock of their patios and driveways, who knows how many found freeze-thaw damage?

Quality has become such a clichéd word in our industry. Everyone claims to offer quality products and services. Mother Nature has provided her unbiased opinion on who actually has the right to use that term moving forward.

Chris Sullivan is vice president of sales and marketing with ChemSystems Inc. He has led seminars and product demonstrations throughout North America. Reach him at [email protected] 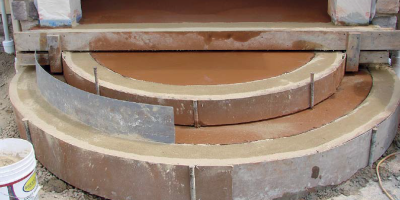 When you are finished pouring a set of half-round steps using these techniques, take a picture and hold it next to a set of regular steps on your next estimate.

How to Place Concrete in Cold Climates 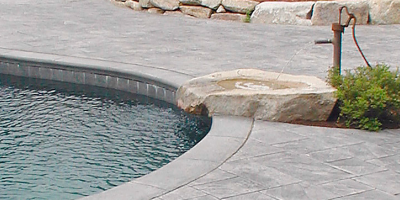 Got cold feet about offering decorative work in wintry climates? It's being done with great success!