Connecticut-based faux-bois artisan Michael Fogg spent eight years as a journeyman cabinetmaker and architectural woodworker. He then managed his own cabinetmaking business for six years before feeling stifled. “I had the idea that I would do spec furniture rather than custom cabinetry,” Fog recalled. “I had some ideas for furniture I wanted to make and figured that concrete was the way to do it.”

The art of faux bois, French for “false wood,” has a long history of artistically imitating wood in various media. Some of Fogg’s early pieces were tables featuring wooden tops on faux bois bases. Now, he uses concrete entirely. “People seem to respond to concrete just as is,” he says. “I haven’t had time to do woodworking since I started.”

Concrete appeals to Fogg because it’s a less restrictive system than what he experienced with his woodworking. “With concrete you can smear on some more or make a slurry and fill it in,” he says. “The other cool thing about concrete is that it gets harder and harder all on its own — you don’t have to fire it. And the harder it gets the more fine the texture can be.”

Fogg sculpts his creations using hand tools and ferrocement, so-called because it combines steel with portland cement and other ingredients. The ECC (engineered cementitious composite) Fogg uses is very similar to what some concrete countertops are made from, he says.

Though he’s been focused on furniture, Fogg plans to pursue larger projects such as building installations and architectural pieces such as pergolas. “I look at trees differently now,” Fogg says. “They’re more like sculpture.” 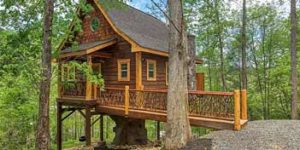 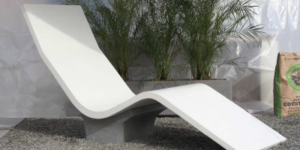