Question: I recently received a phone call from a concrete materials distributor who was working with a contractor to install a concrete dye on a relatively new concrete slab. The concrete was a 3-month-old, 1,200-square-foot interior slab, finished without any type of a film-forming cure or sealer, and in good condition. Water soaked into the concrete within three seconds, and the contractor performed a mockup with a dark brown dye diluted in acetone that the owner had approved a few days prior. The problem occurred when they applied the actual dye to the slab. Although they followed the recommended coverage rate for the brown dye and applied it with an airless sprayer, it yielded virtually no color. Multiple applications provided the same result — no color. Everyone was scratching their heads, including me — until we started probing a little deeper and looking at processes and equipment that are often overlooked.

This was one of those decorative concrete “mystery problems” that occur every now and again with no plausible explanation – until you stumble upon something and have an ah-ha moment. After working through the standard protocol of questions, and then probing deeper, I was still stumped. This was an experienced installer who had many years and dozens of successful concrete stain and dye projects under his belt. I was also working with an experienced distributor who had more than a decade of product knowledge and training with these particular systems.

They followed all the proper procedures, and the concrete was in great condition. The dye tested fine when spot-applied with a brush and the application was sound, and yet no color.

I initially thought it could be a very porous concrete slab soaking in the color, but that just did not feel right for this situation. I know the suspense is killing you, so let’s just jump ahead to what the problem was.

It turns out that when the installer went to apply the product he plugged his airless sprayer into an air compressor used by the framing contractors for their nail guns. The pressure was at or over 100 psi, which atomized the dye coming out of the airless sprayer so much that the color was lost to the atmosphere. The initial mockups had been applied with the airless sprayer at pressures between 25 and 50 psi, which yielded great results.

To be honest and provide full disclosure, it was the installer who discovered the issue by going back through his procedures and double-checking all of his equipment and processes.

I had seen this atomizing phenomenon a few times in the past, but it had always been with sealers being applied in the heat of summer or in windy conditions on an exterior slab. This was the first time I had seen the issue on an interior slab, which is why I did not even consider it as a possibility. The project was located in a high-altitude location in the arid southwestern U.S., which fueled the process of rapid evaporation of the solvent-based liquid dye. Factor in the ultra-high pressure of the airless sprayer, and the dye had no chance of ever reaching the floor in a liquid state.

Don’t panic if this is confusing. This simply tells us that acetone evaporates more than five times faster than water and xylene at standard temperature and pressure. This is a no-brainer for anyone who has worked with an acetone-based dye or sealer.

This is a simplified explanation of what can be a complicated mix of temperature, pressure, sprayer tip size, solvent type and other environmental factors. In this case, the pressure was three to four times higher than recommended, resulting in the acetone dye forming such small droplets that the dye was more of a fog than a liquid coming out of the spray gun. This fog of solvent dye evaporated in the dry atmospheric conditions before hitting the surface, resulting in a fine dusting of dye on the concrete, which as an end result produced very little to no final color in the concrete.

Once the problem was discovered, the pressure was reduced and the spray application produced the desired dark brown color on the concrete floor. The main point to remember is that raising the pressure has a major impact on the amount of dye hitting the concrete.

Fortunately this type of large-scale application failure does not occur very often. What I do see occur more often is lost product when solvent-based sealers are applied with an airless sprayer in an exterior environment. In many cases, applicators are not even aware that they are letting money blow away in the wind, literally. If you apply any type of solvent-based sealer, dye or stain with an airless sprayer, I strongly recommend testing coverage rates and dialing in the pressure and spray tip to assure that all of the product is making it to the surface. Applicators could lose 20 percent of their sealer or dye to the atmosphere due to overpressure without realizing this was occurring. That is lost revenue and over time can add up to a pretty big number. 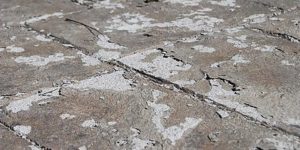 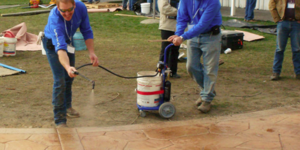 Spray it Forward: The Decorative Concrete Community Gives Back 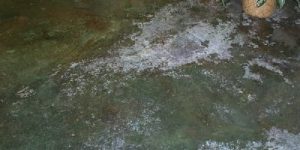