Last year, a homeowner in Augusta, New Jersey, went into a masons’ supply store looking for a fix for his pool deck. The pavers installed 15 years ago had settled. The deck wasn’t draining properly, and his homeowner’s insurance company had identified the paver portion of the pool deck as a hazard.

The staff suggested he contact Unique Concrete in West Milford, New Jersey, to learn about alternatives to pavers.

“The old pavers were laid in a sand base, which is typical,” says Todd Fisher of Unique Concrete, a family company owned by Fisher’s father, Barry. “Pavers started to get really popular around here 15 or 20 years ago. They didn’t understand the need to excavate, build up that base layer and get good drainage.”

The pool deck consisted of a concrete coping around the pool, surrounded by pavers. Originally, the homeowner had sought estimates on tearing out the concrete, taking up the pavers and reusing the pavers in a new deck. But the old concrete turned out to be up to a foot thick in sections and demolishing it would be expensive. A fence around the pool limited access to the pool area, meaning everything had to be transported by wheelbarrow.

“It was a very thick mass of concrete, but overall, for the amount of time that had elapsed, it was in pretty good shape and structurally sound,” Todd Fisher says.

Tying the old with the new
The project of tying together the old concrete with a new slab was a good candidate for Unique Concrete’s characteristic process, which it calls Handcrafted Stone.

The process involves two steps. First, the Fishers pour a structural slab that doesn’t have to be pretty. “Not only can we put in rebar, but we can also add structural polypropylene fibers that would prevent it from being stamped,” he says. When they resurface existing concrete, as in this job, they pour a 3/4-inch structural layer with both polypropylene and polyvinyl acetate fibers. “It is a blend we have come up with that provides enough workability to be placed and tined (roughed up) to achieve a mechanical bond for the decorative layer,” Fisher says.

The next day, they go back and pour a 1-inch-thick overlay. Instead of a polymer-modified material, they use a mortar-style mix, meaning there is no large aggregate with a small aggregate. Colloidal silica in the mix “acts like a pozzolan to make it durable,” Fisher says. The decorative layer mix consists of well-graded concrete sand, portland cement, colloidal silica, a polycarboxylate superplasticizer and PVA fibers, as well as the integral color. “It behaves more like a traditional concrete mix, meaning it trowels and textures better than a polymer-modified mix,” Fisher says. Their standard decorative mix tests at 5,800 psi. When necessary, he adds, they use a different mix tested at 8,000 psi.

The overlay is stamped with “old-fashioned cookie cutter-style stamps,” which make an impression that goes all the way down to the underlying slab. The voids between the “stones” in the pattern are grouted with a polymer-modified grout applied with a grout bag and tooled. The grout lines behave as control joints, preventing the “stones” from cracking.

The pool deck was completed in July 2014. The homeowner removed the pavers. The crew, consisting of Fisher, his brother, Timothy, and their father, installed 120 linear feet of drains, connecting them to an existing drainage system in the yard. Then they poured the 2,500-square-foot slab and the overlay, breaking both into sections because the fence limited access to the site. The Fishers textured the overlay with rollers of their own creation, then colored the integrally colored overlay with water-based stain, applying it to individual “stones” for a realistic look.

In addition to the uneven pavers, the homeowner wanted to replace an old diving board. Fisher suggested replacing it with a concrete diving rock. The homeowner was delighted with this idea and purchased a Jandy Sheer Descent waterfall and LED lighting to be installed under the rock.

“We created a rough shape out of concrete block and then used that to mount the plumbing and the electrical,” Fisher said. “We poured a skeleton out of a sand mix that could be rough-carved to the shape of the rocks. Once that was set, we came back with a vertical carving mix from Concrete Texturing that we manipulated by hand to create the final texture. We used texture rollers and skins.”

During the whole project, the pool remained full—of both water and people. Fisher’s crew floated polystyrene foam boards on the water to prevent material from falling in. That enabled the family to use the pool without interruption all summer, and the homeowner’s grandchildren have pronounced their new dive rock — more suited to their size than the old diving board — a rocking success.

Scope of project A pool deck made of pavers that had settled, as well as a concrete pool coping, were replaced with a concrete slab with an overlay textured using a process that creates the look of individual “stones” on the surface.

Most challenging aspects: A drainage system had to be created and tied into existing drainage; a diving rock had to be fabricated; and the whole thing had to be done next to a functioning swimming pool. A fence with two gates added a challenge to bringing in and maneuvering materials. 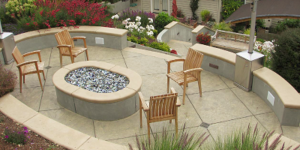 Taking a Concrete Patio To The Next Level 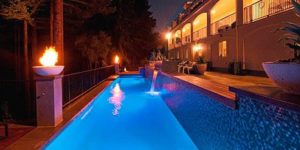 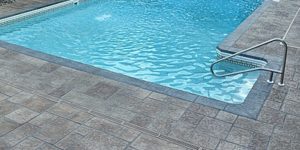