Wherever you choose to place a bench like this, it’s bound to make a splash. Jim Jenkins of CMJ Systems and JPJ Tech Inc. in McMinnville, Oregon, is widely known for his faux rock creations, but his friendship with a marine biologist has cast his net wider.

Jenkins offered a rock bench as a gesture of friendship, but the biologist wouldn’t accept it without his wife’s approval. Turns out, the wife desired a bench in the shape of a whale’s tail. “I’d never heard of a bench made to look like a whale’s tail,” Jenkins says. “I googled photos of whale’s tails and saw a photo that was bench-like in its orientation and replicated it.” So far, he has sold 24 through word of mouth alone and is now developing a business plan to provide the benches to art galleries and the retail market of seaside communities along the West Coast.

Jenkins has fine-tuned the creation process. Making one now takes only a fraction of the time it took to make the first six hand-formed benches. Originally, he sculpted the whale’s tail with the help of a cardboard-concocted template. “I covered the cardboard form with the hand-sculpted application of a thin fiber-reinforced cementitious composite,” he says. Once the mud dried, Jenkins grinded and polished the bench, which took more than four days. Now that Jenkins has fabricated a mold, he can cast, stain and seal a completed casting in eight hours, tops.

The whale’s tail success has given Jenkins the idea of making other animal figurines and sculptures. To go along with one of his recently purchased benches he has been commissioned to create a water feature in the shape of a whale’s fin. “I have not had so much fun with a piece in a long, long time,” Jenkins says. 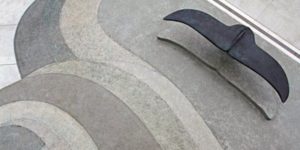