Unlike God almighty who, according to the Bible, created the world, its heavens and all forms of life in six days, the best Troy Lemon and his mortal crew could do was hand-form and carve a concrete replica of the moon in four. But their handiwork caught the judges’ eyes and netted Lemon’s team the First Place Expert’s Choice Award for the World of Concrete 2015’s Concrete Artistry in Decorative Concrete Demonstration held in Las Vegas in February.

The panel of judges from ASCC’s Decorative Concrete Council awarded Lemon the $700 top prize. The $300 second-place award went to Scott Kummer of Visions Below LLC in Laguna Niguel, California, for a piece with cast-concrete planters, a terrazzo-like floor and a polished tabletop.

Lemon, president of Cornerstone Decorative Concrete in Holland, Michigan, says he got his divine inspiration for the “Blue Moon” project while he was driving down the road, praying to receive a creative vision. This, he says, is what he saw: “The moon, having left its rightful place in the firmament above, finds itself entangled by the desires of this world. It is in anguish and longs to cast off the fetters and return to grace and fellowship.”

The abstract sculpture, which Lemon first sketched and then made a scale model in his hotel room in Marble Falls, Texas, where he was working before the show in Las Vegas, suggests this struggle through a twisted center, “as the moon yearns to break free,” he says. The blue in the title has nothing to do with the sculpture’s color, he adds. “The moon is blue, as in despondent.”

Lemon built the almost 7-foot-tall monument along with a patterned backdrop wall and floor in an outside exhibit area during WOC with help from a group of friends. In particular, “David (Averitt, owner of Supercrete in Paducah, Kentucky) stuck with me the whole time. He came early and left late,” Lemon says. Others that pitched in were Eric Hallen, Keefe Duhon and Ryan Van Horn. 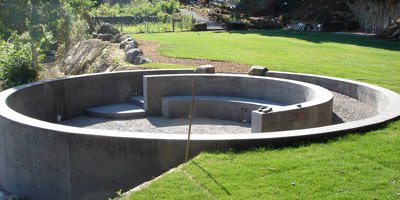 Seeing a finished construction project put to good use is something any contractor welcomes. 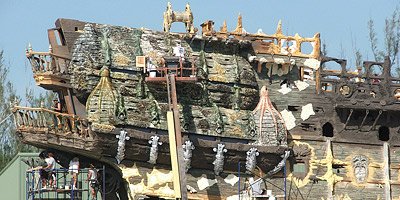 Remember the ship from "Pirates of the Caribbean: Dead Man's Chest"? Or the John Harvard statue that students gathered around during the hazing scene in "The Social Network"? What about the boat dock from the Hollywood version of "The Girl with the Dragon Tattoo"?