Catty-cornered northwest of the Indiana Convention Center, the JW Marriott Art Plaza has become a city landmark and a tribute to Hoosiers statewide since its grand unveiling in March 2010. The primary developer, White Lodging, commissioned this plaza in Marriott Place Indianapolis as a tribute to its home state of Indiana.

The project, which took six months to complete, was constructed on a mere half acre in this bustling downtown area. While the project was underway, clandestine work took place behind black drapes to block the public’s prying eyes. Integrally colored concrete with an exposed sand-matrix finish contributes to the plaza’s high-quality look. More than 400 cubic yards of concrete were used in 10,300 square feet. Smock Fansler Construction was the general contractor and concrete finisher.

Indianapolis-based artist Jeff Laramore and fabricated and installed by Linel Architectural Glass & Metal Solutions, when viewed from above, the bird is supposed to look as if it’s resting on a branch of a tulip tree, Indiana’s state tree. Tree leaves are etched into the plaza’s concrete and some sections are elevated as a dimensional backdrop for this popular songbird.

The plaza’s massive concrete foundation conceals large utility areas that service four hotels nearby. Custom-formed curved concrete retaining walls and sharp-angled precast stairs, all with embedded lights, contribute to this showpiece plaza’s appeal. A water-wall, also designed by Laramore, is made out of more than 1,000 pieces of granite and marble to represent peonies,Indiana’s state flower. 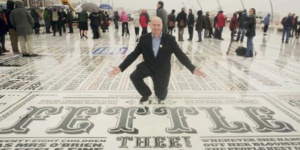 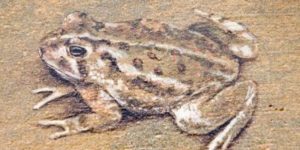