Demand for business-minded college graduates in the concrete sales, production and contracting sectors is so high that 100 percent of students from the Concrete Industry Management (CIM) program are immediately offered jobs after they graduate.

The program “is still to some degree an unknown,” says Heather Brown, an MTSU research professor who since 2001 has chaired the program there and has also taught a class focused on the applications of concrete. Brown notes the CIM program does not have a Midwest presence and program administrators are targeting that region next.

To gain more exposure, the program’s initial two courses — Intro to the Concrete Industry and Intro to Blueprint Reading — are open enrollment classes with no prerequisites. Program administrators hope these courses will spark students’ interest in concrete and influence them to enter the program.

CIM graduates, which total 50 to 60 per year at Middle Tennessee, receive a bachelor of science with a business minor and obtain American Concrete Institute and Occupational Safety and Health Administration certifications.

“I can easily graduate 10 or 15 more than this graduating class and get them jobs,” Brown says, adding sales positions, along with entry-level quarry and plant managers are popular jobs for recent grads. If graduates are willing to move away from home, she adds, they’ll definitely land a job.

Hands-on experience is a focal point of the CIM program, as students are required to complete a 400-hour internship and go on one paid industry trip. Additionally, undergraduates are often presented with the opportunity to work on unique projects at historic sites.

Refurbishing Alcatraz
This past summer, CIM students from California State University at Chico and the New Jersey Institute of Technology were involved with a preservation project on Alcatraz Island in the San Francisco Bay.

Invited by the Concrete Preservation Institute, which oversaw the renovations in conjunction with the National Park Service, CIM students took part in a 12-week program alongside returning, post-9/11 veterans, according to Scott Burghardt, director of operations for the project and CIM lecturer at Chico State.

With the aid of Clark Branum, a CIM instructor and a project manager at Diamatic USA, students created texture skins for various repairs to the infamous Alcatraz federal penitentiary.

For five years, Branum taught a decorative concrete class as part of Chico’s CIM program. He didn’t teach a class during the spring 2015 semester, he adds, because an interim director nixed it. The decorative class was replaced by a course geared toward concrete sales.

The repair mixture used by Branum and students to create the textured skins was made out of specialized rubber urethanes and fibers. The skins were made to mimic the look of the prison’s old granite stone. Samples were prepared in advance of the work to show the intended result.

Students enrolled in the CIM program must successfully pass the following courses to receive a degree:

Applications of Concrete: Students discuss and look at the technical aspects of various applications, such as roads, bridges and walls.

Concrete Capstone: In this senior course, students formulate a business plan for a new company or the expansion of an existing firm and put together bid packages.

Prior to coloring and antiquing, the team used SureCrete’s black Eco-Stain to color wash the repair surface. A diluted microtopping was also used as a white wash before coloring, Branum says.

The summer crew’s work focused on repairing various parts of the main prison building. Work included replacing/pouring railings, working on stairwells and old guard walks, demolishing and replacing beams, and improving landings and bottoms of stairs. “Most of the work was outside of the building where exposure to the elements is greater,” Branum notes.

CIM students received a $3,000 stipend and, when not on the island, stayed at a dorm-type facility in Marin County run by the parks service. Students were picked up and dropped off daily and boated out to the island. According to Burghardt, poor weather — namely fog and wind — was often an issue when it came to transporting students by boat and completing outside work onsite.

A solid career path
While it’s no Alcatraz, an ongoing study conducted by the American Society of Concrete Contractors is receiving input from CIM students at MTSU. The study questions the new ACI 437 documents, specifically those that focus on vertical wall finishes. Students and the ASCC will determine if U.S. contractors can apply these German-based documents, says Bev Garnant, executive director of the ASCC.

“We’re showing kids you can get into a good construction career,” says Garnant, who is also on the CIM National Steering Committee, a group of industry executives intent on ensuring the program’s success and expansion. “You’re not going to be hammering nails your whole life,” she says. And, with a CIM degree, you won’t always be the one shoveling concrete. 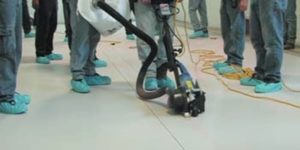 Learning Opportunities, Essential to New Skills and Improving Old Ones 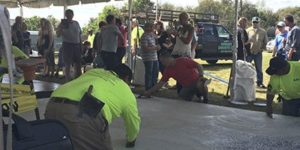 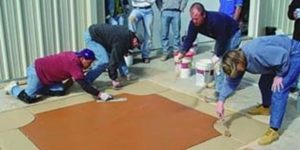 Concrete Industry Training Puts Your Company Ahead of the Pack