Cause and Effect of Curing Differential on Colored Concrete

In a recent conversation with Todd Scharich, decorative concrete technical specialist with the American Society of Concrete Contractors, this question came up: What happens when plastic, lumber or construction debris is left on colored concrete during initial curing?

We had both witnessed similar results — discoloration, blotchy color, random patterns — that are almost impossible to remove. We talked about the many jobs we had been asked to troubleshoot, what recommendations we made and what level of success we achieved.

After speaking with Scharich, I went back into my archive of articles and columns and, interestingly enough, could not find one that dealt specifically with this issue. There was a paragraph here and there in related articles on colored concrete and color inconsistency, but nothing specifically about the aesthetic issues that occur when plastic or other jobsite debris sits on concrete during its first few days after placement. Well, no time like the present to change that.

When plastic, lumber or construction debris is left on colored concrete during initial curing, the surface color gets blotchy and irregular, with colors usually lighter where the material had been sitting. The issue, known as curing differential, is caused by different levels of moisture at the concrete’s surface during those critical first few days to weeks of its life.

We all know, or should know, that curing concrete is critical to achieve proper strength, durability and appearance. All of the major industry associations such as the American Concrete Institute, Portland Cement Association, National Ready Mix Concrete Association, American Society of Concrete Contractors and ASTM International, to name a few, have published standards, position papers and/or required specifications for the proper curing of concrete.

These documents explain the science and benefits of curing concrete and recommend different processes approved for proper curing. Almost all of them make a point of addressing the potential issue of discoloration and streaks occurring if the concrete is not cured uniformly. According to a document published by the NRMCA, “Plastic can make dark streaks wherever a wrinkle touches the concrete, so plastic should not be used on concrete where appearance is important.” We know the outcome, but what is missing is why the problem occurs and, more importantly, how to remedy the situation.

Objects affect hydration
Depending on the type of cement, mix design and environmental conditions, the first three to seven days are most critical in regard to curing concrete and color development. If the concrete can cure consistently, the end result is usually a quality concrete product with consistent color and finish. If a foreign object retards the movement of moisture out of the concrete or traps moisture at the surface, a curing differential occurs, resulting in a color shift in the concrete surface.

Case in point would be random plastic or lumber placed on a concrete slab 24 hours after installation. While the physical strength of the young concrete can withstand the weight of the lumber and plastic, the chemical process of hydration is still occurring and is affected. This results in discoloration in the areas where the lumber and plastic were placed.

These foreign materials trap the hydration water coming out of the concrete, often making the concrete physically wet or damp where the objects were laying. In essence, this process is changing the water-to-cement ratio at the surface in those areas, which is one of the leading causes of light or washed-out color in concrete.

Debris not the fault
Interestingly enough, more than half of the curing differential issues I have come across were not created by jobsite debris. The issues were caused by wrinkles or air gaps in plastic covers or curing blankets, resulting in what’s known as “leopard spotting” because of how it resembles a leopard’s fur pattern.

In almost every case of curing differential I’ve dealt with, it’s too late to do much about it once the issue is recognized. The color shift is created by a chemical reaction and is permanent. The depth of the discoloration can vary depending on the material that was on the surface, how much moisture was present and how long the object sat on the concrete. I have seen discoloration from curing differential as deep as 1/8 inch into the concrete. In cases where it is lighter, surface sanding, polishing or grinding can help lighten or eliminate the discoloration or blotchy areas.

In most cases the easiest and most economical method for dealing with discoloration from curing differential is applying a solid color sealer or stain. A thin section overlay, like a microtopping, is another method, but is more involved and costs more. If the budget is lacking for a repair, then time will help. Over time the severity of the discoloration and blotchy appearance decreases.

As a side note, curing differential in gray concrete that’s going to be stained or dyed is also an issue. In these cases, the color variation and blotchy finish are often highlighted and exaggerated when the stain or dye is applied. In a few rare cases, the client actually appreciated the additional variation the random curing created, but those cases are few and far between.

Chris Sullivan is vice president of sales and marketing with ChemSystems Inc. He has led seminars and product demonstrations throughout North America. Chris was inducted into the Decorative Concrete Hall of Fame at the 2015 Concrete Decor Show. Reach him at [email protected] 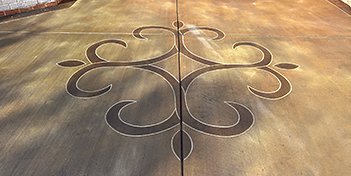 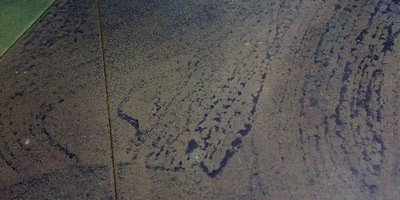 All things in polished concrete relate to physics and chemistry. With that in mind, let’s look at how moisture interacts with concrete and polishing chemicals, with an additional focus on efflorescence.