For the second consecutive year, the Concrete Decor Show held a Brawl in the Fall competition where seven preselected teams of decorative concrete professionals vied for a chance to win their part of $10,000 in cash and prizes, with the first-place team netting booty worth $5,000.

The competition was held on the floor of the sixth annual Concrete Decor Show in Indianapolis, Indiana. Show attendees received a ballot and were encouraged to observe and evaluate the work in progress, then cast their ballots for their favorite projects. The winning projects were determined by attendee votes and five judges — Chris Sullivan of ChemSystems Inc., Rachel Knigge of Rachel K Graphics and FloorMap Stencils, Mike Murray of Concrete Cares, Mike Archambault of Moderne Methode and Jim Peterson of Concrete Network.

“This year the level of competition was even better than the year before and that’s hard to believe,” says Jeff Hershberger, sales and operations manager with Deco-Crete Supply, the event’s sponsor. “The work was very creative. We were all very impressed” at the variety of products used, from epoxy and vertical coatings to GFRC and overlays, he continues. “Pretty much every facet of decorative concrete was represented and a lot of them even in the same project.”

One of the standards the judges evaluate in this competition is the use of different materials and techniques, and Keefe Duhon certainly achieved that goal. “The detail he had in his entry was just amazing and he utilized a lot of different things,” says Hershberger. “That’s what helped him win — how detailed everything was and how many different things he had going on.”

A Louisiana native, Duhon brought a touch of the bayou with him for his swamp-like scene, which featured an epoxy floor colored to look like water and accented with concrete trees and partially submerged logs. “People don’t see the swamp like where I’m from,” Duhon says. “They just see it on TV so I wanted to bring that to life.”

He used a stuffed raccoon, replicas of colorful fish and a concrete-molded alligator lurking in the water to create realism. The “water” was peppered with foot-friendly faux rocks. Strands of grass made from a T-shirt coated with Flash Patch, a SureCrete crack treatment product, and an Ameripolish green dye were so flexible they “will wave in the wind.” A behind-the-scenes boom box played Cajun music, which added that extra touch of ambience. All of these combined to clearly make Duhon the crowd favorite.

“People liked that they could walk on the rocks and take pictures of all the different elements,” says Hershberger. And the fog machine took the exhibit to a whole other level.

Duhon says he stayed “very humble,” during the competition. “It was awesome to hear the positive comments but my main focus was staying on what I was doing and have people wanting to come back to see more,” he says. “It wasn’t about winning or a losing. It was about the experience. The others were all awesome at what they do.”

Now that he’s had a taste of winning, Duhon plans to bring his best game to the 2016 Concrete Decor Show in San Diego. He says his plans call for more interactivity, which he believes helped propel him to the win. He’s already contemplating his next move. “If people think the swamp was cool, what I have in mind is going to be even more of a hit!”

This was Duhon’s first time participating in the Brawl, although he has been on other competitive teams, including World of Concrete 2015, where he worked on “Blue Moon” by Troy Lemon (who was also a contender in this year’s Brawl). Duhon thanks his sponsors, SureCrete and Kingdom Products — who are also sponsors of the Concrete Decor Show — RicoRock, Polytek Development Corp. and CTS Cement/Rapid Set.

Nathan Giffin, a judge in the inaugural Brawl, was part of the competition this year. He created a seating wall and fire pit for his entry, using products from Hardscape Systems, Flex-C-Ment, MortarSprayer.com and Walttools. For almost two decades Giffin has specialized in sculpting vertical decorative concrete with his Chicago-area company.

Hershberger liked Giffin’s entry because it was a real-world design. “It was something that you could actually do in your backyard,” says Hershberger. “Nathan didn’t want people to say, ‘Oh man, how did he do that?’ He wanted people to say, ‘Oh, I could do that.’ And he’s also obviously incredibly talented at what he does.”

Giffin says he wanted his entry to come across as achievable for many of the show’s attendees while also using a system that allows for creative freedom within the competition’s three-day time frame. “I chose to create something that I felt would resonate with contractors as opposed to fabricating something abstract,” Giffin says. “It really gives the guys an opportunity to create something that would compete in the regular arena of business. It resonates with homeowners and contractors who see that they’ve got something they can work with.”

He was certainly successful in that regard. Giffin says he heard “tremendous compliments” and had manufacturers approach him about buying the fire pit ensemble right off the show floor.

Ellie Ellis entered last year’s Brawl as a lark and won first place for replicating a plaster medieval scene she had previously made for a fireplace at her home. Her teammate this year, Eva Gallant, was her behind-the-scenes helper then, so they both knew what they were in for.

This year, Ellis created detailed molds for an 8-by-8-foot ocean scene featuring a mermaid, a ship, a full moon and numerous sea creatures. Both this year and last, her detailed molds and the care with which they were placed in the overall scene gained the team lots of points and appreciation from judges and onlookers.

“It was incredible artwork,” says Hershberger, and quite a show in progress. Each day, the duo donned costumes for the competition — one day Gallant was a pirate and Ellis wore a crown of sea stars and shells. On the last day of the competition they wore shirts printed with an octopus design that matched up when they stood next to each other.

Both Gallant and Ellis are experienced decorative faux finishers and decorative artisans who are members of the International Decorative Artisan League. Gallant has been recognized and certified by IDAL as a Certified Stencil Artisan. Ellis is a Certified Master Stenciler. The team thanks their sponsors — Deco-Crete Supply, Flex-C-Ment, KirtBag Carving Mix, Polytek Development Corp., Modern Masters, Brick in the Yard Mold Supply, and private sponsors David Kriel and Ted Grant. Ellis is planning to return to next year’s Concrete Decor show as an instructor. 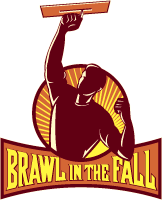 2015 Brawl in the Fall Sponsors

Many thanks to the generous sponsors that provided prize money and product donations to the competitors.

Special thanks to our 2015 host Deco-Crete Supply. 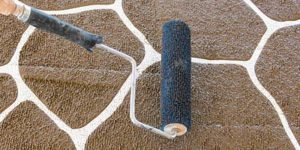 A Variety of Tools and Techniques Adds Texture to Concrete Slabs