From trailblazers of electronic gadgetry such as Steve Wozniak and Steve Jobs to musical legends Jefferson Airplane and the Grateful Dead, a whole host of seismic developments of the man-made variety can be credited to the San Fran environs.

The culture of invention and innovation extends to design, architecture and, yes, concrete. It was the Bay area where the brave new world of color and decorative treatment of concrete first made its appearance on the design and construction stage.

The setting: The San Jose/Palo Alto area, home of the renowned Stanford University and the phenomenon that would later be known as Silicon Valley, and Carmel, the picturesque coastal enclave to the south.

The players: A young business-school graduate from the Midwest, a Carmel construction craftsman and designer, a Stanford professor, a local businessman and the Peace Corps.

That’s concrete?
“I was training for the Peace Corps at Stanford, getting ready for assignment in Peru,” says Dan Sieben, the business-school grad from Illinois. As part of the training program, Peace Corps recruits were assigned to perform business-consulting work with a local company. This was intended to serve as valuable experience for the Peace Corps’ workers mission in South America — consulting for local businesses there.

For Sieben, the consulting gig was with an aluminum foundry in San Jose, owned by John Johnson. At the end of his stint, Sieben and Johnson went out for cocktails. Johnson showed him photos of “ornamented concrete” made by a client, Brad Bowman, with aluminum stamping tools made by Johnson’s foundry. There were three patterns: brick, tile and cobblestone. The term “ornamented” was Bowman’s label.

“And I said, ‘That’s concrete?’” Sieben recalls. Johnson said yes, but the client didn’t know what to do with what he had created. Sieben was fascinated, as he was experienced with concrete, installing foundations and the like back in Illinois. He went on to work in Peru with the Peace Corps for two years, during which he had time to think about his future. “My dream had always been to get involved with a small company,” he says.

The McDonald’s model
Intrigued with the potential of Bowman’s creations, Sieben devised three different business plans built around their use. The idea he liked best was inspired by the then-novel McDonald’s expansion plan Sieben had learned about at Northwestern — franchising. He sent his plan to Frank Shallenberger, the Stanford professor who had led the corps training program. A successful businessman, Shallenberger liked the concept and invited Sieben to visit when he completed his Peace Corps stint.

“And that’s what I did,” he recalls. In a borrowed car from his dad, he drove to California, making stops in Dallas and Phoenix to talk to architects. Armed with only three photos of Bowman’s work, “I walked into these architects’ offices and I got tremendous response.”

In California, Sieben stayed with Shallenberger and developed a case study for the professor’s small-business class. Schallenberger, enthused about Sieben’s idea, suggested they visit Bowman in Carmel, where Bowman had done a few “ornamented concrete” installations, mostly for well-heeled residents. One job, a “basket-weave” pattern in the pavement at the corner of 6th and Delores, is still there today.

Long story short: They agreed to form a company called Bomanite Corp. to commercialize Bowman’s creations. “He came to the table with a process, tools and a patent. Schallenberger brought capital, and I brought my time and business expertise,” Sieben says. It was April 1970.

Another key player — John Wilcox — soon joined the new company. He eventually teamed up with Sieben to help run the growing young enterprise.

Designs on Southern California
It was in Southern California, not the Bay area or Carmel, where Bomanite first made its mark on a wide commercial scale. Francis Sullivan and John Dryden, contractors in the Los Angeles and San Diego areas, were installing this ornamented concrete, Bowman told his new partners. They met with them and came up with the blueprint for Bomanite’s franchise agreements.

In these deals, Dryden and Sullivan got a break. There would be no franchise fee in exchange for training any franchisees that would subsequently sign on. “They took a chance and it paid off very well for them,” Sieben says.

John Dryden also introduced a new twist — applying a petroleum-based wax that enhanced the look of grout (joint) lines without the labor-intensive grouting process. This gave the stamped concrete a cost advantage over actual tile or masonry surfaces. Soon, the stamped-concrete/wax installation process was being used to “pretty up” display-home sites all over Southern California, Mike Dryden says.

A landmark development for John T. Dryden Inc. and Bomanite came in 1973, when the Getty Museum in Malibu wanted the look of ancient stone as part of its design theme. Bowman and Dryden delivered a “random stone” pattern for the concrete installation, complete with a weathered, aged look reminiscent of Pompeii and grass growing among the cracks in the “ruins.”

He eventually assumed leadership of his father’s company in the late 1970s and took the decorative-concrete revolution to Texas when the era’s high interest rates hammered real estate in California.

In Houston, the novelty of decorative concrete went over big, boosted by the oil boom that was underway. “We had tremendous response to our advertising in Texas, where no one had ever seen it before,” Dryden says. He eventually exited the trade, however, as competition flooded the market, eroding decorative-concrete quality and prices. He now heads Earth Toxics Inc., an environmental sampling and analysis company. 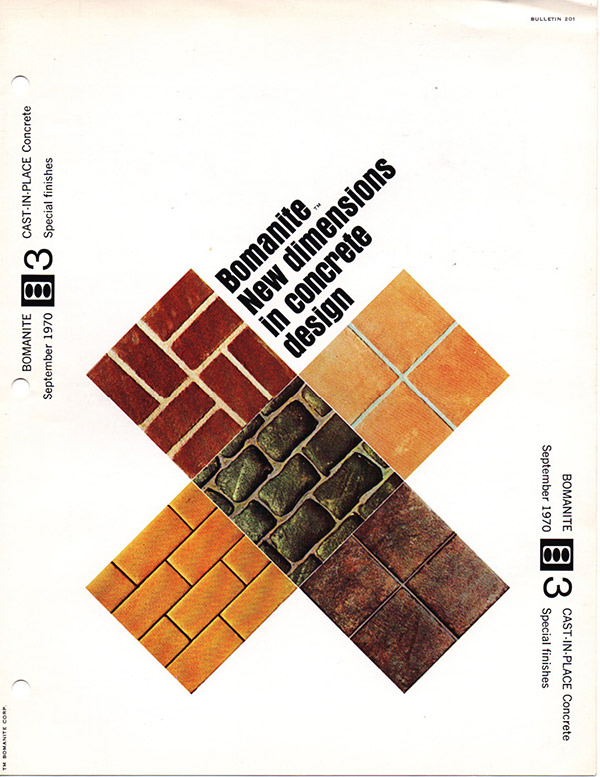 Harder and smarter
Southern California also was the setting for a legal drama that, Sieben says, played a key part early on in the company’s future direction. Bomanite brought a patent suit against a San Diego company that had allegedly copied Bomanite’s tools and process. However, Bomanite lost the suit and wound up paying a penalty to the defendant. But, realizing it would not be alone in this new decorative-concrete arena, Bomanite knew it had to work harder and smarter, Sieben says.

“That forced us to just do a better job than anyone else,” he says.

Bomanite raised more capital and developed an aggressive marketing operation. The primary target was landscape architects, who would theoretically specify concrete features in their designs. The initial marketing foray consisted of a four-page brochure with a cover letter and business-reply post card. “Normally if you get a 1 or 2 percent response, you’re happy. This got more than 26 percent response,” from all over the country and overseas, Sieben says.

He then embarked on a two-week sales trip that wound up being a two-month journey. In each town, he’d visit all the landscape architects who had returned Bomanite’s post card and ask them to name the best contractors who could do an exposed-aggregate driveway. Typically, the designer would name one or two contractors, Sieben says, and that’s who he went after as a franchise target, with unanticipated success.

“We sold it by having them see work done by Sullivan and Dryden. I’d tell prospects to come to California and visit an installation in progress and meet guys doing it. This was a very important part of the process of showing what this thing was, and how they can make money with it. It offered a way to get them away from straight concrete flatwork — something unique to sell their company in a more dramatic way.”

And, importantly, something to deliver a better return, a higher margin.

Sieben remained with Bomanite as president and CEO until 1989, when he sold his interest in the company.

Expanding the palette
Byron Klemaske, a colleague of Mike Dryden’s with John T. Dryden Inc. and later in Texas, remembers Palm Springs as a burgeoning market for this new phenomenon of decorative concrete in the 1970s. Fish-scale patterns — also called “European” — proved to be big sellers, as were the tile look and “running-bond cobblestone.” Color was added with shake-on materials.

Klemaske, now with T.B. Penick & Sons Inc. in San Diego, says imprinting with textures added a groundbreaking dimension to decorative concrete, conveying a more authentic impression of natural stone. An early landmark installation was at Epcot Center in Florida in the early 1980s. Klemaske credits Jon Nasvik, a pioneering decorative-concrete innovator from Minnesota, with developing the plastic tools that could produce such textures.

Diversification continued as Bomanite evolved in the years that followed, with the introductions of microtop finishes, reactive acid stains, toppings for existing concrete, stenciling and water-based color stains. Grasscrete — Bomanite’s pervious concrete system — made its debut in the 1990s. Described as a “green alternative to standard concrete surfaces,” the system can be used for emergency access lanes, delivery access routes, overflow parking areas and for intermittent drainage channels that help prevent erosion.

A huge fishbowl
David DeAngelis, a former Bomanite franchisee who also did a stint as Bomanite’s technical director, says the unique relationship of the company and its franchisees was at the heart of the culture of innovation that drove expansion for more than two decades.

“I like to say Bomanite Corp. was the center of a huge fishbowl, with all the fish (franchisees) swimming around. Information flowed from the contractors to the corporation, and my job as technical director was to get it back out to the contractors.” As Bomanite tech director, DeAngelis oversaw workshops where new tooling, materials and techniques were shared with franchisee contractors.

He cites advances in concrete mix design as an example of the flow of intelligence from the field, derived from the real-world laboratory of first-hand experience and experimentation. “Aggregates, ratio of sand and cement, additives, a lot of this was brought into the corporation from contractors.

“What made it all successful was really the licensee network,” DeAngelis says. “And the Bomanite International Society, the organization of contractors that assisted Bomanite Corp. in making the right moves. The advisory board of the society brought problems and concerns — and opportunities — to the corporation.”

Starting the revolution
Now named The Bomanite Co., the “ornamented concrete” enterprise of the ’70s remains a major player in the decorative-concrete industry.

“The founders created a great company that continues to operate today with licensed contractors throughout the U.S. and Canada, some of which have been with Bomanite for more than 35 years. The network of qualified, creative licensees is what sets us apart, makes us unique and provides innovation,” says Russ Ingersoll, president of Bomanite.

Bomanite “really began the industry,” Sieben says. “Before that, you’d see some coloring and exposed aggregate with flatwork as the only architectural things being done with concrete. And maybe a little bit of scoring. Those were the only tools the landscape architect had in his quiver.

“What Bomanite brought was a new design tool for landscape architects. It allowed architects to work with shape, color, design and texture.”

Early on, there was skepticism about turning concrete into “cheap cobblestone or cheap tile,” but as time went along, designers and concrete contractors realized they really had a creative design tool. And techniques developed in one place were shared with others around the world. It was not just about the lowest bidder getting the job, it was concrete and a contractor with a new design tool.

But without the right hands using this tool, “ornamented concrete” would not succeed, Sieben says. Bomanite or any other tool or color supplier could provide the means, but the craftsman had to make it work, formulating the right mix, the right pour duration, and other application details and techniques. 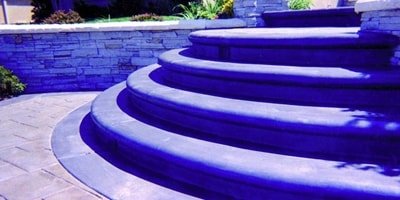 Concrete steps can be the centerpiece of a house's façade and a showpiece of the decorative concrete craft. 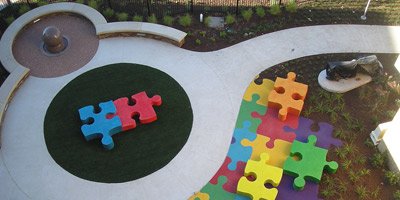