Concrete Overlay is a Big Part of College's New Design

Eugene, Oregon, is perhaps best known for being the home of the University of Oregon and its Ducks football team, but UO’s not the only game in town. Lane Community College — or Lane for short — is the third-largest community college in the state with a total annual enrollment of more than 36,000 students. Lane’s campus succeeded the Eugene Technical-Vocational School that was founded in 1938. Lane itself was founded in 1964 by a vote of local citizens, and the main campus opened in 1968.

The core of the main campus, called the Center Building, was constructed more than 50 years ago. Today, most of the Center Building is history as it was redesigned and much of it replaced with a new modern structure. That structure, which plays a large role in the college’s new look, features a concrete overlay by CTS Cement Manufacturing Corp.

Plans called for 22,000 square feet of flooring on two floors to be topped with Rapid Set Tru PC by CTS Cement. Albany, Oregon’s ModernCrete was selected to install the floor, and began work in June 2015 after classes ended for the main academic year. 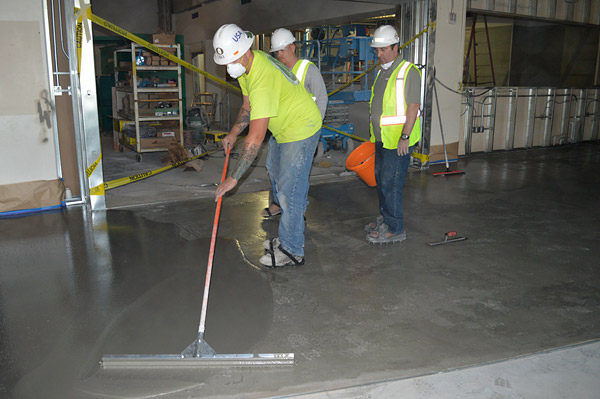 Tru PC debuts
At World of Concrete 2015, CTS Cement Manufacturing introduced Rapid Set Tru PC, a new product that can quickly and easily simulate the appearance of polished concrete without the time and cost of installing a new concrete floor.

“Tru PC is an advanced, professional-grade, low-polymer hydraulic cement-based, self-leveling topping,” says Joe Zingale, flooring group specialist at CTS Cement. “The new gray Tru PC is specifically designed for the look of polished flooring. We have loaded the Tru PC with some of the finest aggregates plus have a larger broadcast aggregate available. It’s harder and has more abrasive resistance than our original Tru product.”

Demolition of the Center Building commenced in December 2013, and ModernCrete began talks and planning with the college in November 2014. The original floor was covered with bricks embedded so deeply they would have been very difficult to remove. Originally, the college was going to have a different contractor install tile but ModernCrete proposed the overlay. The company knew it would provide the polished concrete look the school wanted for close to the same amount of money as the tile.

Eli Cronin, operations manager for the Lane job, says the company’s estimator suggested the Tru PC product to the college as an alternative to tile. “It has many of the same benefits of polished concrete and with this the college won’t have to maintain tile,” Cronin says. 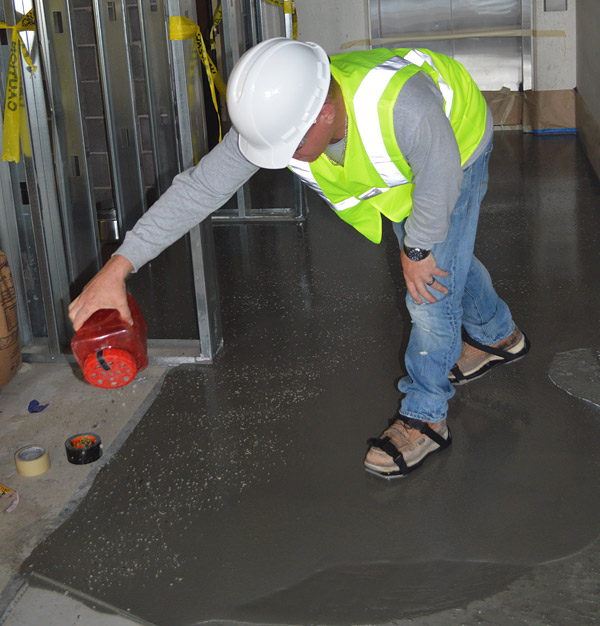 CLASS takes center stage
Over the decades since Lane’s Center Building was constructed, the campus has grown drastically in both size and student population. The building’s function, however, has remained more or less the same. It is home to the school’s cafeteria and culinary arts program, study spaces, the library and bookstore. The building as a whole needed to be modernized and updated to meet the needs of 21st century students.

The finished building — now known as CLASS, or Center for Learning and Student Success — is built to LEED Silver certification standards. Eugene-based Pivot Architecture developed the building design, which called for a learning commons with resources for students, improved food service facilities, a more user-friendly and accessible bookstore, and an open plaza.

The floor design called for the natural color of the Tru PC material along with Ameripolish Platinum color poured in with the overlay and 16-gauge zinc strips. The strips are installed in a wavy pattern loosely following the elevation lines on the topographic map of the building’s lot.

The entire building project, which encompasses both remodeled and new space, totals 106,222 gross square feet. The ModernCrete crew, who had to work around numerous other trades in the building, completed the work in three stages, beginning with a mock-up upstairs. “We tortured the overlay and it held up,” says Cronin. “We had trouble removing it from the floor when they wanted us to get it out.” 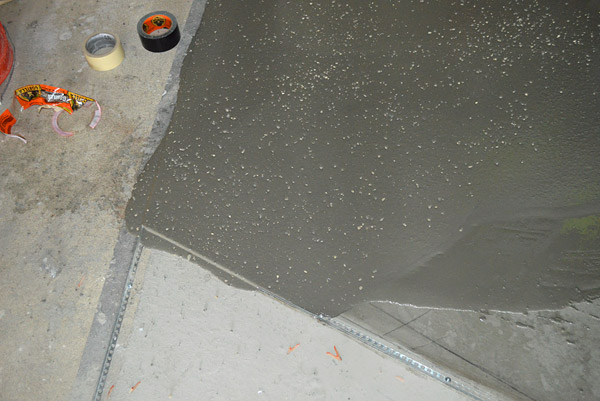 Staying Tru
Cronin’s crew applied Rapid Set’s TXP Epoxy Primer followed by Rapid Set LevelFlor, a hydraulic cement-based self-leveling underlayment suitable for use both indoor and out. The LevelFlor filled low spots and corrected unevenness prior to the installation of the rest of the system. The Tru PC was applied at a thickness of 3/8 inch, followed by Rapid Set Acrylic Primer. Tru PC Broadcast Aggregate in 3/16 to 1/4 inch was broadcasted into the wet Tru PC, and zinc strips were placed throughout the floor. The floor was ground and polished to 800 grit.

Chris Bishops with DecoPrep Surface Solutions & Rental Supply, of Austin, Texas, provided the Tru PC, LevelFlor, primers and Tru PC Broadcast Aggregate for the job. Since the first introduction of Tru PC, some small changes have been made to the formulation, including more aggregate added to the bag. 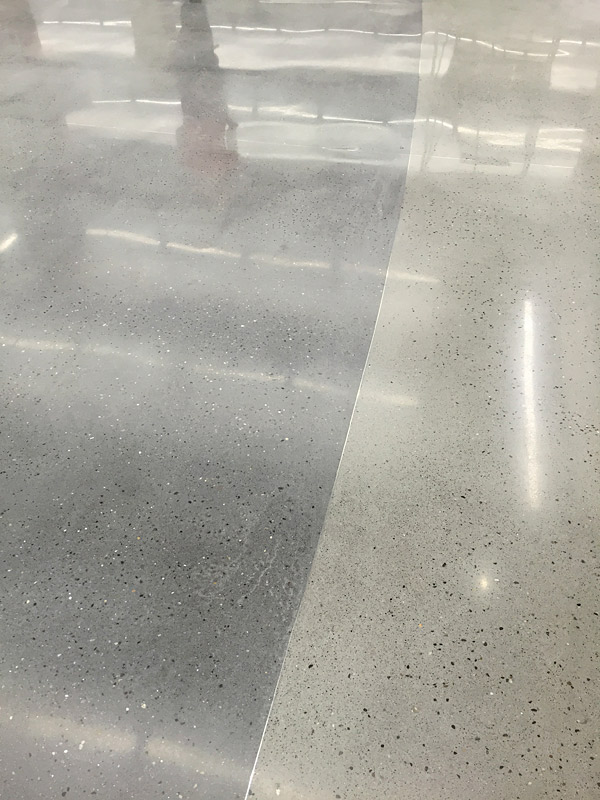 “Once we selected the aggregate for the Tru PC, the challenging part was trying to keep the Tru PC’s price point close to our Tru product,” explains Zingale. “Shipping this aggregate to our bagging facilities is expensive. Our beginning formulation polished extremely well, but wasn’t as user-friendly as our present Tru PC. We did increase the size of the bag and having it gray does offset some of the bag price.”

The product, not including the Tru PC Broadcast Aggregate, was also installed on a 32,000-square-foot Home Depot expansion project in Falls Church, Virginia, with excellent results. The largest job previously using Tru PC was about 5,000 square feet.

“The school wanted a concrete look and the Tru PC has the look of concrete,” says Zingale. “They reviewed both the Tru and the Tru PC, and the Tru PC looks more like concrete because it has very similar aggregates. Creating that look by broadcasting our Tru PC aggregate into the Tru would have been a real challenge for the contractor.”

Once the main 6,000 square feet of the floor at Lane was finished, it was covered up to protect it from the other trades. The ModernCrete crew then moved on to a smaller portion of the ground floor before repeating the process on the second level. One of the challenges was working around dozens of other people and getting enough workable open-floor space. “There was up to 120 people working in this job site,” says Cronin. “It was crazy.”

The floor was finished long before the other trades completed their work. The finished building was revealed just before the new school year commennced Sept. 28.

Most challenging aspect: Construction needed to be completed before the building opened to students at the start of the school year. Numerous other trades also shared the space. Work had to be done in phases so the floor could be covered up to allow for other work to proceed. 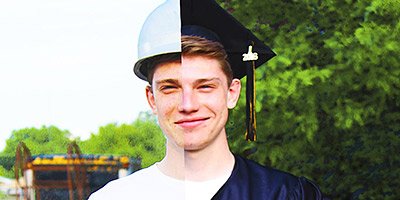