This year’s WOW! Award for the best overall project went to Baker Concrete Construction in Fort Lauderdale for the University of South Florida’s Polytechnic 555 Building on the campus of Florida Polytechnic University in Lakeland, Florida (pictured above). The building, an elliptical-shaped structure highlighted with exposed concrete raker portals, impressed the judges and audience alike with its design by Santiago Calatrava and Festina Lente.

The first part of the facility to be built were its retaining walls — complete with integral concrete seating caps — which beautifully define the building’s perimeter from the reflection ponds. All total, the walls measure a mile long.

The main building’s architectural concrete features 142 column portals spaced at 8 feet on center in a curving layout, framing the long hallway and supporting the building perimeter’s second story. The shapely portals had to be braced with triangular-shaped, self-consolidating concrete monolithically poured every two columns. After the columns were built, the second-level elevated beams and slabs were completed and followed by ground-level polished concrete floors.

The two main entrances began with perimeter architectural concrete columns connecting to each of the 16 unique raker portals. These portals support the roof and tie into an oval concrete skylight that illuminates the grand entry’s polished concrete stairs.

Many are calling this building a modern architectural marvel. It was named the 2015 Global Project of the Year by ENR Magazine.

This year’s competition was judged by Clark Branum of Diamatic USA, Bob Harris of Structural Services Inc., Tanya Komas of the Concrete Preservation Institute and Todd Scharich of the American Society of Concrete Contractors. Scharich also served as the emcee during the event’s ceremony.

The Decorative Concrete Council is composed of contractors, manufacturers and suppliers of decorative concrete products. DCC is dedicated to improving the technical and business expertise of contractors who pursue this specialty market.

The California city wanted a functional, decorative element to enhance its “old town” feel. Penick delivered a stunning project with Bomanite’s Ashlar Slate and Boardwalk patterns, the latter of which mimics the look and texture of wood.

Texas Bomanite completed 21,725 square feet of concrete polished to a 1,500 grit finish. Judges were impressed at the magnitude of the project and the delineation of color. Seen here is a floor dyed with Bomanite Pineapple.

On the second floor of the famous Roy Acuff Building in Nashville, multiple dyes and an engraved pattern that matches an exterior wall help mask a major crack traveling through the studio’s main lobby. The floors were polished to an 800 grit and burnished to a 1,500 grit.

This project involved a failed, exposed aggregate deck and bluestone coping that couldn’t be removed. The solution included working the bluestone color into an oversized quarry block pattern and subtly staining alternate tiles in varying tones.

An Australian shoe store, which reportedly had a floor with “more rolls than a Thanksgiving dinner,” was outfitted with a ramped entry floor that minimized materials and saved the client nearly $10,000. The end result was a rapid-curing floor featuring a French Grey polished overlay with river pebble aggregate.

Biloxi A three-color, classic texture pool deck is the centerpiece of the Gulf Coast’s newest hotel in Biloxi, Mississippi. The Golden Nugget, which also features a 17,500-square-foot casino floor, was completed in time for the grand opening despite plan changes and weather delays.

The owners, both veterinarians, wanted a beautiful floor that would mirror the beams on the home’s ceiling but be durable enough to withstand their many animals. Hyde broadcast patterns of shake-on color into a textured overlay and then acid stained and sealed the floor. The judges like everything about this project.

With its twists and contorts, Stealth gleams like steel in Atlanta’s art district. The impressive concrete sculpture’s formwork was modeled in Rhino Software down to the bolt level and then created with a five-axis CNC router. Each individually numbered piece was built from three layers of 1/4 inch bent marine-grade plywood. The plywood face was sanded and filled with gypsum, then sealed and coated with urethane to create the smooth surface.

Transporting specialty supplies 4,000 miles and mixing 300 pails of color into three different blends were among the challenges involved with this project. The Aruba home’s 16,000 square feet of interior and exterior concrete was made from a 5,000 PSI mix designed to withstand extreme weather conditions. Extra cracking precautions also had to be in place because the architect’s design called for few expansion joints.

Trademark Concrete used EcoCast paving in varying colors, some seeded with black granite walkways, seating and borders in the 72,000-square-foot courtyard of the Kaiser medical campus.

Whereas the original design called for a 14-foot wall of stacked sandstone, the city park in Denver ended up with GFRC rock panels that better mimicked the desired Colorado terrain. The judges called the coloring “astonishing.”

Architectural concrete included seat walls, 142 column portals spaced 8 feet on center in a curved layout and two main entrances with perimeter columns connecting to each of the 16 raker portals.

Concrete elements in a 7,000-square-foot outdoor teaching space included cast-in-place radius amphitheater seating, sub-slabs for flagstone and dry riverbed paving, meandering walkways, two basketball courts, a table and sandblasted vertical surfaces. The judges were impressed with the cleanness and crispness of each piece.

Out of four entries, this video seen at https://vimeo.com/125967067 speaks for itself. The judges said it illustrates just some of the amazing possibilities of decorative concrete.

The client needed a way to access a newly constructed guest house from the main home but had to figure out how to get through a 300-year-old tree root mass. Solutions were further narrowed as the home was on an island, inaccessible to a ready-mix truck and not viable for a line pump option. In the end, the contractor cast one landing per day — each independent from the other — working from the bottom to the top. 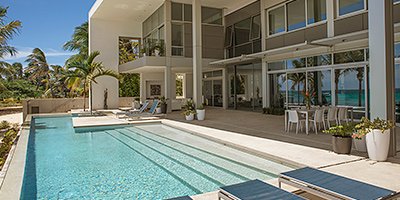 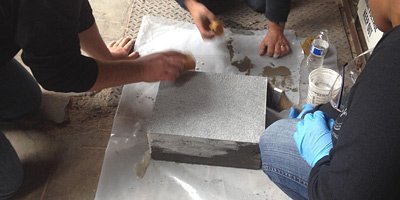