Innsbruck architect Daniel Fügenschuh, who is friends with Rudi Tutz, the owner of the apartment block, was commissioned by him to extend the top-floor apartment of the building, located in a historic residential neighborhood of the western Austrian state of Tyrol. “Rudi is a friend of mine,” says Fügenschuh. “He has seen a few of my projects and liked them more than the ones he had seen that were done by other architects.”

Tutz is a professional flutist with a business of making and restoring flutes. The building has been passed down through several generations of his family. Tutz previously lived on the top floor of the building in a tiny flat of only about 743 square feet (69 square meters). The extension gave him much-needed living space and took advantage of the stunning views of the surrounding city, which lies in a valley between two mountain ranges about half way between Munich, Germany, and Verona, Italy.

The building has been a residence since 1900. Prior to Tutz’s moving in, the loft was vacant. “People used it for storage or to hang the washing,” says Fügenschuh. Construction was done 66 feet (20 meters) above ground. “It’s a very restrained neighborhood with street widths of 3 to 6 meters (10 to 20 feet) so the process was not easy,” says Fügenschuh. “We had very limited space to lift the prefabricated elements. To construct in situ was not an option because of the residents on the lower levels.” 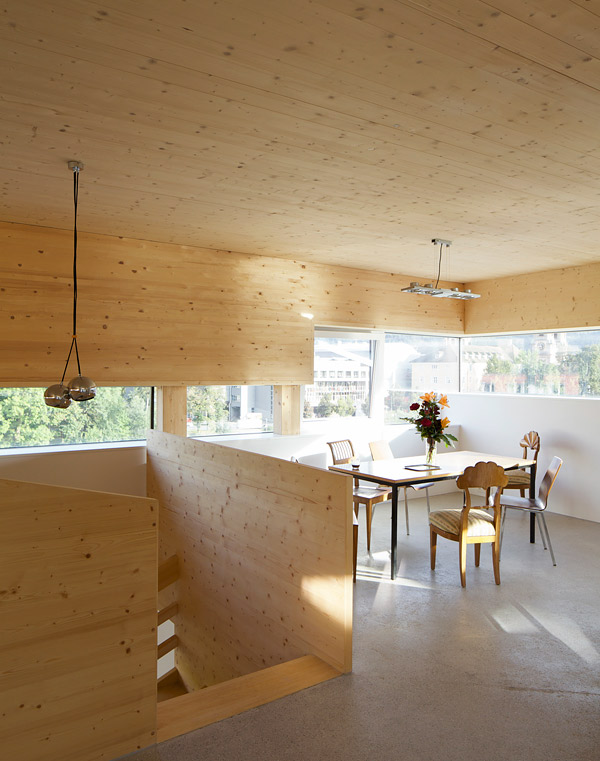 The new extension is 1,658 square feet (154 square meters) including the existing part on the lower level. The loft provides an extra bedroom and living room and includes a 430-square-foot (40-square-meter) terrace. Precast was chosen as the construction material given the site limitations and the historic nature of the building, which was already covered in a light yellow lime plaster.

“The house was already higher than the neighbors,” the architect says. “We wanted to preserve the heritage of the building by keeping the new addition slick and modern and by choosing concrete, a similar material to the original rendered facade.”

The extension is constructed of nine precast panels that are mostly 15 feet long by 4 1/2 feet high and 5 1/2 inches thick. The biggest is 23 feet long by 6 1/2 feet high. The panels were mounted on a massive wood structure following the same lines as the original building. A narrow band of glazing visually separates the original and new sections. The extension is connected to the lower floor of the apartment by a wood staircase.

This loft is just one of several modern construction projects taking place in and around this city by architect Fügenschuh and others. He believes that modern concrete construction does have a place in this historic landscape. “It can fit in very well if it feels right,” he says.

Scope of project: A large extension constructed of nine precast panels was mounted atop a historic apartment building Most challenging aspect: Construction was done 66 feet (20 meters) above ground in a neighborhood with street widths of only 10 to 20 feet (3 to 6 meters). 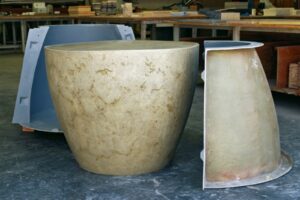