A floor at an Alaskan elementary school honored the natural environment and became art that kids can walk on, thanks to Mapei’s Ultratop PC polishable concrete topping.

Girdwood, Alaska, 36 miles southeast of Anchorage, is a picturesque year-around resort town with a five-star skiing mountain, Alyeska, in its backyard. In 2015, Girdwood Elementary School was renovated to expand and modernize the original school built in 1982. To meet a state mandate that 1 percent of the school’s renovation budget be earmarked for public artwork, the school commissioned three artists, including Anchorage artist Sheila Wyne.

Capturing the outside inside
Wyne incorporated the beauty of Alaska’s natural environment by adding color and texture to the floor through scenes depicting the interplay of sunlight and the topography of the sand flats of Turnagain Arm, a branch of Cook Inlet which progressively narrows and is prone to extreme tidal changes.

Greg Hutchins with Anchorage-based Performa Inc. managed the 7,000-square-foot project. He says his team put in about 80 hours of testing and mockups before settling on Ultratop. “We’ve used Mapei products before and Ultratop seemed to be the best for polishing,” he says. Even though it’s a little harder to grind, “It’s a little bit easier to pour and its consistency eliminates a lot of air.”

Hutchins says with some products, grinding down to 3/8 inch and working quickly sometimes uncovers encapsulated air. However, Ultratop didn’t expose encapsulated air, which eliminated the need to grout and fill.

‘Ebb and Flow’
Wyne’s installation, “Ebb and Flow,” evokes the beauty of Turnagain Flats, where strong tides leave multicolor striations of sand, transparent bubbles and ever-changing reflections of sunlight on the rippled contour of the beach. Wyne calls the flats “one of nature’s floors that appears with subtle changes twice a day.”

In her artist statement, she writes, “There are moments within the tidal changes when the water recedes but there is still a shimmer and a texture — like glass marbles — on the surface of the flats.”

Wyne used several different colors and more than 700 randomly shaped pieces of aluminum to create the reflections, texture and color gradations she wanted. Using high-pressure water jets, she cut pieces of 1/4-inch aluminum sheet stock to resemble bubbles, and used 1/2-inch aluminum strips anchored with an epoxy gel in curved patterns to replicate striations in the sand flats. She, Dault and Dobson then hand-placed and epoxy-anchored the snowshoe prints, animal tracks and “bubble” circles to the slab.

Hutchins says he was amazed at how well Wyne projected her vision onto the floor, admitting he initially had his doubts. “I questioned it at first,” he says, when he saw the waves beginning to take shape. “I asked her if she was sure she wanted these colors and these embeds because once we get this stuff stained there’s no going back!

“When I walked in and actually saw it all cleaned up and the light was just right I said, ‘Wow, I can visualize that out in the inlet.’ In just the right light you would see that reflection across the bay. She did a phenomenal job.”

For Hutchins, one challenge was working around 11 subs on a floor that took up so much space. It required skill to polish both concrete and aluminum — vastly different in hardness — and to blend stain and dyes to achieve the artist’s required color nuances.

Finessing the finish
Grinding the aluminum and concrete topping presented a challenge because the aluminum grinding created a black film over the surface of the Ultratop. “We had to clean the black film off completely the right way or else it would ruin the whole look of the project,” he recalls.

Wyne had to install more than 700 pieces of the aluminum embeds before the top layer of concrete was poured. The team chose acetone-based colors in turquoise, forest green, gold, dark green and blue by Ameripolish. The stains were applied, scrubbed and cleaned, then the process was repeated a second time. After the stains were dry, Ameripolish 3D, a lithium densifier, was applied to lock in the color.

The team used Mapei Planibond EBA, a 100 percent solid epoxy primer with 16-grit silica broadcast into it. Hutchins says the primer provided a highly profiled surface for the Ultratop PC to bond to. Mapecem Quickpatch was used to fill some dips to maintain an ultra-flat surface.

The final steps involved diamond polishing followed by a coat of Ameripolish 3D SP sealer. A second coat of sealer was applied and the floor was burnished by a large buffer to create the final shine that topped off a remarkable Alaskan showcase project.

Scope of project: 7,000 square feet of flooring in a newly expanded elementary school. Artwork was commissioned by three artists to evoke the natural environment of Girdwood through replicating tidal flats and animal tracks throughout the floor.

Most challenging aspect: More than 700 pieces of water jet-cut aluminum needed to be epoxied into place before the final concrete could be placed. The aluminum grinding created a black film that had to be properly cleaned off. Eleven subcontractors shared the space. 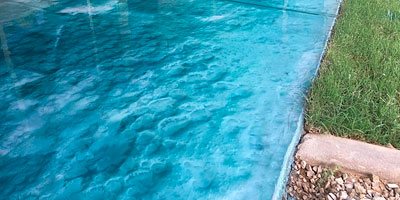 Colorful mica pigments designed to be dispersed in a variety of binders are part of what makes metallic epoxy floors so alluring. 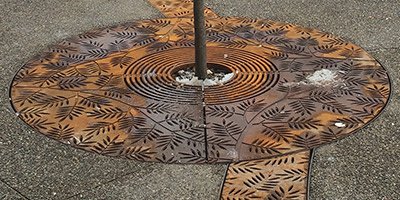 Let’s say you’re part of a design and construction team that has settled on a stunning look for a high-profile exterior concrete project — the entry to a corporate office, a monument to fallen heroes or maybe a creatively upgraded pedestrian walkway for a downtown shopping district.

How to Choose a Concrete Casting Surface 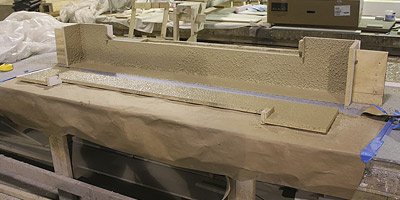 oncrete does exactly what you ask it to. Problems with casting concrete do not arise from the concrete acting up. Problems arise when we don’t understand what we are asking for. With concrete, watch out what you ask for because you may just get it.