Ohio State University experienced a growth spurt this past summer with campus-wide new construction and renovations that continued well into 2016. As part of the university’s largest design-build project to date, ICC Safety Surfaces was brought in to stain and polish more than 20,000 square feet of concrete flooring.

Chris Duger, owner of Columbus, Ohio’s ICC Safety Surfaces, specializes in flooring. “We do a lot of food and beverage manufacturing facilities,” he says. “That’s probably 50 percent of our work,” with the other half comprising polished, decorative and stained concrete.

ICC Safety Surfaces was brought onboard because other companies were unwilling to get involved in the “paper trail-oriented” process of working with a university. “It can be a big headache,” Duger says. “We actually walked away from some of the bigger flooring jobs because of it and they came back to us and told us they really wanted us to bid. There are not a lot of contractors around here who can do the type of work we’re doing.”

Sometimes bigger is better
The company has the expertise and all the large-scale equipment necessary to polish and stain large areas. This work took place in two buildings noted on the plans as Building H, with 4,000 square feet of polished concrete coated with Prosoco’s LS and Polish Guard, and Building J, with 16,000 square feet and a multicolored floor. The two structures are part of OSU’s North Residential District building projects, which aim to improve and expand living environments and facilities throughout campus. Infrastructure work on the buildings began in 2014 and continued throughout the 2015 academic year. Duger’s work began in March 2015 and was completed in July.

The second building that was completed, Building J, contains a dining hall and office spaces. The dining hall was spec’d to have a large swath of the floor covered in half-circular designs stained with four different colors of Prosoco water-based GemTone in Antique Cork, Bronze, Dark Brown and Red Rock.

Building J also has three stairwells with about 75 steps each that all had to be polished with hand-held grinders. “That was time-consuming,” Duger says, “but that’s the only way we could do it.” 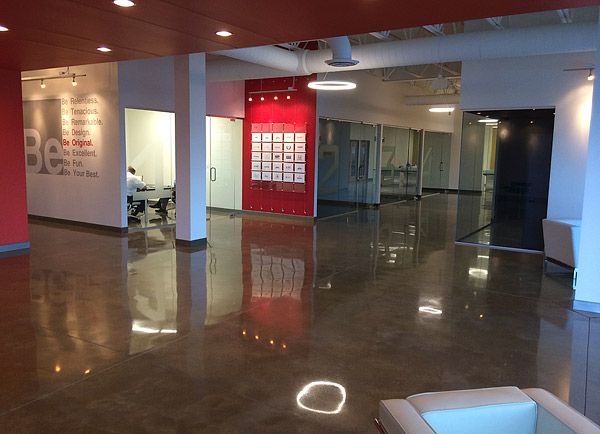 Overcoming challenges
There were other challenges, including damage to the floor from other trades working on it, but the most challenging was laying out the design. “Everything’s based off of a radius,” Duger explains, “and if we would have laid out the design when the building was originally built it would have been easier. When you’ve got all the construction materials and equipment and everything in the way you can’t really find a radius point and pull from that one single point throughout to get your design.”

The crew took PVC pipe and bent it to get their radiuses. They also had to tape off every color and cover it with plastic before spraying the GemTone stain and densifying before moving on to the next color.

The floors were polished using 40-, 80- and 150-grit metals, then 50-, 100-, 200-, 400-, 800- and 1500-grit resins. The joints separating each color were filled with black Spal-Pro RS 88 semi-rigid polyurea joint filler from Metzger/McGuire that was shaved down with a razor scraper before grinding up to 400 grit. The floor was stained with Ameripolish Classic Dye in black before it was densified with Prosoco’s Consolideck LSGuard and polished up to 1,500. “Then we used Prosoco’s Consolideck PolishGuard and burnished it,” he says.

The Ameripolish solvent-based stain was chosen to get a more true black as opposed to a bluish-black that the designers wanted. “If you know anything about Ohio State . . . they don’t put blue anywhere,” laughs Duger.

The specialized crew cut all the transition colors with an Engrave-A-Crete Mongoose concrete engraving saw. They used Metzger/McGuire’s Rapid Refloor polyurea/polyurethane hybrid filler to repair small surface defects. Because of the four different colors in the decorative radiuses, whenever a pipe dropped and left a ding, the Rapid Refloor filler had to be prepared in a matching color.

“One big challenge has been getting the floor space to work on without anybody else on it, and there’s damage that happens,” Duger says. “You have to use these different colors of Rapid Refloor to match the multitude of stains because you have to go through and do that filling process first. I’ve got a specific crew of guys that are highly skilled and talented and the job came out beautiful.” 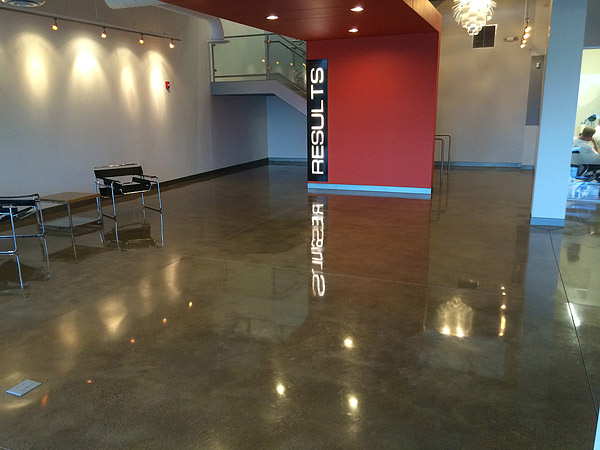 Duger, a painter by trade, graduated from OSU with an economics degree before forming Industrial Coatings Corp. in 1996. He and his wife formed ICC Safety Surfaces and have been producing stained and epoxy floors since 2004. He’s seen the market change substantially since then, and says the industry is moving toward dyeing floors with stains and polishing them which, he adds, is keeping his “great group of guys busy.”

Most challenging aspect: Fixing floor dings from other trades meant matching the color of the Rapid Refloor to the colors that were spec’d for the floor design, which involved several half-circles and semi-circular designs over a large swatch of floor. Hand polishing three stairwells of about 75 steps per stairwell was time consuming. 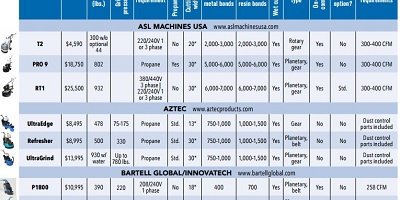 Know your business and you’ll know what kind of equipment fits your needs. Find the information you need to know in Concrete Decor's Polishing & Grinding Specification Report.

How to Make Maintenance Work for You to Increase Profitability 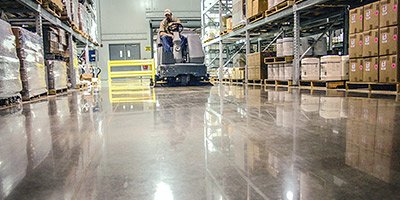