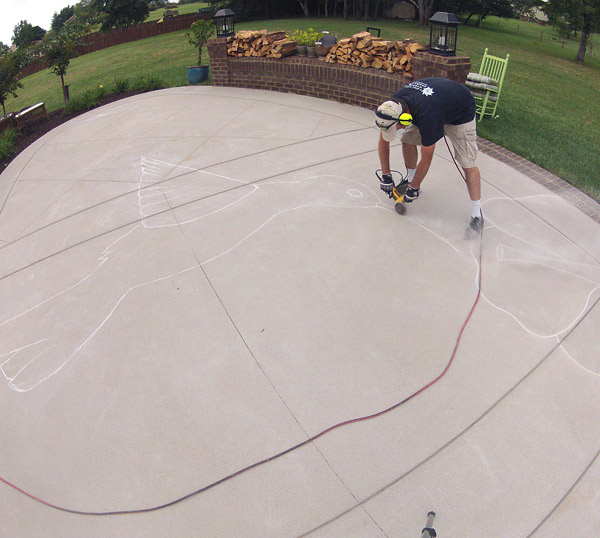 Cary Grant — the Las Vegas decorative-concrete impresario, not the Hollywood movie icon — has crafted dramatic masterpieces through his company, Floor Seasons, that could be considered Oscar-worthy, if there was a decorative concrete category.

Likewise, Rick Lobdell, owner of Concrete Mystique in Nashville, has produced his share of award-winning art. He’s an artist, first and foremost, with a master’s in art to prove it. “I’m a concrete artist, not a decorative concrete contractor,” says Lobdell.

Though Grant and Lobdell are about as geographically far apart as they can get, both share a common pursuit and an integral skill set — decorative concrete artistry and deft use of concrete saws as an important tool in the creation of their signature works of art.

A saw in the hands
Lobdell, a classically trained artist, studied art the old-school way: he learned how to paint with a brush, palette and canvas. Since the starving-artist lifestyle wasn’t his calling, he began a career in the construction industry which incorporated his artistic talents. Some 12 years ago, he went to work for Concrete Mystique and acquired the business three years later.

“I hand draw everything I work on. I don’t think stencils are necessary for what I do as an artist,” he says, about plotting and cutting joint lines — or as he calls them, engraved lines.

Lobdell describes a collaboration with illustrator John Campbell on an interior residential entryway featuring an elegant stained floor with a fountain/pool image at the center. Campbell’s contribution was the realism and detail reflected in this central feature.

The first day, Lobdell drew lattice tile and two wrought iron-like vines using chalk-like soapstone. Then he engraved lines to separate the art elements and the background using an angle saw, a must-have in his toolbox, and a specialty cutting tool, the Cobra from Engrave-A-Crete. The latter was used for straight lines.

After painting the lattice and vine design, he returned the next day to regrind with the angle saw and apply a clear sealer. “When I do interiors, I do serious coatings to protect them,” Lobdell says. “It’s artwork and I want it to be around a long time.”

Next up is a residential patio featuring a vine and leaf pattern. Lobdell sketched the design on site, drew it on the surface and engraved the lines, all in one day. For color variation, he used different concentrations of a black acid stain and applied it with artists’ brushes. When he was done staining, he neutralized and power-washed the surface. The next day, he recut all the joint lines. But no grout for him. 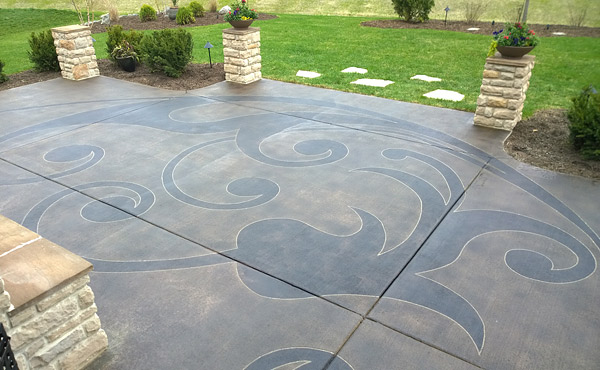 “I like the white lines,” he says, and regularly uses a wider blade, 3/8 inch thick. This produces the highly visible, light-colored lines in his decorative work.

He also likes math. “Basic algebra and geometry, nothing crazy, are extremely important on many of my projects,” Lobdell says. “It’s very rare when I don’t use math,” especially considering his essential tools are a straight edge, tape measure and a square. “I use math to create layout and designs in my compositions. It’s what makes my process so efficient.”

On his free-form projects, usually involving vine and leaf patterns, math doesn’t play as large a role. “It’s more about understanding how to lay out a space. Everything becomes asymmetrical which makes math harder or less important. In this case I no longer need the Cobra to cut straight lines because there are none. Instead I am doing everything with my DeWalt angle grinder with the wider blade. I just follow my lines as close as possible,” he says.

“When I am using my angle grinder, I feel a sense of freedom as if I am carving my design more than just engraving it.”

Lobdell notes on these free-form projects, it’s important to have a strong lower back, a good base to stand balanced, and an intent focus on cutting the surface. “Sometimes surfaces are really soft and I have to lightly touch it. Other times, the concrete is incredibly hard and I have to push fairly hard into the concrete to create my line.” The most important thing is to follow your drawing.

Projects that revolve around cutting curves with his angle grinder are quicker to complete, Lobdell says. “Straight lines with lots of math and the Cobra slow me down because it takes a lot more concentration to break down a complex design” before engraving, he says. “Starting and stopping lines takes a lot of focus.”

Above all, take your time and practice honing your saw-cutting skills. “You have to be careful and calculating. Starting out, I took my time, since you only get one shot at it. Of course you make mistakes. When I train others, I don’t expect them to be as fast as me.”

Lobdell started out a dozen years ago doing basic design patterns, then graduated to more complex images and designs. “As I got more confident, the designs got more complicated.”

The design was based on a pattern found on an area rug elsewhere in the home.

One is a lobby/waiting room of a high-end auto-detailing shop, where a concrete floor was colored with an acid stain and a solvent-based dye. For the curvilinear joints separating acid-stained from dyed areas, Grant used thin-gauge PVC pipe bent into arcs. This pipe was then used to trace lines in the floor.

“There’s no way to do a 40-foot arc without plotting it out” to get the geometry right, he says. He used a DeWalt angle saw and masonry blade to cut the joints.

This technique for plotting and cutting the curvilinear joints is a low-cost alternative to using an advanced saw that Grant didn’t own years ago, when this project was installed. Today a concrete engraving saw such as Engrave-A-Crete’s Mongoose, which he concedes is “pricey” for a contractor starting out, is well worth the investment.

Another project was a foyer in a learning center where Floor Seasons created a detailed pattern of “swirly” filigree set into a dark acid-stained floor. Again, PVC pipe formed the large, sweeping arcs. For the “leaves” and more intricate swirling branches, he traced the joint lines of custom-made metal templates onto the surface, followed by an angle saw. The art elements were grouted and painstakingly sealed with a small chip brush.

A third Floor Seasons project involved the skills of a tattoo artist who helped create an intricate dragon figure. The artist first drew chalk lines, followed by pencil for the final design (chalk would blow away during cutting). For such detailed work — slowly and methodically cutting numerous pencil lines — Grant used a 4-inch DeWalt blade.

Grant’s last example involves a highly stylized, multicolor Chicano character for a Mexican restaurant. For this complex project, custom-made vinyl stencils made from a customer-supplied PDF file were the only real option.

Grant laid out vinyl-patterned sheets with black lines to separate colors, and cut the joint lines through the lines in the vinyl with an angle saw. The design was hand-painted with a small chip brush, sealed, grouted and sealed again. The grout cleans up the art, he says, covering spots in the joint line where some color may have “rolled in.” The results are clean lines with no ragged edges.

Lessons learned
Cary Grant passes along some sage advice from his journal of trial and errors:

- If possible, make cuts before walls are in place. This makes the job along the edges more manageable.

- Limit periods of cutting to 15 to 20 minutes, and switch blades or take a break. This kind of cutting produces “a lot of heat, and wear and tear on the saw.” Don‘t rush.

- Practice is essential. When he started out in the decorative trade, he practiced making circles, horse’s heads, letters and other images on surfaces that were later covered with carpeting or other flooring materials.

- Sell the client on the color and design features of the project, but avoid using colored joints as they have to be hand-painted and sealed. Instead, use grout in any color. If a client insists on hand-colored joints, charge accordingly. Typically, a steep premium will nip this idea in the bud.

- Ensure all saw-cut lines touch so there’s no interruption in the joint line.

- Don’t apply sealer outside the saw-cut joint lines or the stain applied later won’t penetrate properly. The sealer must be first ground off.

- Metal templates can be reused many times, while vinyl ones are used once.

- Don’t include cut circular patterns smaller than a soda can in diameter. Tools that can cut smaller circles are difficult to use and not always precise.

- Remember, you can’t erase a saw-cut line to fix it. 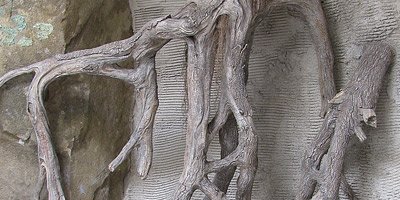 In the world of theming, epoxy is still an underutilized tool for creating levels of detail and realism second to none. For example, Polygem Inc. has spent years developing its 307 series of epoxy among others that are custom-formulated for this exact type of work.

A Man Cave with Water Features and Carved Concrete 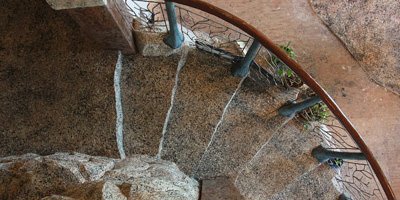 Their still-in-progress project includes a number of concrete features inside the home, the centerpiece being a cast-in-place, carved, stamped GFRC staircase that resembles rock and leads into the basement-level man cave, graced by a sun-and-clouds water feature on the wall next to the staircase. 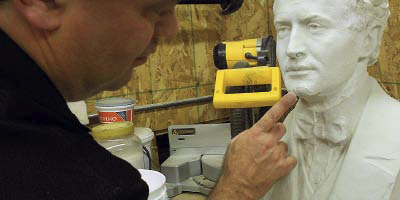 A How To feature that offers step-by-step instructions for casting statuary and other fine-featured pieces.