About 15 years ago while Robin Brailsford was installing public art mosaics at the Ed Pastor Transit Mall in Phoenix, her body screamed there had to be a better way to create vast mosaics in the ground. Her brain listened.

“It was back-breaking work,” says the owner of Brailsford Public Art in San Diego about placing colored aggregate piece by piece into wet concrete on a job site. She was working with Shaw & Sons’ Lithocrete system which incorporates a means to create a scattered aggregate pattern on a concrete surface. In a eureka moment, she realized she could amend that process to premake a mosaic design or pattern in the controlled confines of her studio, away from the ever-present construction boss breathing down her neck to hurry up. She could then install the finished unit efficiently on site.

Her system involves gluing porcelain, glass or stone tiles onto mesh in a predetermined design. “So instead of putting down say 20,000 pieces individually and in a rush at a job site, with lots of room for error, we’re putting down large sections of mesh with the mosaic design preapproved and attached,” says Brailsford, who has been creating public art for more than 30 years. “The art is delivered to the contractor, on site, with all the pieces glued in place.”

Brailsford and Lee and Ron Shaw of Shaw & Sons have patented the process and call it LithoMosaic. “Artists have the luxury of studio time and supplies to make something they know is real art,” she says, and clients can request adjustments before anything becomes permanent. A cadre of about a dozen artists currently work with LithoMosaics, “and we’re always looking for more.”

Contractors licensed to install Lithocrete can also install LithoMosaics, Brailsford says. The system involves special tools and a special mix because of the propensity of an alkali-silica reaction with the LithoMosaic components.

Maintenance is easy, she adds as “A LithoMosaic is much less permeable than regular concrete. Spills don’t sink in or stain the artwork.” LithoMosaics may also contribute to a project’s LEED certification depending on what they are made from.

To install a LithoMosaic, the contractor positions the artwork mesh side up (tile side down) onto the wet concrete and then trowels it in. “The cream in the concrete releases the glue and sets the tiles,” Brailsford explains. The mesh is then pulled off and all the tiles are in place. The process is quick. “We are in and out in a day.”

Brailsford estimates there are 50+ LithoMosaics installed around the country, with most along the western seaboard and across the Southwest and Southeast. Currently, there aren’t any LithoMosaics in the Northeast, as well as no licensees in that part of the country. She blames this on a misconception that LithoMosaics won’t stand up to the freeze/thaw cycles prevalent in that region.

“Regular mosaics are only found in Mediterranean climates, as the tiles will pop and spall when water seeps between the tile and mortar. That’s not an issue with ours,” she says. “Anywhere you can put regular concrete you can put a LithoMosaic.” In fact, she adds, one of the best reviews she’s gotten about an installation is from clients in Fairbanks, Alaska, who report the art is still perfect after five years.

When it comes to LithoMosaics, Brailsford says, the bigger the better. “These aren’t meant for residential projects,” she says. “But rather for jobs like transit malls and parks. That’s where we excel.”

In the San Diego area, there are many LithoMosaics to visit, including:

At the front entry plaza of the North Island Credit Union headquarters in Kearny Mesa, there’s a 20 foot in diameter LithoMosaic designed by artist Wick Alexander and installed by T.B. Penick & Sons. It features the San Diego landmarks of the Coronado Bay Bridge, Santa Fe Rail Station, San Diego Missions and Hotel Del Coronado. This mosaic was largely made with tiles from Cuernavaca, Mexico. Lithocrete flatwork seeded with a light green aggregate and saw-cut in an intricate pattern is also part of the surrounding hardscape.

A plaza at the Del Mar Highlands Town Center in San Diego features a LithoMosaic incorporated into a fountain where artist Christie Beniston used more than 20 different blue and green mosaic tiles. The artwork continues on a seat wall sandblasted with dragonfly tails and the quote, “Remember, there is no such thing as a small act of kindness. Every act creates a ripple.” Lithocrete with seeded glass and shells was also used to help the mosaic simulate a ripple in the water. The installer was T.B. Penick & Sons.

Probably one of the most meditative places where you’ll find a LithoMosaic is at the Sellers and Keever activity center at Bayshore Bikeway in Imperial Beach. Located at the far end of the bay in a park operated by San Diego County Parks and Recreation, the center was built to honor two boys who were murdered 20 some years ago while out for a bike ride.

Artist Amanda Conahan worked with the boys’ mothers to design the LithoMosaic which was subsequently installed by T.B. Penick. The Lithocrete hardscape features a nautilus shell that fades from a dark to a light blue. The mosaic contains photos of the boys, glow-in-the-dark tiles and sea glass, often referred to “tears of the ocean.”

To view a project profile on this project, visit: http://www.concretedecor.net/decorativeconcretearticles/vol-14-no-1-jan-2014/a-mosaic-of-healing-and-learning/

A huge seahorse LithoMosaic welcomes visitors to the exterior courtyard at T.B. Penick & Sons’ headquarters in San Diego. The artwork was installed by T.B Penick and the artist was Wick Alexander. Various sized glass and aggregate Lithocrete finishes and poured-in-place custom form-liner walls are also part of the hardscape.

To help promote the feeling of well-being in Solana Beach from Dahlia Drive to Cliff Street along Highway 101, eight places along the pathways connecting the two areas were beautified with decorative concrete. Local Solana Beach artist Christie Beniston designed one of the places along the pathway with handmade tiles to depict the constellations the Milky Way passes through.

LithoMosaics fashioned with variations of the sun can also be seen in several places, many with sedimentary seating walls. Installation was done by T.B. Penick & Sons. Take the Coaster train to get to the general vicinity.

Midway along the three-block expanse, a kiss-and-ride plaza is dotted with LithoMosaic lemon slices, a seasonal stream of blue tiles and an illuminated solar tree. LithoMosaic fruit-crate seats and a red tractor slide mark the beginning of the expanse and a futuristic LithoMosaic plaza is at the far end. A Farmers and Artisans Market is held at the town every Saturday.

Perhaps the largest single LithoMosaic to date, the flower-shaped tiled artwork in the middle of an intersection in Santee Town Center was designed by Amanda Conahan and installed by T.B. Penick & Sons. The ribbons along the Lithocrete crosswalk that lead pedestrians from one side to the other were designed with various shades of blue and yellow glass materials. You can get to this site via the Orange Line.

One of this project’s challenges was figuring out how to install a LithoMosaic this big in a minimum technical standards right-of-way. To accomplish the task, Penick developed an innovative tool that could lift and install each large piece of the mosaic flower petals. Each LithoMosaic piece comprised eight petals, each of which measured 15-by-15 feet

From Shape into Style: An Artist Explores and Explains Good Decorative Concrete Design 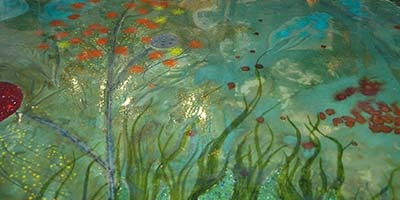 There is a famous paperback called "The Elements of Style" by Strunk and White. Many writers treasure it as a guide to writing clearly and succinctly while avoiding common grammatical errors. The handbook itself is a model of clarity. 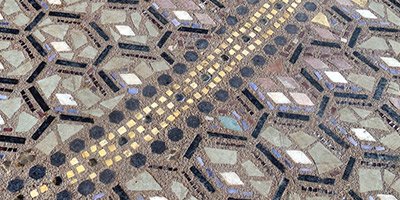