“Graceful Curves.” That’s what Scott Cohen and his team at Green Scene Landscaping and Swimming Pools call a recent backyard masterpiece in Malibu, California. Cohen describes it as the ultimate entertaining backyard that has everything and then some — including a pool that makes you feel like you’re in a giant lake.

Taking full advantage of the 180-degree Pacific Ocean view, Green Scene built a vanishing edge pool with a curved Baja shelf and an extra-deep spa with an illusion edge of water spilling all the way around. A Baja shelf, also called a sun shelf, is basically a platform in the pool that’s about 6-12 inches under water, a perfect spot to sunbathe in the pool in a lounge chair. Nestled next to the water features are a cast-concrete seating wall surrounding a sunken fire pit made from cast concrete and natural stone.

Then there’s the oversized outdoor kitchen with countertops seeded with sea shells, Cantera stone and abalone that’s polished to a smooth-as-glass finish. And let’s not overlook the swim-up bar, “where people in the pool can interact with friends who don’t want to get wet,” Cohen says. “It has that same shell finish and it’s absolutely beautiful.”

To brighten nighttime gatherings, the job’s concrete countertops and cast benches feature recessed channels under the cantilevered edges that include LED lighting. “At night it just glows down the channel,” says Cohen. “It looks really cool.” 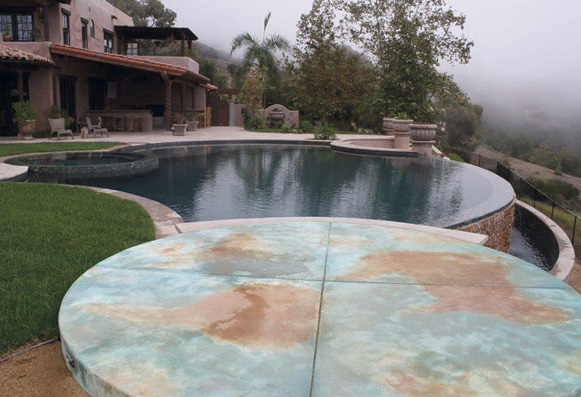 Feng shui first
The homeowners, one a well-known yoga instructor who has been featured on the cover of a popular yoga magazine, wanted a natural free-flowing design that would “pull the Pacific Ocean into the backyard.” She and her husband also wanted the perfect blend of the feng shui elements of earth, water, fire, wood and metal to encourage natural energy flow. In the most rudimentary terms, feng shui is the Chinese art or practice of siting buildings or objects to optimize energy and luck.

The homeowners worked with a feng shui master while deciding on the backyard layout and particulars of the design and relayed those desires to Cohen. Feng shui advocates, says Cohen, “follow the design principles almost like a religion.” While Cohen has worked with masters before, “I have a natural tendency to design within their guidelines without knowing all the rules,” he says. For this project, “No modifications to my design were made.”

With a lot of “ying and yang going on,” Cohen says, the yard centers around a free-form pool with a 40-foot-wide infinity edge where the outer wall is built with tile and stacked stone to enhance the sound of the overflowing water. Cohen placed the large circular sunken fire pit adjacent to the spa which allows the fire and water elements to interact. One of the most interesting feng shui guidelines, he notes, is when you’re combining the elements, fire should be lower than water.

“One of the main principles of any good design, but certainly in feng shui, is the flow through the space,” explains Cohen. “One of the greatest compliments I’ve ever received was that walking through the space feels like poetry.” From above, you can see the project’s sweeping curves repeat a nautilus shape throughout the backyard expanse. 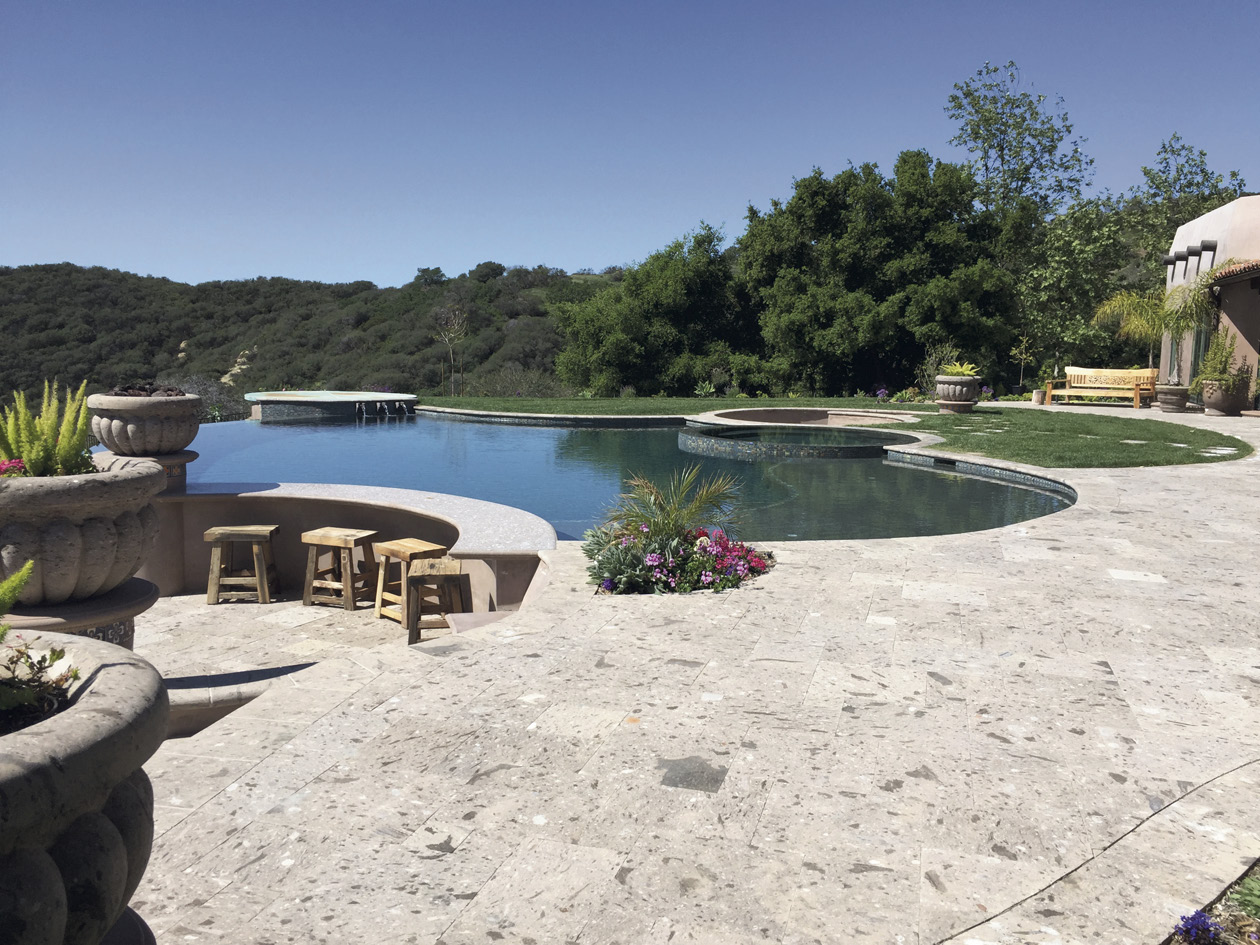 Challenges big and small
Authentic pavers of Cantera stone, a quarried, volcanic rock found exclusively in Mexico and Central America, were used for wayfinding paths that were accented with hand-carved Cantera stone planters and fire bowls. The softness of this stone proved a challenge, Cohen notes, as some of the pavers broke during installation. “Concrete pavers are much more resilient,” he says, “but the client didn’t want them switched out with concrete.”

But the soft Cantera stone was the least among the setbacks Cohen faced. The biggest challenge was overcoming the permit process, Cohen says. “I wasn’t sure we were going to get there.”

It took two years to get the permit to build from the California Coastal Commission, whose mission is to protect the state’s coast and ocean by regulating environmentally sustainable development. It took another seven months to build the job.

“Construction was no easy task,” Cohen says. The pool, built on a slope overlooking the ocean, needed to be firmly anchored into the hill. From a shotcrete standpoint, he says, it was quite a project. It took 120 cubic yards for the footing and another 120 cubic yards for the pool shell. “That’s 12 trucks for the floor and another 12 for the pool.” Typically, four trucks would have done the trick. “But we needed really deep footings.”

In the end, the result was worth all the effort put forth. “This is a great example of good outdoor room design where everything interplays with each other, from the sprawling outdoor kitchen and the deck’s swim-up bar to the conversation area with a fire pit in the center and the infinity spa which has water flowing over all sides,” Cohen says.

“I never tire of going from concept to an idea floated into a 3-D image on the computer to the customer saying: ‘Let’s build it.’ And then when it all comes into fruition and the results are spectacular it’s personally very rewarding.”

Client: A yoga instructor and her husband in Malibu, California

Most challenging aspect: The project had to adhere to the principles of feng shui and pass the scrutiny of the California Coastal Commission. 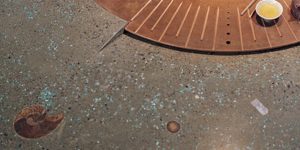 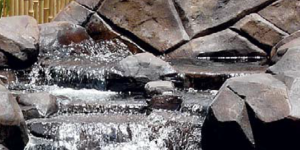