Just as a good cook knows when to use a stand mixer with bread hooks and when to get out the hand mixer with a whip, there are a mixer — and a paddle or blade design — for just about every size job in the decorative concrete industry, as well.

Although many small contractors try to get by using a half-inch drill for their mixing needs, it’s not necessarily the best use for that tool in terms of ergonomics, power and durability. And, if you’re going beyond something that can be mixed in a 5-gallon bucket, it might be time to consider a batch mixer, which is typically on wheels and offers some sort of pour spout, which can be critical both in terms of weight and products with heavier viscosities.

Viscosity is also one of just several factors to weigh when choosing the right blade for a given job. Also critical is whether something should be mixed from the top down or the bottom up, inducing the correct amount of air to the finished mix, and even encouraging chemical reactions to take place.

For anyone doing more than a little onsite mixing, be it an epoxy, an overlay or something else, the right mixer cannot only mean success but happier employees, as well.

No simple answer
There are numerous ways of looking at what’s the best mixer for a specific job or a given product. Getting just the right tool can involve some shopping around and asking plenty of questions.

For instance, Al Karraker, president of the Milwaukee-based Collomix North America, stresses the buyers of his German-made products are often those who require small batch mixing, whether it’s in a bucket or larger mixer.

“We generally define that as being between one and four bags of material,” he says. “I believe that’s also 3.5 cubic feet. Our world is full of guys who will use a drill and buy a paddle when they’re mixing small batches. My job is to change that to a mixer.”

“We have specialty mixers that are meant for epoxy coatings,” he says. “We have others that are very good for mixing concrete. We have bulk mixing equipment that’s used for a variety of different materials, including epoxy, polyurethane, cement overlay systems, as well as overlayments and underlayments.”

As to how large things can go, Donaldson asks — and not rhetorically — “How big do you need it?”

Jon-Don’s overall goal is to make sure its contractors find the right solutions so they’re getting the most out of their products.

On the other end of the spectrum, Ed Kientz, president of Wickenburg, Arizona-based BN Products, says for the company mixing only one or two batches a week, it’s not surprising that a drill-and-paddle looks like a good solution.

“One of the things that got us into this was that so many of our contractor friends were using drills,” Kientz says. “That’s great for drilling holes, but mixing is usually designed to happen over several minutes, and when you’re in a high-viscosity material, you’re burning up the motor of the drill.”

Not surprisingly, BN Products’ first mixer was also a half-inch drill, but with two handles for stability and a high-torque motor to avoid burning it up mixing epoxies and overlays.

A spin on power
Certainly, the need for a separate power source for running a paddle in a 5-gallon pail is open to debate. Collomix’s Karraker, for instance, says the big problem with using a drill is simply that it isn’t designed for mixing.

“If you’re drilling through a 2-by-4, you can do it in 10 seconds or less,” he says. “Mixing, if done properly, is several minutes long. We like to say that a drill is for drilling and a mixer is for mixing.”

Nor does a drill offer other options that a hand mixer can. One is a soft-start feature, which Kientz says can keep liquids from splashing all over if the job involves something such as stucco, where the solids tend to migrate to the bottom of the bucket before mixing.

“The idea is that it can start out slowly and then pick up speed, making it much easier to control,” says Kientz. “For instance, our BNR6400 has a dial on one side of the handle that controls the speed and on the other side it has a button so you can lock the trigger on.”

And, Jon-Don’s Donaldson says product manufacturers often include both speed and paddle recommendations with their materials.

“For example, epoxy resins for floor coatings need to be mixed at a lower speed just so you don’t whip air into the material,” Donaldson says. “You don’t want to create bubbles that can result in blisters in the finished product.”

Donaldson says there are other reasons for leaving the drill for drilling and getting a power source designed for mixing. One is that by getting a device with a higher amperage, the mixer will not only last longer, but also reduce the possibility of it burning out in the middle of a job.

“Also, a higher amperage will typically be able to mix heavier sand-modified mixtures without burning out so quickly,” he says. “If you’re mixing paint, there’s a lower amp draw from the tool itself. But, if you get into some cementitious mixes, it’s a heavy-duty application where you need something that’s going to draw more amps.”

Then, there’s the matter of ergonomics. Mixing with a drill often leaves the person doing the work bent over a 5-gallon bucket.

“If they’re spending eight hours a day mixing, you don’t want them bent over,” Donaldson says. “You want them to have a decent posture so you get maximum performance and they’re more effective at what they do without any long-term physical fatigue.”

In those cases, it might also be wise to consider something larger — and Jon-Don sells batch mixers on wheels and with a pour spout.

A cut at blades
The other ingredient to a successful mixing job, regardless of what you’re making, is the right paddle. Even if you continue to use a drill for mixing small jobs, the correct paddle is a must.

“Seven out of the eight sizes we make are used with concrete and epoxy,” says Dooley. “A lot of epoxy manufacturers actually spec our mixers.”

The reason, she explains, is that Jiffy offers blades with three-way action, as well as two guard rings on them to keep the blade from damaging the container in which they’re mixing.

With a variety of blade configurations, Jiffy is also happy to help customers choose the best one for a specific need. Additionally, it’s important not to undersize or oversize, Dooley says.

“Not only do you waste space, but you might not have enough depth to mix the product well,” she says. “If you only fill a 5-gallon bucket a quarter of the way up and put a larger blade in there, it won’t mix thoroughly because it won’t be immersed in the material.”

BN Products’ Kientz says for many people a single paddle will do. However, they need to make sure they’re getting the right configuration.

“There are all kinds of different paddles and they’re all designed for different types of materials,” he says. “One is great for adhesives, and another is just for paint. Different paddles have different functions, and then some of it is personal preference.”

He adds that his staff is happy to advise people on the best paddle for a given use, based on what they’re mixing, including the pros and cons of different designs.

Collomix’s Karraker echoes Kientz. He says anyone looking to buy a mixer shouldn’t hesitate to call and ask for advice.

“We always ask, ‘What are you mixing, how much and how often?’” he concludes. “That way we can direct the person to not only the right machine for their particular job, but also the right paddle.” 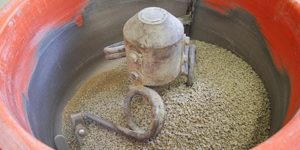 Choosing the Best Mixer for Your Countertop Concrete 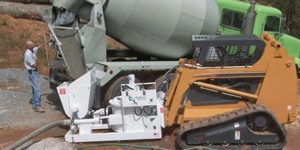 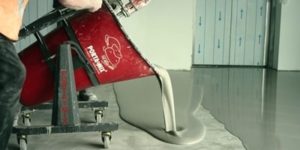