Concrete patios and pool decks have long set a standard for basic backyards. But today’s consumers want much more than the basics and the industry is complying. Due to more efficient tools and techniques, complex designs can be installed quicker, easier and at a fraction of the cost. And thanks to an improving economy, the consumer has more money to spend.

Rick Lobdell, Concrete Decor columnist and owner of Concrete Mystique in Nashville, Tennessee, still has clients asking for gray-on-gray stained concrete. But “I usually talk them down off the gray ledge,” he jokes. He’s beginning to see a trend beyond “boring tile patterns,” he continues. “People are willing to spend a little more for something really cool.”

Andy Jones is the owner of Core 9 Design in Oklahoma City. He got into staining and overlays in 2003 and later began offering outdoor amenities such as concrete countertops, precast fire pits, and color-shifting and glow-in-the-dark patios. “We’re incorporating things like glow resin in pool decks and using glowing aggregate, so when it’s dark outside parts of the pool deck are glowing,” he says.

He thinks many of his customers ask for more sophisticated work partly because of the faster turnaround. “Some of the stuff we do in a couple days used to take a week,” because the material took longer to dry or cure, he says.

Besides the time reduction, people are more in tune with possibilities, thanks to sites such as Pinterest. “People aren’t just asking for what their neighbors have anymore,” Jones says. “They see things (on the internet) that strike their interest and they ask for it.”

When customers ask for yawn-worthy gray or walnut, Jones tells them they can add special effects with metallic pigments in the sealers. “When the light hits it right the whole pool deck could look like shimmering blue or green or copper,” he says.

“People usually start with what everybody’s doing and by the end they’re mixing colors for a one-off project that we couldn’t duplicate even if we wanted to,” he says. Lately, “We’ve been doing that a lot.”

Jeremy Bayliss, an Army veteran and artist who owns DelRailey Designs in Dothan, Alabama, incorporates cracks into stone designs on concrete patios or driveways. Many of his customers don’t have large budgets and fixing their cracked concrete is more appealing than replacing it. “We figured out a way to make it look nice and save people some money,” he says.

Bayliss cuts into the cracks to even up the edges and also cuts additional grout lines. “Once everything is cut in we use a decorative saw blade to carve everything so there’s three dimensions to the grout lines and they look like they’re below the surface of the stone.” He fills the grout lines with colored concrete in tones that match the home and then resurfaces the whole thing with Elite Crete products.

In Alabama, he notes, people want designs that look like tile, wood or stone. “I try to steer people away from brick and paver looks because it got overdone,” says Bayliss. “We came up with cutting the cracks in the concrete and we’ve been doing more of that since people are seeing it and wanting it,” he says, adding that one job they did went viral. “It got popular really quick.”

Lenny Maffei, has been with PoolCorp for the past 34 years. PoolCorp is one of the world’s largest wholesale distributors of swimming pool and related backyard products. Maffei says people want bigger and better.

“The backyard is getting to be more of a destination than just a typical backyard,” Maffei says. “People are spending more money on their houses and want the whole outdoor experience. They want a resort in their backyard.”

He says using glass and tile in swimming pools is a growing trend, and lagoon-type and vanishing-edge pools and spas remain popular. Technology allows homeowners to control heating and lighting with a smartphone app. Maffei is also seeing increased interest in energy efficiency, including solar heating. “The typical pool is not so typical anymore,” he says.

In Southern California, where Maffei lives, the sanded finish, where chemical retardants etch away a thin layer on the surface to expose the sand matrix, is popular. Stamp patterns that mimic wood are also increasing in popularity.

Bart Sacco, owner of Kingdom Products in Throop, Pennsylvania, says outdoor areas continue to draw huge interest. “People want an outdoor oasis,” he says. “You see a lot of pizza ovens and outdoor fire pits. Generally you would just see that outdoor living trend in the warmer climates but it’s made its way here.”

Sacco, who manufactures decorative concrete products, notes traditional fire pits remain popular. However, he states people are more interested in the newer propane ones. Adventurous customers want features that combine water and fire in a gas-burning fire pit. In short, “The things people ask for are getting fancier,” Sacco says.

Case in point: Emil Gera of Gera Concrete, near Sacco’s area of northeastern Pennsylvania, recently completed a 7,000-square-foot pool and patio space. “Everybody wants fancier and bigger,” Gera says. “Used to be if you had a 600-square-foot patio that was decent size. Now that’s on the bottom end.”

This job had a custom-cut floor design. It also had three defined sitting areas with a hardscape system installed and carved by Nathan Giffin of Vertical Artisans. “We poured all the caps on the walls to make them look like pieces of stone,” Gera says.

In his neck of the woods, Gera says, outdoor kitchens are considered too much like “work.” Pennsylvanians want something different, he continues. “They’re wanting a place to sit and relax. They want to come out on the patio and be on their own little vacation.”

Scott Harrison, sales manager of Mulitcoat Corp. in Rancho Santa Margarita, California, is seeing a lot more stamped overlays. “Everyone is asking us, ‘How can you take my patio and distinguish between the areas?’” he says. “You can separate the different areas using designs, and I see that as a trend.”

Harrison says what used to be possible only on a resort level is now affordable for residential projects. “Stamp overlay is something that has taken off all across the country because there are more options, more colors, more designs and people are better at it now,” he says.

“Stamped overlays showcase what you can do at an affordable price. Used to be, it cost $30 per square foot,” and jobs were few and far between. “Now it’s $12 a square,” with a laundry list of colors and options. “There’s nothing else that will provide that many options at that cost that will last,” Harrison says.

Todd Fisher of Unique Concrete in West Milford, New Jersey, has seen a switch to more contemporary color schemes. “People are asking for concrete that looks like concrete,” he says. “They like the more minimalistic, cleaner lines and contemporary colors such as grays and whites.”

However, he concedes, many of his customers ask for ashlar slate and fieldstone, often in browns and tans. “People are interested in that look of a bluestone patio or a fieldstone,” he says. “If they’re going with an ashlar pattern they’re showing us inspirational pictures of actual bluestone and asking if we can replicate that. People want stamped concrete to look realistic.”

Pools are getting more inventive, too. Insurance companies charge homeowners more for diving boards, so customers are replacing those with dive rocks. Whereas they don’t ‘spring’ like boards, they provide a jumping-off platform and visual interest.

“That’s another thing,” Fisher says. “People are getting away from that ‘city pool’ look so they’re making the pools and spas look more natural so they fit into their yard. People are looking to create a more natural area outside their home.” 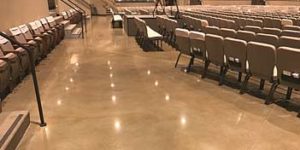 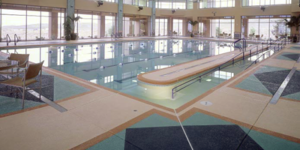 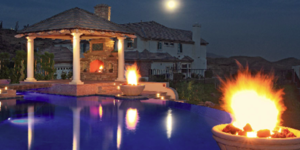