In the decorative market, that includes a host of sealers that are typically acrylic-based and leave a clear thin film on the concrete’s surface when the solvent- or water-based carrier evaporates. Whether it’s flat or stamped, colored, stained or polished, the goal is to show the concrete to its best advantage.

However, there are many concrete uses where a coating is used for its durability — think garage floors, shopping malls, food-processing plants — and while builders and facilities operators don’t mind showing a pretty face, their biggest concern is adding to that durability.

“They’re used anywhere you have a lot of traffic,” he says. “They have high solids, and they’re extremely chemical-resistant. Gasoline doesn’t bother them, brake fluid isn’t going to bubble them up, and they’re FDA- (federal Food and Drug Administration) compliant. There are no microscopic pores for something like E. coli to grow.”

However, choosing the right coating for a job often comes down to the same issue many other contractors and craftspeople find it hard to argue against, and that’s money.

“Whenever we talk with a contractor who has a client who’s looking for an application for their floor, wall, roof or whatever, it always comes down to three things,” says Jeremy St. Clair, technical director of Orange, California-based Kretus Group. “One is performance, two is cost and three is aesthetics. Often, they’re worried about the cost.”

Scott Kummer, a contractor who owns Laguna Niguel, California-based Visions Below and also independently sells and consults on products, puts it a little more strongly.

“Everything we do seems to be predicated by price,” Kummer says. “It depends on the contractor, and how they’ve been trained and their knowledge base. If they abide by the manufacturer’s directions, they might not realize a job needs moisture mitigation or to save money they won’t use a moisture-vapor primer.”

For too many coatings contractors, the desire to get a job means they’re willing to cut corners, and there are many ways to do it. Kummer says that includes using a less-expensive product, not applying it to specifications, as well as inadequate preparation.

“A lot of guys new to the industry who are using good quality products don’t understand what the problems could be,” he adds. “You always have to anticipate problems and stick to the biggest firing power you have at all times. Develop a regime, stick to it, and if anybody’s asking you to vary that due to price, it’s not worth doing the job.”

Multiple answers
Simply choosing the best coating for a job isn’t going to be easy. Most manufacturers offer a plethora of formulations, although Kretus’ St. Clair says there’s a good reason for that.

There are also differences in performance. Increte’s Cofoid notes that epoxies — while a popular coating — are pretty much confined to indoor spaces.

“While there are some exceptions to this rule, most epoxies on the market today are not UV (ultraviolet) safe,” he says. “Given enough UV exposure, they’re going to go amber. By comparison, a polyaspartic or a water-based urethane is typically crystal clear.”

Each has other issues, as well. Urethanes are often waterproof, which can be a positive or negative attribute, depending on the situation. Visions Below’s Kummer says whenever the surface is retaining moisture, using a urethane can be like putting cellophane over your face.

Cofoid says one answer is to do either a moisture test or a relative-humidity test on the concrete. Fortunately, he says methods for testing both are less expensive than they have been in the past, and each product manufacturer should have guidelines for when the moisture is too high. Still another option is core sampling.

And, if the moisture is too high, then it’s time to switch to another product — or find a manufacturer who has a moisture mitigation system.

“There are products that go down that help lock the pores of the concrete to lock the moisture in, so it doesn’t travel up through the floor coating and create delamination problems,” he says.

Although they’re used primarily on interior applications, epoxies remain a favorite for residential use, although less so for commercial applications.

“If you need something that’s chemical resistant or carts will be dragged over it, or it has to survive thermal shock, you’ll need something like a urethane polymer concrete,” says Kretus’ St. Clair. “Even how they’ll clean the floor plays a role.”

It’s those epoxy/urethane hybrids — typically two- or even three-part systems — that are taking coatings into the future.

“There are a lot of situations where you can’t expect longevity out of a single coating,” he says. “We need to step up the chemical chains or bonds that are created. With a triple-component product, we’re combining three different types of chemicals to get longer bonds to strengthen it.”

However, again that goes back to both the contractor and client understanding what’s truly needed for a job.

“I’ll get somebody who says they want an epoxy coating because they’ve heard of it, or they’ve seen pictures,” St. Clair says. “And, they want a single coat application that will last 15 years.”

Words to the wise
With coatings, it truly can be a matter of better living through chemistry, but specifiers and contractors must be aware of getting just the right product.

One that’s catching the eyes of many is polyaspartic. Increte introduced a new polyaspartic at World of Concrete this year, and Cofoid says it’s like an epoxy in that it’s a two-part system. However, it’s also crystal clear and UV safe.

Still, its biggest advantage is its extremely fast curing time.

“Say that you’re doing a facility that can only be shut down one evening,” he says. “You can go in at 10 p.m. and it has to be open at 8 the next morning. An epoxy will take eight to 10 hours before you can even walk on it. Nobody would suggest dragging furniture across it, but with a polyaspartic, you can put it down at 6 a.m. and if need be the business can open back at 8.”

There’s also a segment of the market that’s becoming more concerned about the environmental impacts of these products. Some of that is driven by state regulations, such as in California, and some by architects anxious to qualify for points under systems such as LEED (Leadership in Energy and Environmental Design).

One approach Glenn “Buster” Osteen, technical director for Tampa, Florida-based McKinnon Materials, cautions against is manufacturers who “concentrate” their products by removing the solvents to appear green.

Ryan Stowell, a contractor who owns Advanced Epoxy in Wichita, Kansas, says he probably runs into two or three clients a year concerned about the environmental impacts of their coatings. Whether or not they are, he advises anyone in the industry to stay updated on what’s available.

“I do my homework nightly, and I’m always looking for new options,” he says. “I go to my mentors among the manufacturers, and they keep me up-to-date on what’s new and what’s going to be coming out. And, I do a lot of reading online.” 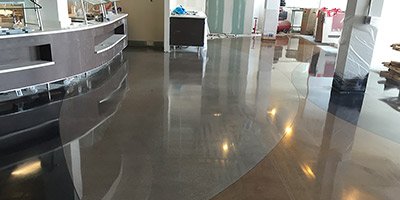 Ohio State University experienced a growth spurt this past summer with campus-wide new construction and renovations that continued well into 2016. 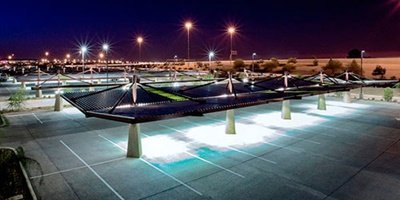