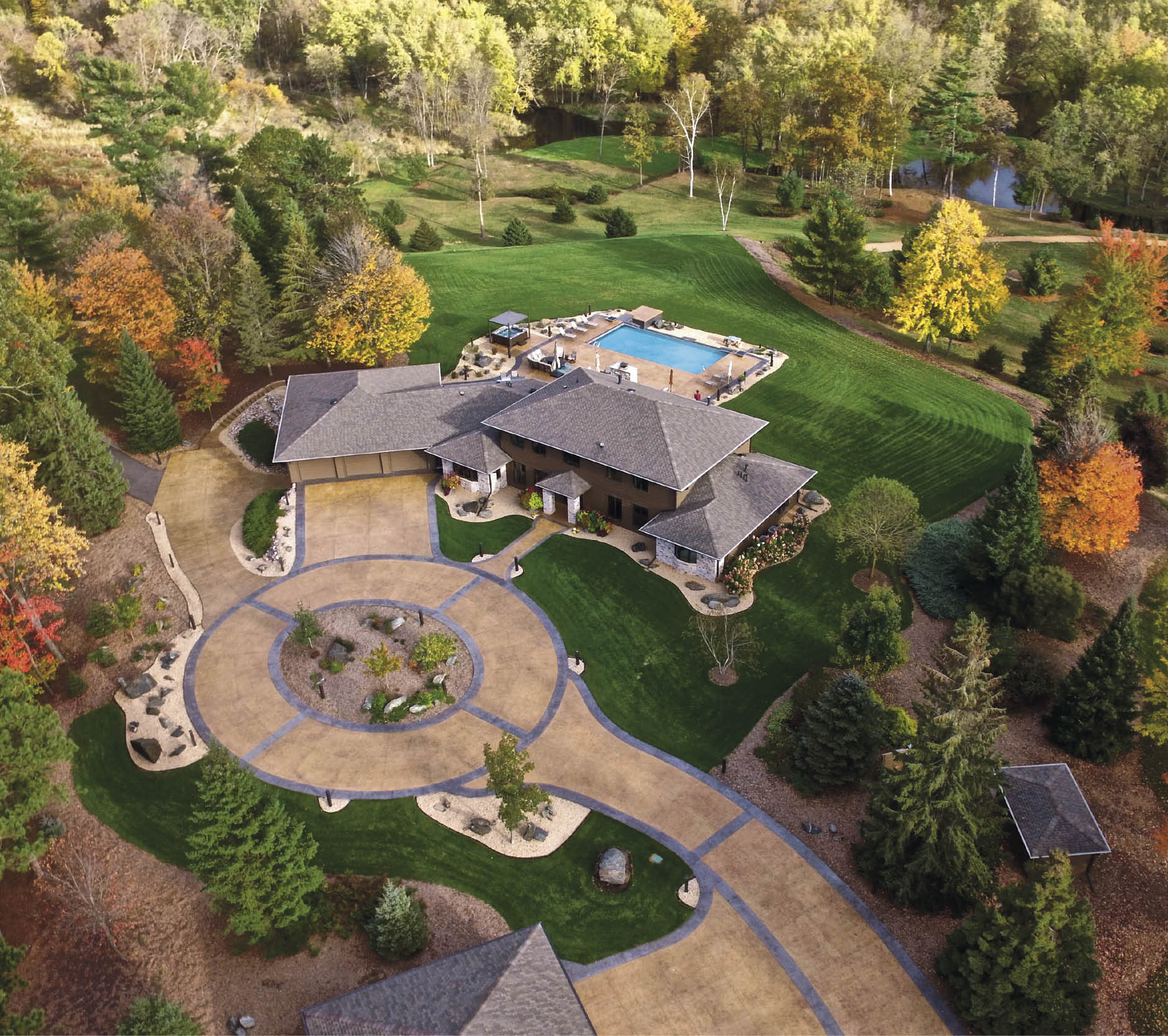 Want to impress your next multi­millionaire (or billionaire) client?

Well, just take a look at what Alchemy Concrete came up with in the way of decorative concrete inspiration for a mega-upscale residence in Stevens Point, Wisconsin.

As Judah Haas, Alchemy Concrete president, tells it, this project involved completely reconstructing the surface of the residence’s winding, 1/4-mile (or more) asphalt driveway, and expanding the front driveway entrance with a turnaround and landscaped courtyard.

Not visible in this major front entrance redo is the pavement heating system under some 30,000 square feet of driveway, with foam insulation underneath.

Alchemy Concrete used different shades of integral concrete coloring, two types of stamp textures, and extensive decorative sawcuts to produce the highly diverse, decorative driveway surface. For the center of the driveway, a sandstone color and slate texture were used, while the pavement border features a charcoal color and a Butterfield Color texture called Hadley Creek Shale. The decorative sawcuts in the border give the impression of a hand-laid stone surface, Haas says.

Additional highlights were added with three different colors of waterborne stain, and Butterfield’s Perma-Tique antiquing agent was applied to the entire surface for increased variegation. A clear joint filler was used in all joint cuts, and two coats of a solvent-borne acrylic sealer completed the surface treatment.

A major feature of this dramatic new entrance is a decorative, curvilinear retaining wall, fashioned with the same integrally colored concrete and stamped stone pattern used for the driveway border.

Haas collaborated with the landscape design firm Rettler Corp. and the owner to formulate this major redesign and installation project, which involved sampling extensive colors and decorative patterns in the evaluation and approval process. Tom Dunbar, Alchemy Concrete director of design, also played a key role in designing the project.

The project won a 2017 first-place award from the American Society of Concrete Contractors Decorative Concrete Council for cast-in-place stamped concrete, over 5,000 square feet.

Alchemy Concrete followed this award-winning entry with another honor, a 2018 award for a second phase of decorative concrete work in the backyard of the Stevens Point residence. This project encompassed reconstructing a pool complex, with waterfall and concrete colors and textures that continued the themes of the redesigned front entrance.

Getting the ‘wood’ treatment
It might be said that the imaginative redo of a concrete front porch of a modest residence in Seneca, South Carolina, lands on the opposite end of the scale from Alchemy Concrete’s sprawling decorative masterpiece in Stevens Point.

But both projects share the concept of decorative concrete treatments that speak to the natural surroundings, and both are the result of creative interpretation and visual artistry.

Intricate Concrete of Bay City, Michigan, trekked hundreds of miles south to work its magic on the residential front porch in the Palmetto State. Jason Holsapple of Intricate Concrete says he sought to do a “one of a kind thing” with the porch project, as opposed to a conventional stampable concrete update.

He also envisioned a rustic treatment that reflected the wooded setting and traditional regional architecture of the home. The result is a surface with the appearance of wood planks but the composition of concrete.

To achieve the faux-wood effect, Intricate Concrete got things rolling by grinding the surface’s aged and degraded sealer, using 40-grit diamond tooling. This was followed with applying a bonding agent, then troweling on a cementitious skim coat. The same overlay material was subsequently applied between 1/8 and 1/4-inch thick, troweled in the same direction to produce an irregular parallel texture evoking a wood-grain surface.

After the concrete dried, Intricate Concrete used a carbide scribe tool to sculpt the grooves to make the surface look like wood planks.

Finally, Holsapple used a palette of waterborne stain colors to complete the picture — a combination of brown and amber shades blended to render the highlights and darker tones seen in a stained, wood-plank floor.

Intricate Concrete installs overlays on a regular basis, Holsapple says, but creating the faux-wood porch floor was “something new. It’s a good fit for the house and the setting.” 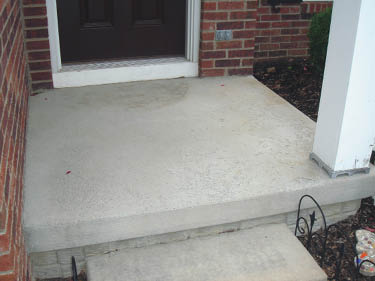 What a grind
The inherent decorative qualities of concrete itself often take center stage in exterior restoration projects taken on by Concrete Contracting Solutions of Columbus, Ohio.

A recent concrete porch job offers an illustrative case study of the company’s trademark “grind and seal” technology, says Chris Paisley, founder and president. In that instance, a scaling and flaking surface was removed using a hand-grinding tool with a dust-collection system. It took 3 to 4 millimeters off the pitted surface to expose the concrete’s larger aggregate. A decorative concrete sealer was then applied — a high-solids, acrylic, glossy clear finish that accentuates the aggregate colors.

This grind-and-seal approach, says Paisley, offers a cost-effective alternative to tearing out the existing, degraded concrete or installing a resurfacing material.

“Only the surface was in bad shape,” Paisley says of the porch project. The grind and seal, he says, “is the best option for the money, in our view.”

The process has been used on driveways, walkways, patios and other exterior surfaces, in addition to porches, Paisley says. Variations on the grind-and-seal theme include the addition of a color — grind, stain and seal — or combinations.

Paisley cites a project where a decorative stamp installation went wrong and he was called in to devise a fix. He removed the stamp pattern by grinding it to expose the aggregate and stained a border strip to add color. A clear sealer was applied, resulting in a decorative, colored and exposed-aggregate creation.

Paisley cites the geographic diversity of aggregate as a source of decorative gems exhibiting varied colors and shapes. Examples include red rock and black granite in the Rocky Mountain region; the black, white and crystalline composition of granite in New England; limestones and sandstones from the Ozarks; seashells in Florida; pink granite from the Appalachians; and quartz from multiple corners of the continent.

This multifaceted aggregate palette serves as a centerpiece of the grind-and-seal approach favored by Concrete Contracting Solutions.

FuTung Cheng, of Cheng Design, says the steel and concrete elements are integrated with the building itself to create a palette of colors and shapes. Inspiration comes in part from the noted 20th century Italian architect Carlo Scarpa, whose designs reflected the work of artists and craftsmen.

This isn’t simply a dramatic residential entryway. It’s an invi­tation to experience an interpretation of natural phenomena.

“The necessity of a 50-foot vertical rise from street-side curb to front door set the design idea in our minds: reflect the experience of a small canyon hike up a narrow rock outcrop path flanked by sheer rock face walls, under the canopy of an occasional tree,” says Cheng.

“Precast, carved-out concrete steps, flanked by tall, board-formed walls lead the way up the sculptural ascension walk. Like a concrete canopy to a modern cave, the underside of the massive cantilevered second-floor deck shelters from sun and rain.”

Cheng adds: “The integrally colored walls are homages to the work of the late Italian architect, Carlos Scarpa. They are embossed with modern, petroglyph-like relief designs from molds made in our casting fabrication shop. 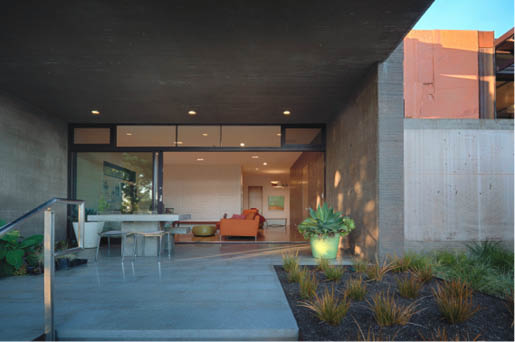 “The textured concrete exterior walls have resonance throughout the house interior with our proprietary, ultra-smooth, crafted concrete countertops, vanities, sinks and wall surfaces.

“The almost nature-walk feeling of moving through the spaces permeates down to the finest tactile details and everyday surfaces of the architecture.” 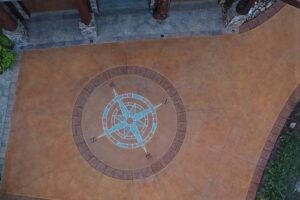 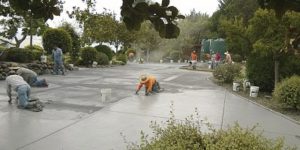 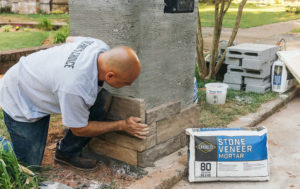