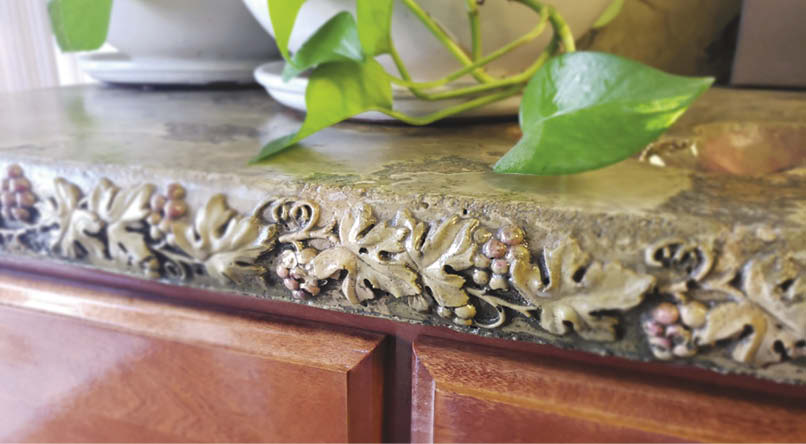 Although rocker Huey Lewis made headlines singing how it was “Hip to be Square,” artisan Ben Ashby couldn’t quite jibe with that mantra when it came to concrete countertops. Back in the early ’90s, others in the fledgling decorative concrete business — like FuTung Cheng and Buddy Rhodes, he remembers — were perfectly fine with square-edged countertops but Ashby wanted more for his creations.

So in 1992, Ashby introduced two edge forms, Imperial Rope and Raphael Oak Leaf (pictured above). “When people saw those, they went crazy,” he says.

Back then, as he does today, he made the molds out of polyurethane using a self-taught method he learned about in a book. “I just started playing and having fun with the polyurethane,” he says. “That’s how I learned.” Although even the book advised formal training, “I never did take a class.”

Today, his company, StoneCrete Systems headquartered in Orem, Utah, offers more than 30 easy-to-use molds for countertop edges. You can use the molds alone or combine them for more intricate patterns. All are reusable.

To install, just set the mold in place and run a small bead of silicone around the edge and you’re ready to pour. Once the concrete is dry, the pliable molds release without a hitch. Sanding molds in between jobs isn’t necessary, Ashby says. 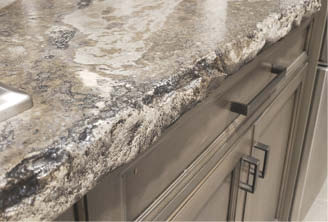 To precondition the mold for the next use, he suggests spraying Howard Orange Oil — “Not any ol’ orange oil; it has to be this brand” — on the inside of the mold and wiping it down. “Don’t use a lot,” he cautions, “because it will transfer to the concrete if you’re not careful.” You should also store your molds in a dry cool place as sunlight will leech the oil out of them.

To do a typical sized job, you need four or five of his edge moldings, which are 8-feet long and available in varying widths. “Don’t cut if you don’t have to,” Ashby advises. “Cutting is the biggest way to ruin a mold.” On average, he estimates, you can get 500 uses off a single one.

His Broken Flagstone edge (above), which he first introduced about 10 years ago, is by far his most popular design. “I sell more of that edge than I do all others combined,” he says.