Amid the razzle-dazzle of Las Vegas, you’ve got some pretty stiff competition if you’re vying for attention … especially if you’re a lowly floor.

“A lot of times the floor blends into the surroundings and you don’t even notice it,” says Amedeo Cilli, president of Concrete Concepts of New Jersey Inc. and a licensee of Artflor by Tri-Co Floors. But that’s not the case when you enter the food court of the Las Vegas Convention Center’s South Hall, where two Christmases ago Cilli helped Artflor put in a floor to rival the most colorful in the city. “The colors on that floor are so vibrant — almost neon — that you can’t help but notice them when you walk up. They are that stunning.”

With names such as Caribbean Tide, Empire Blue, Majestic, Basalt Gray and Sangria Passion, to name a few, the colors live up to their lively monikers. And the Artflor», as beautiful as it is, was installed in three weeks time in practically round-the-clock shifts.

In the beginning
As the story goes, the project was a little behind, says Tina Anderson, president of Tri-Co Floors out of San Diego and the subcontractor for the food court’s 21,000-square-foot floor. Her crew, an ensemble from Las Vegas, San Diego and New Jersey, didn’t get in there until the third week in December, she remembers, and they needed to be done by early January.

“There was a real time crunch on this project,” says Penny Steward, who works out of the firm’s Las Vegas office as director of sales and marketing. Steward worked hand-in-hand with the architect of record, Jacobs Engineering, to tweak the floor’s design. The convention center had a show booked for January, she says, and if Tri-Co was going to pull this off, they were going to need some help.

Artflor’s part of the project entailed seven different colors of flooring for seven concession stands, which encompassed 12,513 square feet with 5,873 linear feet of saw cuts. Add in another 8,591 square feet, eight more colors and 2,692 linear feet of saw cuts for Starbucks and the food court — plus a logo for the convention center — and they were looking at a pretty hefty job.

“Tina called and said, ‘What are you doing?’” recalls Cilli. ‘Not much,’ I said. ‘How would you like to get on a plane tomorrow?’ she asked. She needed help, and when a friend calls you go. I packed up five of our people and we jumped on a plane and flew to Vegas.We worked until Christmas Eve, flew back for Christmas and flew back the day after. We worked until New Year’s Eve,” when, he fondly remembers, he made his wife’s New Year wish come true by coming home unexpectedly just minutes before midnight.

“We couldn’t have done it without them,” Anderson says about Cilli and his crew. A lot of sacrifices were made to complete the now memorable job.

Delving into the floor
The convention center floor was created with Artflor, a series of several systems marketed by Tri-Co and installed by licensees nationwide. Touted as functional pieces of art that offer design flexibility to the max, Artflor can be applied both vertically and horizontally, inside and out. Some systems, such as the one used in the convention center, are troweled on. Other systems are self-leveling. The systems basically mix and blend different mediums together to get a desired end product.

Artflor is a cementitious and polymer mix that Tri-Co refers to as “architectural concrete.” The look you’re trying to achieve, the budget you have to work with and the existing substrate (if applicable) will determine the system that meets your needs. “It’s more of a technique than a specific material,” sums up Cilli. “It’s not a specific product.”

Trademarked about five years ago, Artflor can be made in any color imaginable, Steward says, as her company has a chemist on staff whose job it is to do just that. “We can match anything. All we need is a piece of carpet, a paint chip, a swatch of something or a Pantone color and we’re there.” There are 42 standard colors in the trowel line, she adds, “but we create custom colors all the time.”

In addition to the integral color in the flooring, Artflor employs special techniques — with such names such as coral reef, splash and wash — to expand the custom design options.

The architectural flooring can also be stamped, grouted and divided with metal. Some of the systems can incorporate various aggregates into the topping, including crushed glass, flat button pearls, computer chips, even watch parts. Colors can be swirled, blocked, shadowed, accented … the design potential is endless, Anderson says.

“We’re always evolving,” Steward says, “and we offer ongoing training and help from our technical department because we’re constantly introducing new products and better ways of doing things.” Concrete tiles made in San Diego, for instance, incorporate photo imaging. “We can place images on tiles so you could create huge murals. You wouldn’t be able to see the image while you were walking on the tiles but you could see it from up high. It’s a neat concept. I’d really like to do one of these in a courtyard where there is a cluster of high-rise buildings.”

The Artflor systems are more popular on the West Coast than the East, but interest is spreading across the country, Steward adds. “We create works of art; no two creations are the same. Our people are more like artisans than laborers,” Steward concludes. “There’s not a lot of room for error. People walk on our jobs and have no idea that it’s architectural concrete. And if we’re doing our job right they can’t tell and they really don’t need to know anyway.”

As a company always striving to help its customers in every way possible, Prosoco has unveiled a series of educational sessions and panel discussions at the upcoming 2017 World of Concrete, Jan. 16-20, in Las Vegas. 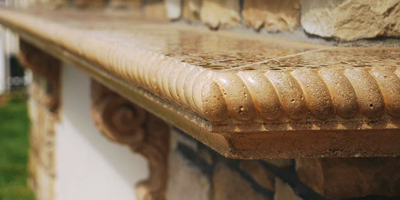 Unlike water and oil, glass and concrete do mix and can marry well under the right circumstances. On the other hand, the union may not remain solvent if the chemistry isn’t there to deter the main reason this coupling would meet its demise: alkali-silica reaction (ASR).